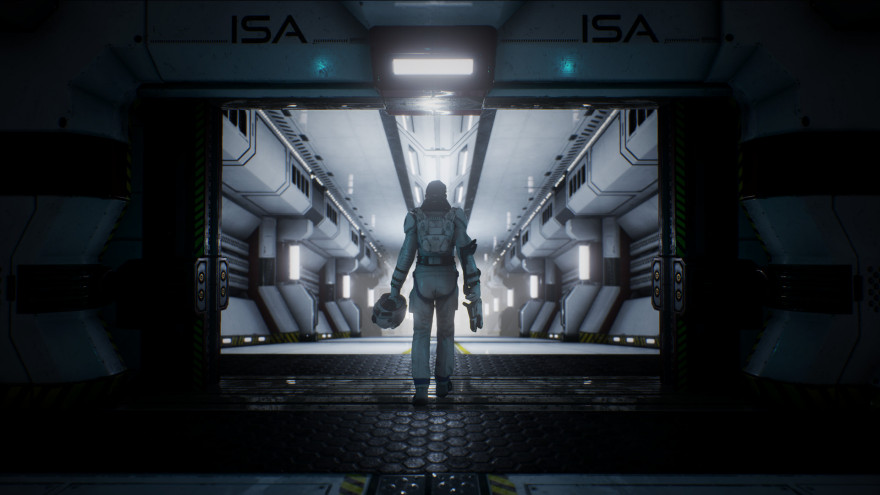 UK-based studio Bulkhead Interactive has released an announcement trailer for their upcoming game The Turing Test, slated for release on Xbox One and Steam in August 2016. It’ll have you playing as Ava Turing, an engineer for the International Space Agency (ISA), as she investigates the truth behind the ISA research base on Jupiter’s moon Europa. As you dig deeper into the moon’s frozen core, the game aims to explore the phenomena of consciousness and challenge the meaning of human intuition.

How it will manage this is through the format of a first-person puzzle shooter that features obstacles designed in a way so that only humans can solve them, as opposed to machines. It’s here that the game starts to draw a parallel to the “Turing Test” of the game’s title—the test developed by Alan Turin in 1950 to determine if a machine can exhibit intelligent behavior that is equivalent to a human’s. Puzzles are solved in The Turning Test by using the Energy Manipulation Tool (EMT) to transfer power from one object to another. You can also power up and take control of the artificially intelligent machines to be found in the environments, which plays into another deviant on the game’s main theme: the human struggle for control.


In an age in which technology is rapidly advancing, the ideas of artificial intelligence and space colonization are no longer inconceivable thoughts. We’re planning on sending humans to Mars, attach inflatable habitats to the International Space Station (with the possibility of opening up space tourism in the future!), and have discovered plants with the ability to house microbial life. The Turing Test slips in easily with all the discussion around these advances, but also other fictions probing the question of artificial intellligence, such as last year’s Ex Machina and 2014’s Transcendence.

It seems humanity is destined for the stars.

While current games set in outer space serve to fulfill the need for human exploration or satisfy the urge to solve problems creatively, The Turing Test brings morality into the equation. The discussion that places man against machine has always been grounds for controversy. This game looks to transcend the boundaries between artificial intelligence and humans through its multi-layered story of introspection and morality.

You can find out more about The Turing Test on its website. It’ll be out for Xbox One and PC this August.