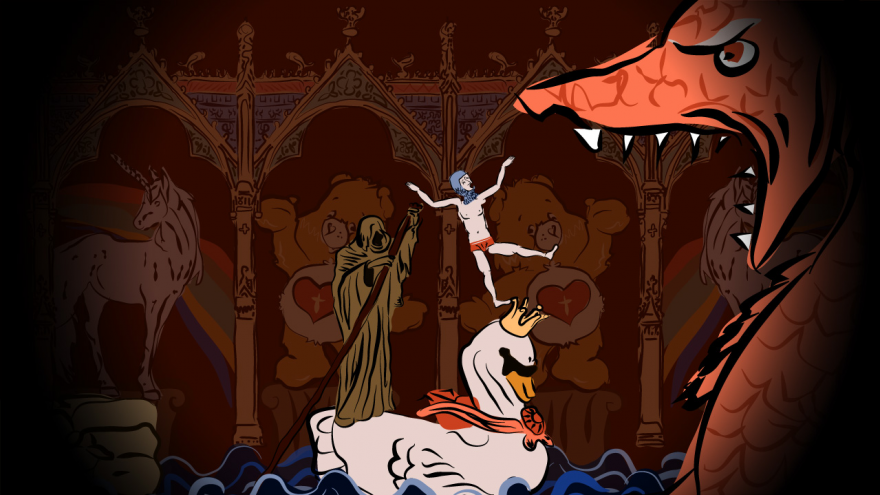 The Kickstarter for a videogame called Lancelot’s Hangover has gone live today. As a parody of the King Arthur myth of the utmost sophistication—including drunks and rapping bears—it demands a rigorous examination of Arthurian literary history. That means it’s time for a crash course in Arthurian literature—go!

King Arthur narratives have gone through a number of unique iterations over the years. Originally a Welsh figure whose brave exploits were described at length in writing and through the oral tradition from around the 7th century until the 11th century, Arthurian stories were popularized by Geoffrey of Monmouth in his Historia Regum Britanniae (1136), or History of the Kings of Britain. In this work, Geoff chronicles a highly romanticized and fanciful version of the King Arthur tale.

The 12th century French author Chretien de Troyes decided that the hero in this story didn’t have enough of a posse—thus the addition of the Knights of the Round Table—and lacked a distinctly religious ambition—thus the quest for the Holy Grail. He also decided that Arthurian literature wasn’t saucy enough and introduced Lancelot, who seduces Guinevere into cheating on her beloved (800-year-old spoiler, sorry). From here on out, Arthur found himself increasingly pushed to the sidelines of his own stories.

In more modern adaptations, Arthurian literature is tempered with contemporary concerns. Alfred Tennyson’s Idylls of the King (1859 – 1885) and similar works use Arthur as a role model for Victorian concepts of chivalry. In the 20th century, T. H. White uses the lore as a means to tackle relevant themes such as war, power, and justice in The Once and Future King (1958). Marion Zimmer Bradley’s The Mists of Avalon (1982) gives the tradition a much belated retelling from the women’s perspective. But most significantly, Monty Python finds that the legend severely lacked enough butts and non sequiturs and creates Monty Python and the Holy Grail (1975). And now, from this incredibly rich and complex tradition, solo game creator Jean-Baptiste de Clerfayt has been inspired to create Lancelot’s Hangover. Phew, take a deep breath.

The premise of Lancelot’s Hangover is simple. God commands Lancelot (“the sexiest Knight of the Round Table”) to seek the Holy Grail in the most treacherous, sexually confusing place in all of Europe: the Kingdom of France. Once Lancelot has claimed the grail, he is to put booze in it and put on the greatest party in England. Now you may be asking: Why, out of all that sophisticated history you just spent half the article explaining, did Jean-Baptiste de Clerfayt decide to pull from the most juvenile of the whole lot? Well, because it’s amazing, that’s why.

Monty Python humor is notable for its relentless silliness. At times even to its detriment, the comedy troupe stops at nothing to create more and more ridiculous sketches, gags, and bizarro world asides. Yet despite their seemingly nonsensical approach to comedy, Monty Python is actually quite intelligent beneath the surface. While brimming with sex jokes and comical murder, Monty Python and the Holy Grail actually knows their source material through and through. They play with concepts of medieval chivalry. They mock holy men, plague-worn peasants, and witch hunts in equal measure. In knowing the subject of their ridicule so well, they are able to make the most delightful jabs at it.

Lancelot’s Hangover aims to live in the shadow of Monty Python but also takes from other sources. Clerfayt cites inspiration from Monkey Island for its point-and-click adventure format; he cites South Park for its politically incorrect (though, he notes, in no way malicious) humor; and finally cites Arthurian legend as its background. Three out of these four pride themselves on silly humor. So, yeah, sorry Arthur. To be fair, we are already over-saturated with self-serious King Arthur stories. Lancelot’s Hangover aims to stick its tongue out at all those grim faces and pokes fun at the somberness of much of the tale, bringing the ridiculousness up to 11.

“I’ve always been fascinated by this story,” Clerfayt explains. “Why do the Knights of The Round Table go find the Holy Grail? Because God wants to! No more reason needed. It was, for me, the best setting for nonsense humor. Why is everybody gay in France? Because God commands it! Why does a Nouvelle-Vague minstrel do gangsta-rap with a bear? Because God wants it to!”

The Arthurian story and setting actually arose by an artistic decision. In the beginning, Clerfayt knew he wanted to make a 90s point-and-click adventure tribute. He didn’t know how to go about approaching the game visually and contemplated what he could best achieve without exerting all his energy into the art. Medieval manuscript art came to mind, specifically that of the Bayeaux Tapestry—a famous embroidered cloth which records the events leading up to the Norman Conquest of England. The reasons for this inspiration are numerous. Living with a father and sister who were medieval history enthusiasts was the first of these. Coming from a medieval Belgian town was another. But, most of all, Clerfayt knew that medieval manuscript style is easy to draw—you don’t need to worry about shadows or perspective. Hence he dove in through this art style and pulled the Arthurian myth out.

It’s a big undertaking, with Clerfayt being an almost one-man show in this enterprise. Coding, storywriting, puzzle design, graphics, animation, promotion, and PR, are all being done by him. The exception is the music, which has been composed by Brandon Fiechter. Fitting with the Monty Python approach to Arthurian legend, the soundtrack consists of traditional medieval English music filtered through chiptunes.

A Kickstarter campaign for Lancelot’s Hangover is currently underway. Find out about it here.