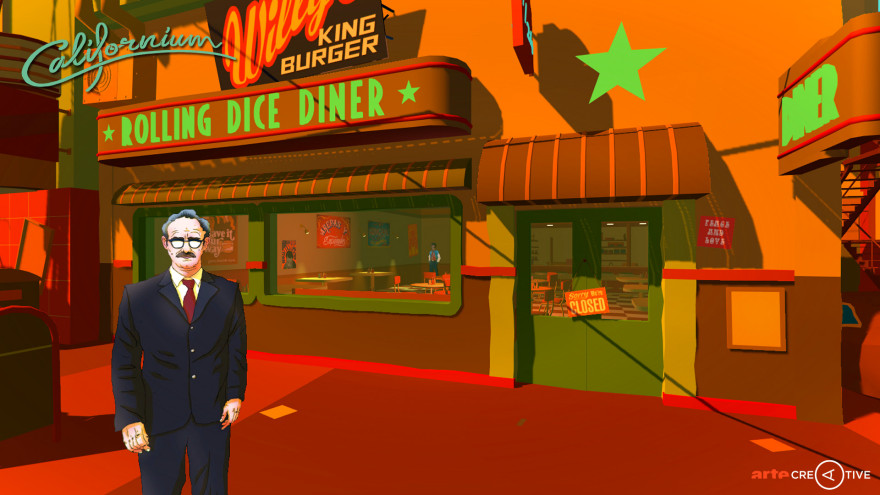 Philip K. Dick may be decades-dead but the extraordinary visions that lined the pages of his fictions are more alive than ever. There is perhaps no better proof of this than Californium—a videogame that weaves Dick’s influential stories with his own drug-fueled delusions into a multi-dimensional trip. It’s out today in full for PC over on Steam. It should also become available for free over on the ARTE Creative website, but only the first episode for now, with the following three to be released in order on March 1st, 8th, and the 15th.

surrendering itself entirely to his sci-fi notions

In Californium, you essentially play an alternate world version of Dick himself. Cast as one Elvin Green after his wife and daughter leaves him, you start alone but for the pills in your cabinet and the sprawled pages of unfinished novels on the floor. As grim as the circumstances may be, Californium‘s world is brought to life thick with the exaggerated colors of sunny Orange County and a population of 2D cartoon characters drawn with rich expression. Granted, these encounters with fellow residents are mostly miserable—an angry landlady, a disappointed editor, a government agent trying to take you down—but considered strictly visually, the whole thing pops and beams out of the screen at you.

As I’ve noted before, the reason for this vibrancy may be less to please you and more to reflect the cynicism of Dick himself, who saw California as a shiny plastic wonderland of commercial products and trash. He hated it there. It seems that Elvin Green isn’t a fan either, which is probably why he rolls with the momentum when televisions start talking to him, giving him instructions to travel to alternate realities. Each of these dimensions are given their own color palette (and correspond to a chapter of the game each) and leak into each other as you rip through space-time in your travels. It’s a complete realization of Dick’s belief in a multi-dimensional existence, surrendering itself entirely to his sci-fi notions; something fans should be thrilled about.

Californium was conceived as part of the celebrations surrounding the 30th anniversary of Dick’s back in 2012. As such, it’s part of a transmedia project that also includes a documentary called “The Worlds of Philip K. Dick” to debut on March 2nd, and a 360° virtual reality experience called I, Philip that will be available on February 22nd.

Find out more about Californium over on its website. Purchase it on Steam.