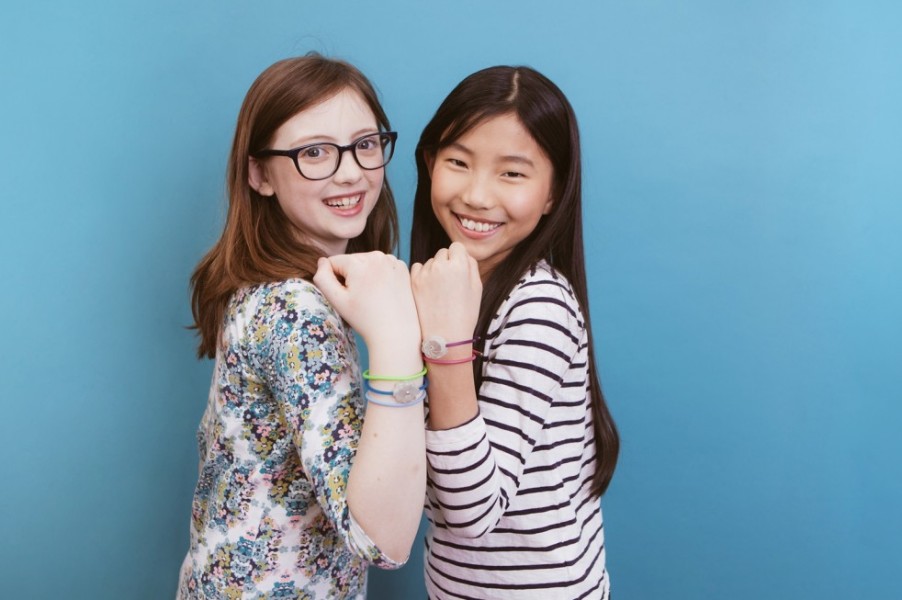 Taking friendship bracelets into the digital age, Jewelbots teaches young girls to tinker and code their way into the exploding world of wearable technology.

Whether it’s the Queen of Coding Grace Hopper or the new wave of women innovation engineers, fashion brand CEOs and musicians, young girls today have a growing number of role models who use science, technology, engineering and math (STEM) in their recipes for success.

Having more role models is critical, but according to the founders of Jewelbots—the so-called friendship bracelets for the iPhone era—the next generation of women leaders and inventors will chase STEM endeavors at an early age, like a game of tag.

These programmable wearables, which are powered by Arduino Gemma microcontrollers, teach girls how to hack hardware and code software so they can customize their own watches.

Hooking young girls with hands-on technology could lead them to careers that are underserved by women today. It might even inspire many to start their own STEM-related businesses, like Moreland and Jewelbots co-founder Sara Chipps.

Through Jewelbots, Moreland and Chipps hope to inspire girls to pursue any careers, whether that means programming new video games or studying computer science. Hacking digital bracelets helps girls unlock their own curiosity and potential for becoming leaders in technology and business.

Chipps is also a developer and co-founder of the non-profit Girl Develop It. She first noticed the importance of empowering young women while teaching them to write software at Flatiron School. Her female students were particularly excited, never realizing what they could do with software until someone took the time to show them.

“Diversity builds a better product and right now software is built by only one demographic,” Chipps said in an interview with AlleyWatch. “Tech is a super-high growth-rate field, and if women don’t focus on tech, they’re not going to be able to get jobs.”

Today, women make up almost half of the total workforce in the U.S. Yet just five years ago, women accounted for only 24 percent of people employed in STEM fields, according to the U.S. Department of Commerce’s Economics and Statistics Administration (ESA).


The ESA points to discrimination and gender stereotyping, a lack of flexible policies for working parents, and the lack of representation and role models for young girls as reasons why women are not as attracted to STEM-related careers.

But women are breaking stereotypes with awareness campaigns like #ILookLikeAnEngineer. They rock the maker movement, create biomimicry-infused garments and provide the tech power behind live music performances.

“Technology and engineering are part of our DNA and we believe a diverse engineering workforce is critical to driving continued innovation and growth in our industry,” said Danielle Brown, who heads up diversity and inclusion at Intel. The company’s $300 million commitment to building a diverse workplace, whose progress is outlined in the 2015 Diversity & Inclusion Report, is paving the way for women and underrepresented minorities.

WE WANT TO EMPOWER THE NEXT GENERATION OF WOMEN

Brown said the skills of a future workforce depend as much on curiosity, creation and design as technical aptitude. To encourage girls’ curiosity and interest in STEM, Brown said Intel will launch a series of activities in 2016 that will include college campus visits, design ideation camps and hackathons designed to connect these young women to role models and career opportunities in STEM.

“Right now, women make up a small percentage of these incredibly important roles,” she said. “We want women’s voices and ideas to be heard, and we want to empower the next generation of women with the skills they need to succeed in this field.”

With more examples like Jewelbots or Cuff and camps like Girls Make Games and Black Girls Code, young girls are getting more opportunities to develop their own technologies to change the world.