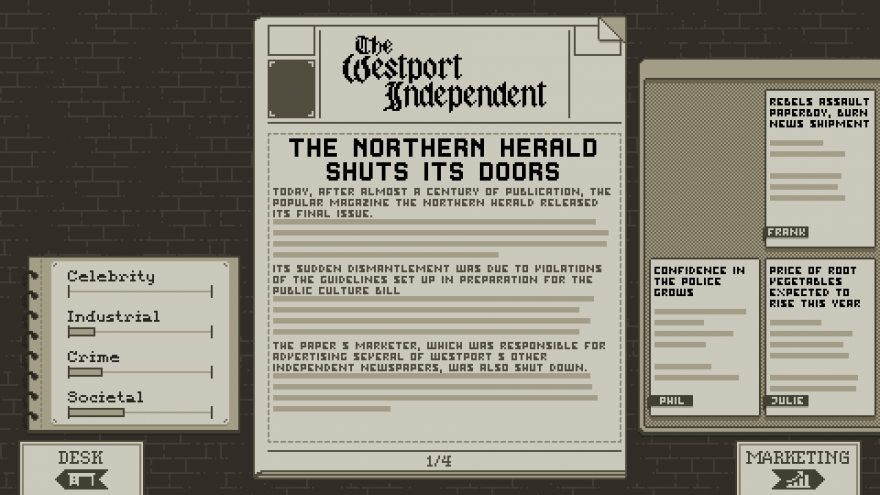 The Westport Independent is a game about journalism. And so, in the interests of good journalism, a full disclosure is in order: I was employed as an editor at a newspaper company in Hong Kong, the South China Morning Post Group, from 2012-2015. This is important because The Westport Independent is, specifically, a game about the self-censoring of journalism. And the South China Morning Post is a frequent target for accusations of self-censorship due to pressure from the Chinese Communist Party. I’ve seen self-censorship happen and I’ve seen it been falsely accused. Point is, I know it when I see it. And at the ironically named Westport Independent, I see a lot of it.

You are the editor-in-chief. You are 12 weeks away from the Soviet-esque regime shutting you down with its new, draconian media law. In this remaining time, you can turn your mouthpiece into a proletariat rabble-rouser, a shameless propaganda organ, or a trashy gossip rag. The other option is somewhere in-between all of these. It all unfolds at an editor’s desk stacked with a pile of articles that you need to copy edit and arrange into tomorrow’s edition. You have three basic levers to pull: you can toggle an article’s headline between the loyalist/rebel version; you can excise paragraphs from the text; and you can select the articles you want to run and the ones you want to spike. (You can also arrange the layout of the paper, but the impact of this, if there is one, is too opaque for my eyes.)

I know self-censorship when I see it

It’s in selecting articles where The Westport Independent rings the closest to reality, since in an actual self-censoring situation, headline choices are never binary—it’s usually more about obfuscating a controversial topic than it is in making an outright slant in the regime’s direction. In my experience, The South China Morning Post has taken the most flack in choosing to give pride of place to stories of dubious news value. This might be fawning profiles of pro-regime businessmen or publishing unquestioning reviews of Chinese President Xi Jinping’s speeches. You can do the exact same in The Westport Independent. Go ahead and slap a review of the president’s inspirational biography right there on the front page, and be rewarded with invitations to galas from the iron-fisted regime.

Aside from this highly-charged form of curation, the rest of the game’s take on self-censorship is just too blunt and binary to feel real—it is solely and completely rebel vs. loyalist. In fact, the scariest part about self-censorship is the  rarity of binary considerations;the slipperiness of the continuum. In my experience, self-censorship is an insidious process, and it often invades your psychology so slowly that you don’t even realize it’s happening to you. In fact, you may never realize it. Quite often, in a real situation at a paper that’s facing pressure from powerful overlords, a journalist might end up reinforcing the regime’s agenda while thinking they are paying dues to fairness and balance. There are glimmers of this psychology in The Westport Independent, such as when you find yourself choosing a headline because you think you’re including a winking subtext that rebels will understand as a dog whistle, but the regime will take at face value. However, there are too many moments where you do this only to end up surprised to find that you were given simple “loyalist” points for it between levels. The game is just not subtle enough to account for nuanced dissidence.

The aesthetic here is so similar to Lucas Pope’s Papers, Please (2013) that they may as well exist in a shared videogame universe. In both, the milieu is Soviet and the time period is 1940s. (You better believe newsreels open and close each play session.) But the comparisons to Papers, Please also lay bare the game’s other big flaw. Unlike Papers, Please, where you are making serious decisions right in the face of desperate and sympathetic people, The Westport Independent is a little too distant and removed from the individual to resonate on an emotional level. The game does deliver scenes between levels that color some of your writers’ inner lives, but they are too minor to establish much empathy for, say, a writer disappearing by the regime’s hand in the post-game wrap up.

A censored media is a crude and obvious instrument, but a self-censored media is something more odious. To be mired in it is to be engaged in a game of mental gymnastics to justify your actions. Somehow, dubious trade-offs start making sense: you might think it’s useful to cover a loyalist business leader in a flattering way, because it will help with access when his next controversy breaks. Soon enough, you end up taking non-existent orders from authorities that you think are watching but probably aren’t. You become filled with self-doubt. You second guess yourself. Even a good-hearted person can end up on the wrong the side of a repressive agenda, and yet still believe they are right. It’s too bad that The Westport Independent is far too blunt to carry this point home.