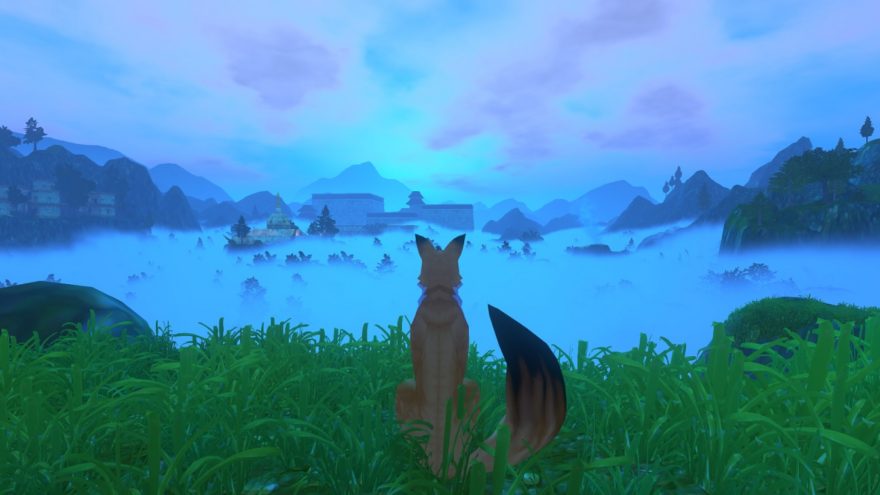 An elderly woman stands upon a tall cliff overlooking a foggy wilderness. The fog is so thick that only the tops of the tallest trees can pierce through it. There are also buildings, strange landmarks that dot the foggy valley below. They seem ancient and forgotten. This is where players will begin The Wild Eternal, standing on a cliff, looking out at a world that might just hold the key to ending the loop of rebirth.

The Wild Eternal is being developed by a small team, just three people in fact. Two of these people are brothers: Casey and Scott Goodrow. Scott handles all the programming while Casey handles the art and writing. The idea for The Wild Eternal came from the two brothers and their love of games like Everquest (1999), with big worlds that let players tell their own story.

“What does it mean to be lost in a game world?”

“We were particularly interested in the satisfaction and difficulty of building mental maps of spaces with limited information,” Scott explained in an email to me. “Such as if a part of the world weren’t accessible, or if two levels were stitched together in a seemingly impossible way.” This idea of a“hidden” part of the world led Scott and his brother to the high concept idea behind The Wild Eternal, which Scott described as: “An adventurer standing atop a vista, surveying the landmarks that poke above the fog, and then descending into a foggy valley filled with interesting obstacles to distract them from their path.”

The Wild Eternal tells the story of a 68-year-old woman named Ananta. Her life has been filled with hardships from living in the 15th century Himalayan foothills. And more recently in her life she has developed cataracts and arthritis. Ananta now fears the future, the next chapter of life. As Casey explains, “Her mindset at the onset of the game is: ‘My life was really terrible and I’m afraid that if I die now I’ll be reborn and have another really terrible life, so I want to escape that cycle of suffering.'” Ananta has a problem, but she has no knowledge of how to fix her problem. Casey and Scott describe Ananta as “extremely lost.” Which is one of the main themes in The Wild Eternal—being lost in different ways.

From the start, the Goodrow Brothers have been thinking about being lost and what that means to the player. “I think from the beginning we were trying to approach the game design with open minds,” Casey explained. “What does it mean to be lost in a game world? How can we allow the player to be lost but still have an engaging moment to moment experience?” To aid Ananta in her quest to end the cycle of life she seeks guidance from The Lord of Lost Dreams. The Lord is a talking fox who pops up from time to time to help both the player and Ananta. The fox is the key to reaching new areas and eventually reaching your end goal. Help the fox by collecting God’s Crystalline Tears from landmarks and in return the Lord of Lost Dreams will open doors and pathways for you.

While the narrative might sound somber, Casey and Scott hope players experience more that just sadness while playing The Wild Eternal. They’ve added things they hope will make the player laugh or even pique their curiosity. But Casey admits that, overall, The Wild Eternal is a very “chill experience.” Casey explained further: “We try to leave a lot of space for the player to just wander and be present in the game, listen to the music, think about what they’ve just done or learned, peer into the foggy distance at a critter, etc.”

Far off in the foggy distance is the key to what you are looking for. Maybe that next tall spire poking out from the top of the fog is where you need to go. There’s only one way to find out. It can be lonely out here in the fog. Thankfully, you have a fox to keep you company.