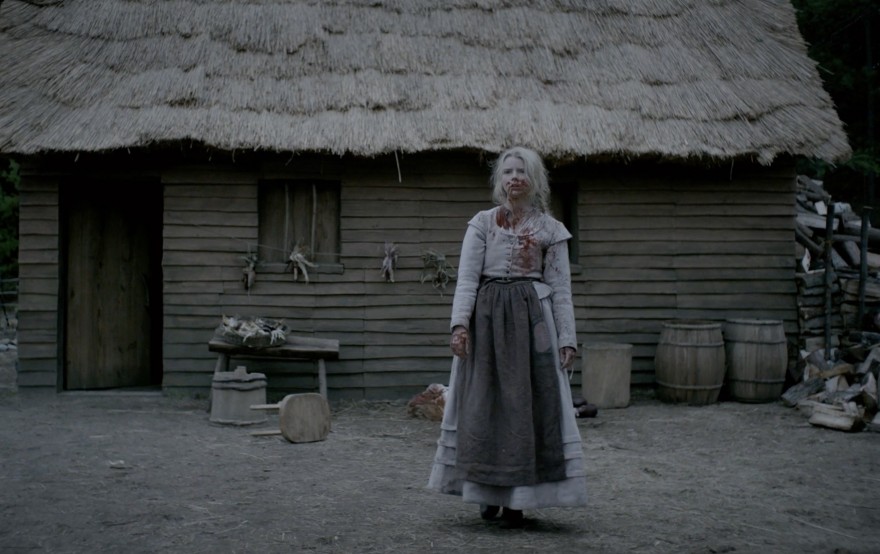 Before, I was not a witch.
But now I am one.

The Witch, described simply by its first time writer/director Robert Eggers as a “New England fairytale,” tells a story we’ve heard many times and in many different ways—but with one crucial difference. The ancient, devil-loving hag who wreaks havoc on good, devout Christians is, of course, a tale as old as most countries. More recently, though, it’s also been reapproriated to incorporate everything from Arthur Miller’s metaphorical scapegoats to the WB’s Halliwell sisters (and whatever the hell Strega Nona and her magic pasta pot are). But in a brilliant clash of world views, Eggers’ The Witch combines the sincere terror of the original witch’s tale with the echo chamber of modern hindsight. The witch in this case, neither metaphorical nor sympathetic, embodies an almost blameless evil: a fact of living on earth that’s as material as rain or food poisoning. By taking the Puritan nightmare at face value, The Witch puts the onus of meaning-making on the contemporary audience and asks us to make a conclusion about what lore like this means about who we were as people back when we believed in it. Who we are now.

Already, many label the coming-of-age journey of The Witch‘s female protagonist Thomasin as a feminist tale of empowerment. And indeed, Eggers’ story does appear to validate what your feminist history teacher has been saying all these years: fear of female power fueled the Salem witch trials. What killed all those women (and some men) was a patriarchal society that not only thought of women as the weaker gender but also saw their sexuality as literal dark magic. The Witch covers it all, setting Thomasin and her budding bosoms up for slaughter as the natural scapegoat for evil.

But something about the feminist interpretation of the film’s events feels amiss to me. So, when Eggers held a Q&A after a showing at the Brooklyn Academy of Music this past Saturday, I decided to ask him about it. Somehow, his answer only made the claims of empowerment even more intriguing.

How can Thomasin’s story be one of female empowerment

Before we got to mine in the final moment of the Q&A, however, a man to my left asked the question on everyone’s mind. Would the director and talented, fresh-faced actress Anya Taylor-Joy consider Thomasin’s final resting place in Satan’s blood-soaked embrace a “happy” ending? Taylor-Joy answered: yes, because it was the first choice she really got to make. Yes, because it meant empowerment. Yes, because society left her no other option: if she went back to the plantation, she’d face the same accusations; and she couldn’t very well run a farm on her own with nothing but her dead family’s corpses for fertilizer.

Already, red flags were firing. How can Thomasin’s story be one of female empowerment when, as the final scenes imply, she chooses Satan because she literally has no other choice? If the story had painted her ultimate destiny as a clear decision between the life she lived with her family and dancing naked in the woods around a flame, that would be one thing. But Thomasin is no Carrie (of the Stephen King novel), who, despite ending up worse off in many ways, at least chose to be up there of her own volition.

I found the answer to this discontinuity once Eggers answered my question about what it had been like to write a movie about the fear of female power as a man. I asked the question for no other reason than I was genuinely curious about the challenges and insights that experience might have come with. Men, of course, can and have and will continue to write fascinating stories about female empowerment in horror. But, unarguably, a difference between Brian de Palma’s film adaptation of Carrie (1976) and Kimberly Peirce’s Carrie (2013) exists, for example—and it’s to do with much more than Hollywood’s declining artistic integrity.

To his credit, however, Eggers answered a difficult question with potentially catastrophic backlash with a careful (if somewhat fumbling) kind of honesty. Like many who get asked a sticky question they don’t have a semblance of a script to during press events, he clammed up, at first mumbling some vague PR response about consulting many different types of people with many different perspectives (in, I hate to say it, a somewhat eerie echo of Mitt Romney’s “binders full of women.”) Then he gave the honest answer: an equally awkward declaration of his loving and important relationship to his mom. Finally, Eggers gave the interesting and truest answer: “I didn’t set out to make a feminist empowerment narrative. But I learned that writing a witch story is kind of one and the same.”

your best chance at salvation was to turn to pure evil

There it was. The Witch, rather than being a tale of empowerment, instead might better be understood as a straightforward case study of the puritan woman’s dilemma. Because if nothing else, The Witch reminds us that, to a group of women who truly believed that eternal hell and divinity were real, inevitable destinations, sometimes your best chance at salvation was to turn to pure evil. While all other arms—including those of the ones you loved—are pushing you into the flames, Satan’s open up and welcome you.

But, really, you didn’t even need to be accused of witchcraft in order to live an inherently lesser and more sinful life in the eyes of the Lord you were supposed to worship blindly. Because, in the Puritan version of Christianity, woman has no true place among God: her faith is inherently less powerful than a man’s. Even though Genesis I (the older version of the ultimate origin story) describes man and woman as being made at the same time and both in the image of God, Genesis II (the Puritan preferred chapter) twists it a little differently. In that version, man is created in the image of God, while Eve, created from Adam’s rib and thus made in his image, is basically a notch above animals in the Eden totem pole. Thus women, Puritan’s believed, were more susceptible to the devil because their souls and bodies were inherently weaker. Simply put, men have a direct line to God. Meanwhile, women’s calls get patched through to a man first, then finally to God if the man vouches for her—but also if she’s unlucky, she could accidentally get transferred to the Satan hotline.

Needless to say, being a woman in Puritan society was a shitty lot in life. No matter how hard you prayed or how much you dedicated yourself to God, you were always closer to the flames of hell than men. If nothing else, Eggers’s The Witch is beautiful because is sends that reality into sharp relief. Rather than tell the easier, more typical modern witch story about female empowerment, it tells the story of female anxiety and dread. It revels in the horrific trauma inherent to being a woman in 17th century America.