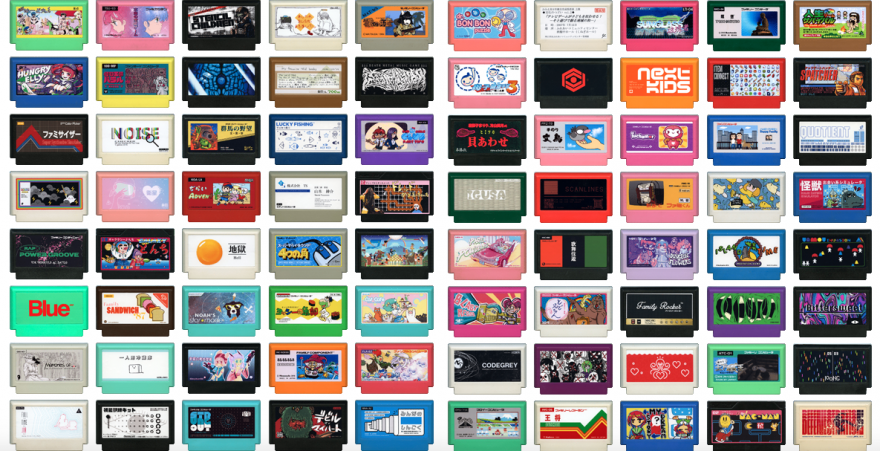 There’s a special brand of nostalgia for the Family Computer, colloquially called the Famicom. The game console was released by Nintendo in 1986 but never outside of Japan, and was home to many, many cult games. It jump-started a multitude of classic Nintendo franchises, like Mother (1989) (also known as Earthbound Beginnings, when it finally saw release outside of Japan in 2015) and Fire Emblem (1990). Among many other, actual gaming-related reasons, one particular way the Famicom was notable was in its unique multi-colored cartridges—an aspect the gray-plagued Nintendo Entertainment System (NES) was missing.

Buried in Tokyo’s Kichijoji neighborhood is a unique shop dedicated to all things Famicom (as well as chiptune music and 8-bit-inspired fashion). The owner of METEOR, the gaming subculture establishment, is Satoshi Sakagami. METEOR, is host not only to Sakagami’s own niche interests, but also serves as a venue of sorts. His annually hosted Fami-Mode is an all-night festival celebrating the greats of chiptune’s micro-scene in Japan, held at a cafe nearby the store. But perhaps Sakagami’s most well-known endeavor is the annual My Famicase Exhibition, hosted at METEOR and curated entirely by the one-man 8-bit fan himself, through the hundreds of artist submissions from all around the world.

The annual My Famicase Exhibition has been occurring for 12 years, each year growing greater and greater in popularity. In the unique exhibit, artists and designers from around the world (not just Japan!) submit their own designs and art for made-up games. Of all the submissions, Sakagami selects around 100 to showcase, and prints the chosen few onto cartridge shaped stickers, and voila: the dreamy faux-Famicom-game cartridges of My Famicase are born.

Graphic designer Walter Parenton has participated in the My Famicase Exhibition for two consecutive years. Last year, his faux-game submission Magical Sleepover Friends was based on a series of original characters, contrary to this year’s original “IP” he established for the meditative Island Time. “Island Time was inspired by my very first tattoo I just got a month ago, which I designed myself,” explained Parenton of his thematic “Meditation Game.” “I called it my permanent paradise. I really love those big-headed Easter Island Moai statues, and it brings me peace—like big anchors. Humble, happy and strong.”

Parenton’s blueprint for his faux-game extends beyond the Famicase-made cover art. He envisions that players would be able to sit on the Nintendo Power Pad, set a timer, and meditate in any of the game’s seven exotic locales. If it were on display, say at Fantastic Arcade (in the year “2020,” Parenton joked), Island Time would find a home on an old CRT TV, surrounded by a cool themed installation to create a nice, ambient experience.

New York-based comic artist Cassie Freire (writer and artist for Catnip Circle) has also participated in the My Famicase Exhibition for two years. In both instances, Freire’s featured characters from her very own comics, including her entry last year, Doki Doki Delivery, and this year’s Cat Cafe Dessert Panic! (starring the main teal-haired character of Catnip Circle, Pera). On her inspiration for the game, Freire says it was simple, “For a while I would joke about making a Catnip Circle game with friends,” said Freire. “Imagining what kind of game it would be, cutscenes, what the covers would look like, that kind of thing.”

“[My Famicase is] imagination and creativity in its most innocent form”

Cat Cafe Dessert Panic!’s premise is absurd, just as the comic it’s based on is. In it, the player is a human waitress in a cafe for cats, which sounds cute and cuddly, until the cats are hellbent on ruining Pera’s day and making her drop all the desserts. The goal of Freire’s game is not to let that happen, and keep the desserts intact.

Elsewhere, in Los Angeles, multi-year My Famicase Exhibition contributor Grace Voong (also known as Thymine) enjoys the welcoming atmosphere of the annual event, given that anyone can submit a design no matter “where you’re from, or who you are.” Thymine’s dabbled in her own faux-Game Boy carts in the past, and enjoys the tangibility of making a concept come to light through an “obsolete” component. For this year’s submission, the pastel-hued Oyasumi Tomodachi, Thymine took inspiration from a long-forgotten old sketch of a witch. “I’ve also always wanted to make something with a magical girl [or a] witch, and thought [this would] make a cute game,” explained Thymine of her concept. “By the end I decided the game was about friendship, and a little bittersweet, like how some relationships are. I wasn’t thinking about this at the time, but I feel the idea that ‘people come and go all the time’ was a subconscious inspiration.”

The My Famicase Exhibition is home to a variety of artists from around the world, and all their clever, varied ideas for games. Some are humorous, some are dark, some are just plain delightful. As Parenton himself said, “[My Famicase is] imagination and creativity in its most innocent form. No budgets, no revisions, no one can tell you ‘no.’ Just your idea and art to make it come to life.” Whether it’s the meditation of Island Time, the dessert juggling of Cat Cafe Dessert Panic!, or the ever-evaporating friendships of an adorable witch in Oyasumi Tomodachi, My Famicase, year after year, breathes life into the Famicom’s legacy, artists’ creativity, and the games that could and should have been.

You can view all of this year’s My Famicase Exhibition’s faux-games on METEOR’s site. If you’re in Japan, the exhibition will be on display at METEOR until May 31st.