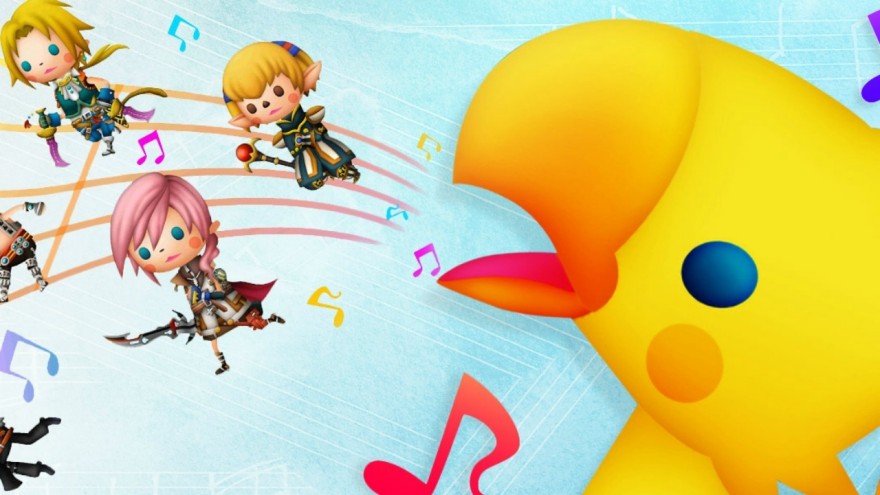 Two years ago, in a village overlooking a harbor…

I defeat the horde of students. My experience goes up, but not by much. Health is low. I pop into a town building looking to rest. The Dunkin’ Donuts coffee and chocolate chip muffin prove nourishing. I leave, ready to continue my quest. I soon realize my error: In my haste to leave I’d forgotten my spoils, a blue backpack holding, among other weapons of war, a Nintendo 3DS with the original Theatrhythm Final Fantasy in the game slot. I return to gather my things. They’re gone.

An opportunity to retrieve what was once lost.

Theatrhythm Final Fantasy: Curtain Call is less a sequel to the original game and more what the subtitle implies—a chance for that which worked before to stand in the spotlight and take a bow. This game is essentially the same as its precursor. This is no role-playing game but instead a music game. Each title in the Final Fantasy series is represented by its soundtrack. You still do meet gallant heroes, defeat wretched monsters, and embark on a journey toward annihilation or triumph. But you do so by listening to music from the history of the series and tapping, sliding, or holding the 3DS bottom touch-screen in rhythm with the top-screen’s visual cues. By featuring Square Enix’s long-running franchise, Theatrhythm potentially sports the finest collection of music in gaming history. Curtain Call is a second chance to hear and engage with these songs in a new way. Some might call it an opportunity to retrieve what was once lost.

My bag has been taken. My 3DS, filled with two years and hundreds of dollars worth of games, is inside it. Since the coffee shop is on campus, I go to the college’s police office and report the backpack missing. We are in the middle of downtown Boston. Forests to the north. Oceans to the east. Caves to the south. A gleaming tower rises above the horizon to the west. My loot might be anywhere by now. I fear it gone forever. I take quick, long strides, knowing I have to move quickly if I am ever to see my 3DS again.

Theatrhythm consists of several different modes. The kind of rhythm game you play depends on the style of music. Battle themes are presented as contests of might; choose four heroes from across the series’ history, each represented as chibi-cartoon versions of their pixelated or polygonal selves. These four face off against a rogue’s gallery of monsters. The battle music plays. Soon, notes scroll along one of four rows; tap or swipe in time with the music and each appropriate hero lands a vicious blow. Listen and play well to defeat your adversaries. Miss too many notes and they strike first, depleting your health.

The same charms and spells and weapons are here as in the RPG originals, but all elements—the quest, the fights, the exploration, the discovery—have been stripped down into rhythmic strokes of your stylus or button-taps. Each title has ten or so songs. Each song is a few minutes long. Play through each song in order, from the title screen opening to the final resolution, and a forty hour experience is distilled into forty minutes. Theatrhythm is the perfect game for adult Final Fantasy fans who spent summers slogging through these deceptively named adventures as kids, but now have minutes, not seasons, to spare.

My time is running out. I left my bag behind for an hour before returning to the scene. Who knows how long it has been in another’s clutches? I near my destination: two adjacent stores where one might take a game system and pawn it for gems. I enter the first and ask if they’ve seen a red 3DS XL. The storekeeper looks at his associate and looks back at me. “He was here five minutes ago.” They did not buy it from him, fearing it acquired through the dark arts. The man urges me onward. “He must be close.”

Field music levels play differently. Instead of four heroes, you follow only one. He or she ambles along a path passing familiar scenery along the way to some unnamed destination. Single notes scroll toward you, their movement arcing along a curving path. The challenge is to keep up not only with the rhythm but the pace and range of the tune’s unspooling melody.

Event music abandons your chibi heroes entirely, instead showing the chosen title’s gameplay or a prerecorded cutscene while song notes inscribe a swirling pattern on top of the action, merging song, past footage, and present inputs. These Event songs are often melancholy or somber, while Field music has a more pensive feel, the memories of a trip once taken. Battle music tends to be upbeat and aggressive, full of half-notes, changing time signatures and major chords shattered into arpeggio. The sound of swords clashing turns into guitar solos. The impact of steel on flesh registers as bass and drums. Battle themes call to mind victory’s surging adrenaline or the emotional chaos that follows crushing defeat.

I step into the second store, its name a fitting one for a place where old games go to die. But like Final Fantasy 2, this store is a paradox: these old leftover games, dead to their owners, are given new life here. For a price. Used systems grant the seller even more coin. Merchants travel long distances to exchange goods for future purchases. One such traveler stands in front of me, speaking to a young Asian man behind the counter. Slung across the traveler’s shoulder is a blue backpack. My backpack.

In the distance, I hear the soft rumble of drums.

One new mode in Curtain Call is the Quest Medley. Instead of single songs played for experience or new spells, you take a forking path where a pre-set sequence of songs await. These vary from short fifteen minute bursts to longer, more challenging roads, up to a full hour of music. You must clear every song along the way in order to retain the treasure gathered. And at the end of each Quest Medley lies a final test of valor: A boss fight.

Another mode unlocked during the course of play is a Versus battle. The original Theatrhythm only compared scores of your efforts against those you StreetPassed with. Now you can challenge opponents, local or online, in a kind of parallel duel. You each play your own round, slinging spells at the same monsters, but as you do you build up energy towards unleashing special powers. One of nine effects will disperse randomly; these alter the  field on your opponent’s end in some way, such as changing the speed of their note lanes, or leaving the kind of note a mystery until the last moment.

The man with my backpack on his shoulder leaves the store, my 3DS still in his hand. I jump to the counter. “That was mine,” I tell them. “I left my bag behind and he picked it up,” I explain. The young Asian tells me he didn’t buy the system because in the game slot was a Final Fantasy game, and the man didn’t seem like the type to play Final Fantasy. They call the cops.

In the meantime, I go outside. The man is nowhere to be found, but he has given my 3DS to a friend. I ask her, “Are you trying to sell that?” She says yes. I say, “I can try and sell it for you.” Her eyes light up. “Try to get eighty for it,” she says, and she hands over my system to me.

The most elaborate change in Curtain Call is also its simplest. The original allowed only the touch-screen to input your taps and swipes. Now you can choose either stylus or face buttons, or a combination. Holding the system with two hands and tapping a button with your right thumb while pushing the circle pad with your left is definitely more stable than the awkward balancing act necessary to hold and use a stylus. But I prefer the physical action of the latter. In a game that already strips so much of the experience from a long adventure, even the smallest nod to slashing a sword and casting a spell goes a long way toward making it feel like Final Fantasy.

I re-enter the first store and walk directly to the counter. I show the associate who helped me earlier my red 3DS XL. “They gave it to me,” I say. “They think I’m trying to sell it for them.” Holy shit, he says.

I explain how the other store’s employees are calling the cops. The associate tells me to hang out in the back of the store behind a second counter until the authorities show up. I do. Once the cops arrive, they bring the man with my backpack into the store. He says I should have just told him it was mine, that I didn’t have to get the cops involved. Maybe I should have. I take my belongings. Only later do I notice that my Theatrhythm game card is no longer in the system. They’d removed it so as not to tip off skeptical store clerks. The game now likely sits unplayed in some forgotten pocket. Sometimes, the title fits.

Theatrhythm Final Fantasy: Curtain Call includes many more songs than the first game, from many more titles in the franchise such as Final Fantasy Mystic Quest, Final Fantasy Tactics, and Lightning Returns. Many of these songs were available to owners of the original to purchase as downloadable content. Curtain Call includes them up front. Owners of the first game might be chagrined to find out they could have waited two years to get all the content on one game card for a single price. But newcomers to this musical take on a venerable series will be pleased to get what they should have always had in the first place.