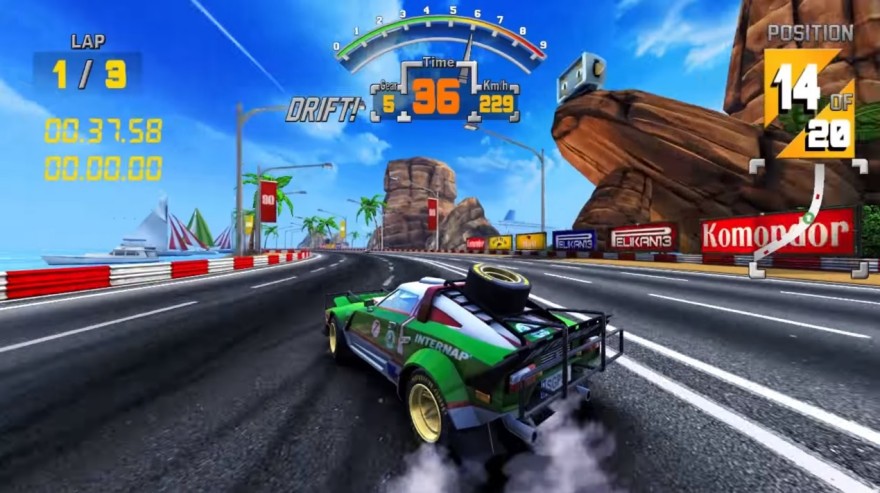 I spent the first 11 years of my life reading used car listings and saving up for my first set of wheels. I spent the next four months of my life burning all of these car savings on arcade racers, a relationship that burned so bright and fast that I have never since felt the urge to learn how to drive or buy a car.

Put otherwise: The 90’s Arcade Racer speaks to the part of my heart that will forever belong in the entrance hall-cum-arcade of Montreal’s Quilles G Plus (aka: RoseBowl). As the name implies, the game, which just released a new round of images, is a collection of ‘90s car games tics: unnervingly peppy music, decals as far as the eye can see, checkpoints that make Damien Hirst look like a master of subtlety, and a collection of cars and tracks that don’t really go together. And sure, this is a long way of saying it’s all nonsense. But that, in turn, is just another way of saying that ‘90s arcade racers—and, hopefully, The 90’s Arcade Racer—are fun.

Car buffs, for all their shared interests, cannot agree on a definition of fun. One of the many dead horses Top Gear famously flogged was the stereotype of the car buff ranting ad nauseam about technical specifications. This was an unfair strawman, as almost everything in the world of Top Gear was, but it was not without hints of truth. Car culture is sufficiently broad to accommodate the wonks and the less studious, but car games have rarely achieved a similar balance. The arcade racers of the 1990s were decidedly unconcerned with reality. They had plenty of technical details, but those details existed within a fantastical universe. The pendulum swung the opposite way in later generations of car games, like the Need For Speed franchise, which were not wholly real but wore their accuracy as a badge of honour. “We went through all the technical specifications to make this absurd title,” the games seemed to scream, as if that would excuse the reset button. And games like Need For Speed were still fun, but they were also joyless.

I haven’t driven since those days

That distinction haunts the car game. If you enjoy being behind the wheel, any car game can be fun. (This, admittedly, is a hypothesis developers are all too eager to test.) But that sort of fun is different from pure joy. In a truly joyous car game, pleasures are associated with the act of driving but detached from its purely mechanical elements. This might be why Rocket League, a car game that has virtually nothing to do with how cars actually work, has been such a success. It is so vibrantly stupid that you can’t help but forget about pistons and gear ratios. These are the conditions in which a joyous car game thrives. Any car game can achieve this, but it’s much harder to get there when a game wants you to care deeply about shock absorbers.

I cannot promise you that The 90’s Arcade Racer will fulfill any of this promise. I cannot promise you that any game will, to be quite honest. But I can’t help but be hopeful that a game reminiscent of the RoseBowl (but, crucially, without the smell of steamed hot dogs) will be the one that does that trick. I haven’t driven since those days, but in the right environment I’d sure do it again.

Find out more about The ’90s Arcade Racer on its Kickstarter page.