For fans of pro wrestling, one of the most satisfying things in any match is good in-ring psychology. No, not psychology of the Freudian variety. I’m talking the way in which a match unfolds—the storytelling behind a match. It’s an insider term that might differ from one extreme wrestling fan to the next, but the common element that most fans and wrestlers would likely agree on is that wrestling psychology refers to an individual performer’s ability to use his or her wrestling repertoire to effectively tell a good story within the ring.

Ring psychology is a unique skill that not all wrestlers readily possess, and it can vary from being able to work with the live crowd and collaboratively with their opponent to making decisions that are logical and sensible for their characters either ahead of time or in the moment. Coupled with the ongoing written story behind the performers’ rivalry, it can elevate a match between two wrestlers from good to great.

Take for example a recent standout WWE match, which saw the company’s poster boy, John Cena, compete against a new wrestler within the organization: the merciless veteran Kevin Owens.

Leading up to the match, the story being told was that the cocky Owens—a fifteen-year wrestling veteran who was only now receiving his big break after signing exclusively with WWE—wanted to further his career by taking out the biggest name in pro wrestling today. Owens wanted to put Cena in his place by effectively beating him in his first major match in the WWE, and the result was outstanding to behold.

Owens wanted to put Cena in his place

Neither man showed signs of backing down. From Owens continually goading Cena and using his own moves against him, the several heart-stopping near-finishes as a result of some unpredictable high-impact maneuvers, to the “selling” from both men (i.e., looking like they’re in pain), the psychology in the match was crisp and managed to tell a very clear story. Owens proved Cena wrong by effectively beating him cleanly and showed to the world that he was a man of his word after declaring that he was going to finish the fight he started by wrestling circles around Cena.

All of these nuances made that particular bout all the more exciting, and, as a wrestling fan, that’s something that goes a long way in defining some of the most memorable matches of all time. Yet it’s also the very thing that can’t be emulated quite properly in many professional wrestling simulators.

WWE’s wrestling simulators in particular promise players an authentic grappling experience, and while the series has made some admirable strides in trying to achieve a level of authenticity—for example, opening up a match with a bit of chain wrestling before progressing from simple holds to big power moves and comebacks—the pacing of every match played feels clumsy to say the least. They don’t provide feedback for players wishing to include all the necessary subtleties that add up to building an engaging narrative from within a match.

And there’s a good reason for that.

Given that most professional wrestling matches are planned in advance to varying degrees and the result pre-determined (surprise!), it’s almost impossible for players to be able to achieve their own five-star classics when they’re going into a match knowing that they can’t work effectively with a computer-controlled opponent that’s already programmed to try to win. Even if players had a friend with them and they planned precisely what was going to happen, explained clearly to each other why certain things were happening and who was going to win, there would still be no audience to communicate these ideas across and no indication as to whether or not players’ ideas were clicking with a crowd.

This is the dilemma that modern professional wrestling games face when it comes to being able to portray sound psychology and teach its players what effective ring-work looks like. However, this perhaps is reflective of an even larger and current problem in the world of professional wrestling: is it sport or is it entertainment?

In recent years, WWE has opted to distance itself from the term “professional wrestling,” instead referring to what they do as “sports entertainment” and their wrestlers as “superstars.” This has caused great frustration both within the vocal wrestling fanbase as well as the actual wrestlers themselves. But WWE aren’t technically wrong in these semantic shifts.

Professional wrestling isn’t about showing who the stronger competitor is. Fundamentally speaking, it’s about putting on a good show for an audience through a wrestler’s specific skill set—keeping in mind that pro wrestling in its infancy was exhibited in circuses for the purposes of entertaining audiences with larger-than-life characters (not so different from today!). Psychology ties strongly into a wrestler’s ability to project how well they can document drama, put on a spectacle for the audience and develop a character within the ring.

And as a pure sports simulator it doesn’t quite work out to that effect, as evidenced particularly by WWE’s line of games, which dominate the market. What makes other sports simulators work is that, like the actual sport they are based on, results aren’t pre-determined in order to progress stories or characters, and the major moments within a match—the ones that get an audience really fired up—aren’t planned in advance in order to get spectators to react the way they want.

In reality, soccer players aren’t worried about how the crowd will react to them mid-game and don’t need to pander to them or feed off their energy in order to better influence their performance. The FIFA series wouldn’t need to worry about implementing a system that reelected this idea of audience engagement because it’s not important to the core of the sport. Similarly, the NBA 2K series wouldn’t need a new alignment system to show how much of a “heel” LeBron James’ became after he left Cleveland to play for Miami because it’s not fundamental to the sport of basketball.

wrestlers must make the audience feel involved in the match

Wrestlers, on the other hand, absolutely need to engage with the audience, because it feeds into their characters and into their overall psychologies. By establishing a connection between performer and spectator, it allows a wrestler to interact with his or her audience in a variety of different and interesting ways. Ultimately, this means making the audience feel as though it is every bit as involved in the match as the wrestlers are and that the audience is directly influencing the quality of the match.

One of the only wrestling games to have tried to achieve this basic level of wrestling psychology is Fire Pro Wrestling. A long-running series that originated in Japan, the Game Boy Advance version of the game is particularly unique in that has a special “Audience Mode” which offers several different strategies on how to win a crowd over. If you want to win the audience’s approval through the high-flying acrobatics of the Mexican lucha libre style of wrestling, the crowd will want to see that reflected in the match. If you want to learn how to put on a wrestling clinic by putting on a big show, the mode allows you to choose that option, too.

With all these choices in mind, the GBA title allows its players to choose how they want to tell the story in the ring. But perhaps most importantly is that in telling an exciting wrestling story, it doesn’t necessarily mean having to win a match in order to gain audience approval. Depending on how the match plays out and how it ends, it is still possible to achieve a high audience approval rating in Fire Pro Wrestling. Now, players have a more defined goal where entertainment value is coveted over one’s win/loss record—something that feels more truly accurate of pro-wrestling.

Before bell time, players are given advice on how they can better entertain the crowd, and with Fire Pro Wrestling’s lack of a traditional health bar or stamina bar, players are also encouraged to experiment and learn what is engaging to the audience and what’s not. It is during gameplay that one can learn how to better read their opponents, understand what moves need to be performed in order to telegraph a good match and also to consider the length of a match and how that can sometimes determine the strategy one has to adopt in telling a compelling story in the ring.

Meanwhile, a game like Legends of Wrestling on the Playstation 2, which also has a match satisfaction score determined by the audience in its campaign story mode, fails to teach players the basics of wrestling psychology. Despite prompts that appear informing players that they’ve successfully performed more than one move and that they’re capable of drawing blood from their opponents, Legends of Wrestling’s loose achievements hardly provide insight into how players can get better at being generals of the squared circle. They don’t necessarily provide players with a good understanding of why these aspects are important within the story that they’re trying to create themselves.

With all the advancements that professional wrestling games have made, it’s surprising that a Game Boy Advance title from several generations ago still manages to more accurately portray the art of wrestling than the litany of modern wrestling titles that are available today. WWE 2K15, the most recently released WWE-owned video game, featured a new Rivalry Mode which explores some of the WWE’s most amazing feuds in recent memory. One of these rivalries centered on the outspoken CM Punk and John Cena and featured their now-classic battle at the Money in the Bank show in 2011. Dave Meltzer, one of the most respected journalists to write about pro wrestling, awarded that match a full five stars (the WWE, to date has only has five matches that have met this criteria, and this was the first to receive the distinction since 1997). The storytelling and psychology executed in the match were nothing short of magic, with CM Punk’s Chicago home crowd adding to the big fight atmosphere of the evening. But in WWE 2K15, you’re just prompted to damage Cena long enough until you hit your finisher and win. 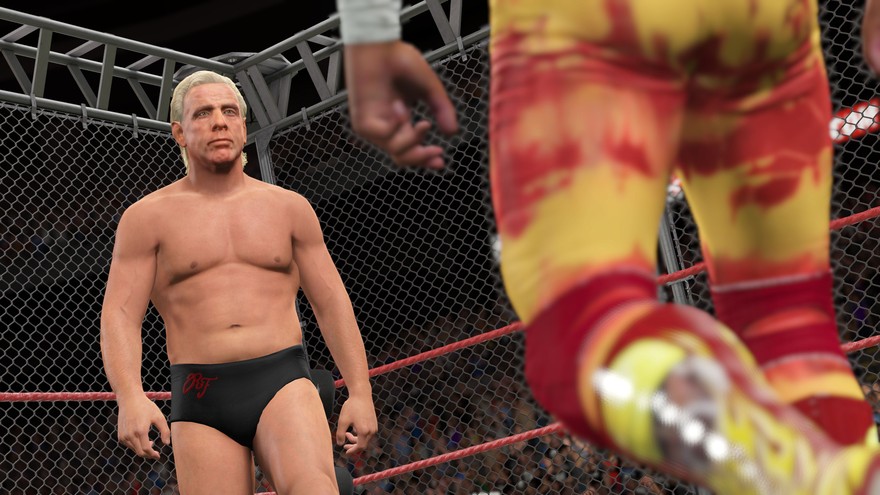 When we talk wanting to get more out of wrestling psychology in games, we talk about wanting to better understand what makes for five-star matches—to get inside the heads of some of our favorite wrestlers and learn more about the basic nuances that help make for great in-ring storytelling. We want the perfect match, we want the respect of the crowd, and we want to become own storytellers in our own right.