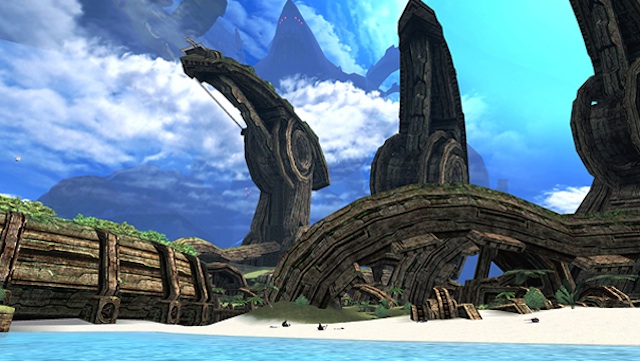 In April of this year, Nintendo brought the hotly anticipated Xenoblade Chronicles to North American shores. The chatter coming out of Europe and Asia was that Xenoblade, as it is known in its native Japan, might be the Japanese role-playing game of the generation. Reviews from across the pond suggested that it was what fans of the genre had been pining for. They said it obliterated the notion that story-oriented, single-player, role-playing games with no shooting mechanics were boring relics left over from the last century. They said that it was going to change things. They were wrong. In getting here, Xenoblade didn’t part the Pacific Ocean, like Moses crossing the Red Sea. Rather it washed up in the tide like a beached whale.

There are few scenes in nature as sad and darkly ironic as that of the beached whale. Here is this majestic animal, the most supreme mammal, the largest of all living creatures, that has been immortalized in the Bible and the prose of Herman Melville, and valiantly campaigned for by Greenpeace, rendered completely helpless by an element that isn’t even a force of nature, but just land––an immobile, unimposing, and not-at-all dangerous state of the earth. In similar fashion, Xenoblade has puzzlingly been stranded in the constructs of empty virtual space.

Scientists don’t know what causes whales to get stranded. However, we have a pretty clear picture of how Xenoblade ran aground. The history goes like this: Japanese arm of Nintendo purchases well-regarded Japanese role-playing studio; studio makes a gorgeous role-playing game; North American arm of Nintendo shows no interest in publishing it, despite the game line-up for Wii being paper-thin; entitled gamers on the IGN forums get angry and start an online petition called Operation Rainfall; Nintendo acquiesces, bringing a limited number of copies to the States, only selling them at Nintendo’s online store and at GameStop; people recognize the game is over-hyped and not fun, but everybody pretends to like it––the way you do when you get a shirt at Christmas that you would never wear––because they want Nintendo to localize more titles.

There is a Quest System that encourages you to kill animals, but offers no motivation, aside from being part of the system.

Besides its migration, Xenoblade shares some key characteristics with whales. It’s majestic, and it is also big. If there was ever a game that captured the expansive plains and overhanging mountains and cascading waterfalls and starry clearings of New Zealand, this is it. Like the underground rivers flowing through its cathedral-esque caves, the bigness runs beneath the scenic panoramas into the core of the game, where it manifests in needless complexity, and where the game becomes trapped under its on weight.

After I got through the first 10 hours, which serve the purpose of an extended tutorial, generally instructing you on how to navigate menus, I actively avoided Xenoblade for a week. It is big in all the wrong ways. This 80-hour time sink hails from the small, overcrowded country of Japan. In creating a game meant to appeal to Western audiences, developer Monolith Soft has made a game that is out of its element. Kotaku complained that Xenoblade is “basically a single-player MMO,” and it’s true that it could stand for 100 or so men pulling at it with ropes to get it to move.

Whales aren’t the only talking point. Xenoblade’s own story, told in frequent cut scenes that are best immediately skipped, is a perfect allegory for the game’s troubles. Here is a civilization at war with machines, where menacing robots with retractable saw-blades terrorize the countryside. These goons are portrayed as heartless antagonists, hell-bent on doing evil, like a lead villain in a Disney animated film (which I mention because an enemy’s dubbed voice sounds hilariously like Captain Hook from Peter Pan—or is it Mr. Snead?). They are the offspring of a giant machine god, who battled a giant nature god at the beginning of time, until their bodies locked into place, like car engines without motor oil, at which point the world sprang forth from their bodies.

You play as a team of ambitious teenagers that has a legendary sword that may be the key to reconciling the machines with the natural world. Likewise, you are in a personal battle with machines, fending off the codices of data that stream from your Wii console onto the screen. You are equipped with a Classic Controller Pro, a fine controller that plugs into the tail end of a Wiimote, bridging the gap between Nintendo’s ideal of intuitive play and the industry standard for precision. It makes slicing through robots a breeze. However, even it is poorly equipped to tackle the most menacing machine of all, Xenoblade’s menus.

The menus are a system of systems, with other systems nestled within, accessed with a controller that doesn’t quite fit into the system. There is a Quest System that encourages you to kill animals, but offers no motivation, aside from being part of the system. There is a Forging System where you can craft gems that are part of a Gem System that modifies the Equipment System. There is a Skill System, and a Skill Link System, which influence the Arts System, which ties into the Experience System. Yet the system never stops to think of why you’d want to dick around with all these systems, as is the nature of systems, nor asks what is at the other end of the system.

Would euthanizing my virtual schnauzer feel this nonchalant?

The system you will spend the most time with, though, is the battle system, which is visually exciting, but otherwise excessively dull. Your sword lights up with a florescent glow, resembling a lightsaber. (Again, I point this out because of the laughably bad voice acting, as the battle cries sound like Ewan McGregor doing Obi-Wan Kenobi in the Star Wars prequels.) Four-digit numbers appear over your foes after you strike them, emphasizing that you dida lot of damage. And victory is largely determined by your number, that is, your character’s level, as opposed to any type of strategy. What’s more, battles are too far apart, go on for too long, and require too many button presses for how simple they are.

These poorly planned encounters are the one place where Xenoblade’s overweight baggage connects to its naturalistic world of open vistas and mythical creatures, which its artists have designed. That’s right. The only way to engage with Xenoblade’s grandeur is by sticking a sword in the side of its dinosaurs and humongous turtles and grazing mammals. The wildlife looks like it belongs on an endangered species list, but, taking a cue from Monster Hunter, the list you are given is of things to kill.

These bounties contain a hint of the visceral satisfaction that Ernest Hemingway wrote of in Green Hills of Africa and The Sun Also Rises. But as a guy who has never hunted, despite growing up in a place where shooting your first deer is synonymous with becoming a man, I’m uneasy with this, especially coming from the company who published Nintendogs. Would euthanizing my virtual schnauzer feel this nonchalant? I’m not supposed to think about it. My character is rewarded with experience points, a dodo feather, achievement points, and 2,000 dollars of in-game currency––all of which direct me back into the overarching system, which is like the remaining bones of a decayed whale.