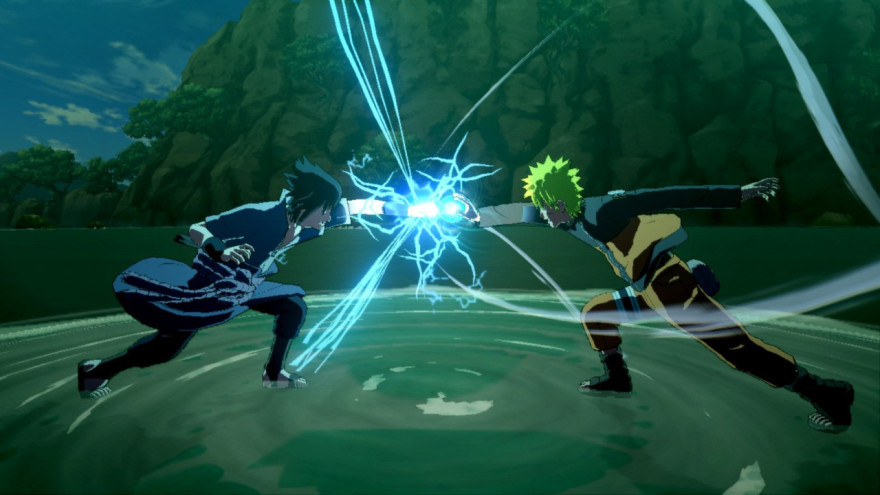 Typically, I tend to think that there’s value in approaching massively popular things with the eyes of an outsider. Naruto Shippuden: Ultimate Ninja Storm 3 Full Burst, though, is not really one of those situations.

Having neither watched an episode of Naruto nor read an issue of the manga, I originally intended to come at this review with an answer to the question of, “What, exactly, is Naruto?” Unfortunately, using Full Burst as a starting point makes it kind of impossible to answer this. In fact, this whole thing might be easier if we discuss what Full Burst is not, and that conversation begins with the moment the installation screen shows up as the game is joined to a console’s hard drive.

You’re irretrievably lost by the time the title screen shows up.

But, just to back up a little more: Full Burst is technically a repackaged edition of a game called Ninja Storm 3 with all of that game’s downloadable content included. More importantly, the game picks up where the story of Ninja Storm 2 left off. More importantly than that, even, is that if you don’t have a deep understanding of series lore already, the installation screen is more than enough to make you feel in over your head. Minute after minute, it bombards you with text featuring Naruto history, characters, proper nouns, titles, jinchurikis, chakras, clans and more. You’re irretrievably lost by the time the title screen shows up, and you just keep wandering further into the darkened woods from there.

The action is similarly baffling at first, tossing you into the midst of a heated battle with no hint at how to play. Being lost in an intricate web of plot is tough, but the gameplay, too? Online play offers up a mind-boggling 80 playable characters to tinker with, though this is ultimately a concession to leaving no stone unturned rather than a way to create meaningfully varied styles of play.

The connection here to a player’s character isn’t based on movement or depth, especially since most of the fighters play so similarly that unlocking new ones every half hour barely even registers as you work your way through the story. The strategies remain the same, so even which fighter you prefer tends to be based on a link to the franchise instead of anything else. Experimentation eventually yields competence in the arena, and later loading screens begin to note specific mechanics, but until then I wonder if this feeling of sheer confusion is what it’s like for people who rarely, if ever, pick up a videogame controller.

Then I think: At what point is it unfair to ask for games to be accessible to everyone?  Isn’t it okay for some to be aimed directly at a narrow segment? Titles with niche appeal are released all the time–the Disgaea and Virtua Fighter series both come to mind–flush with mechanics and systems that would be daunting for any newcomer to learn. It’s just strange for me to see one that revolves so much around plot. Other franchises may traffic in similar themes or nod to well-versed players, but they’re otherwise accessible to people who’ve never dabbled in the series—recent Zelda titles, in fact, act a little too much like they are beyond the comprehension of the average person.

Still, Full Burst doesn’t seem quite like a gold mine for fans, either. The extreme emphasis on retelling the series’ story—cutscenes are frequent and sometimes as long as standalone episodes—can’t sit well with those who’ve likely just watched everything happen in the anime. These can be skipped, but considering the vast majority of the solo campaign is spent watching them set up the next confrontation, chances are they’re intended to be savored.

At what point is it unfair to ask for games to be accessible to everyone?

Perhaps Full Burst is a sort of big transmedia experience; the game is, after all, by the creators of Asura’s Wrath, which also played with a TV-style format, interactive cutscenes, and various styles of gameplay. Major conflicts are interspersed with quick-time events and battle-interrupting cinemas, but the game lacks Asura’s manic energy and pacing. There are instances where the spectacle is exhilarating regardless of one’s prior knowledge, but they are few and far between.

Asura’s Wrath didn’t make much sense, either, but its nonsense stemmed from a desire to look at gaming from a different perspective. Inspired by anime but not actually meant to be one, it was motivated by the possibility of fusing together disparate parts to create a new yet cohesive experience. There are hints of that in Full Burst, but ultimately it feels too much like it’s lost within the trees of its own forest. At some point, all the explosions, chakra charges and transformations just started to glaze past my eyes, making me feel like I was constantly in the same place: Nowhere.