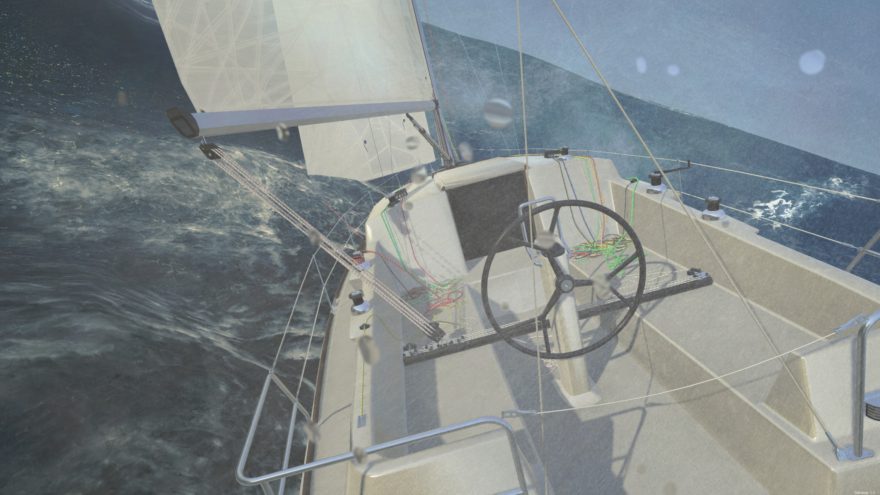 The thrill of traveling the ocean has captured our attention for millennia, across cultures and continents. From the westward journeys toward a new world to the harrowing quests of circling the globe or reaching the poles, sailing these vast blue expanses has long been tied to adventure and discovery. Perhaps it’s that intrinsic link that makes the sailing in The Legend of Zelda: Wind Waker (2003), Salt (2014), Assassin’s Creed Black Flag (2013), and other games feel so satisfying and exciting, letting the layperson experience the freedom of the open ocean.

The upcoming Sailaway hopes to capture that freedom in its totality. Its ambition can’t be understated; the vision of creator Richard Knol is one of realistically-scaled oceans rocked by storms and weather influenced by real-world and real-time weather conditions. It’s also one of a simulated sailboat where the player must manage and control every major part of the vessel from trim line to outhaul. And one of sailing upon a sea where shallows and shores and currents and waves must all be considered and navigated. It’s a game about sailing, not merely a game with sailing.

a storm in reality will result in a digital storm

Sailaway promises a scale where sailing across the Atlantic or Pacific will take hours and weeks, your ship continuing its journey even when you’re offline; navigating by nautical maps, you’ll be able to study the currents, depths, and most importantly the weather. Interestingly, Sailaway‘s weather is abstracted from NOAA data, so a storm in reality will result in a digital storm, and vice versa with high pressure areas and periods of calm.

Navigating both the calm and rough waters will require an understanding of your sailboat, learned through interactive tutorials and automated aids, or personal experience if you’ve sailed before. Sailaway represents all the major aspects of the boat, tasking you to “raise sails, pull the winches, set reefs, adjust the sheets, outhaul, downhaul, traveler, vang, backstay,” and other actions necessary to adjusting to the winds and currents. You’ll even be able to manage those parts away from a computer; Sailaway will be cross-platform, so course and sailtrim can be adjusted from the comfort of a tablet.

Sailaway is expected to release on PC, Mac, and Linux in November. For in-depth details on the sailboat controls and other mechanics, you can check out the game’s site.