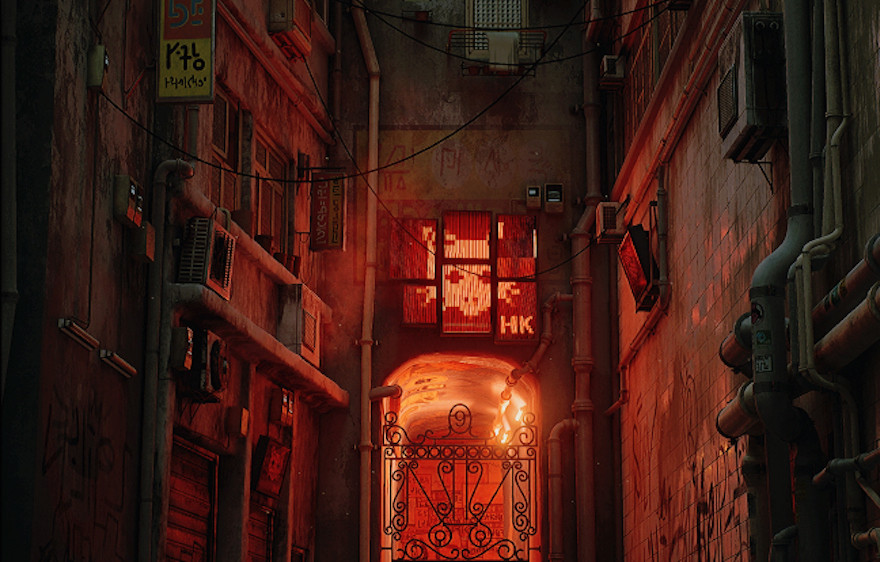 In October of 2015, French duo Koola and Viv released a screenshot of a cat sitting in a dark alley, silhouetted by a hazy red light as the sun filtered in from some unknown opening above. This scene is the first glimpse of the as yet untitled “HK project,” an experiment in third-person exploration that promises to be a pioneering influence on the genre of “cat adventure videogame.” Early glimpses of gameplay send our feline protagonist across pipes and up air conditioner stairs, to its end goal of talking to a bunch of robots, probably.

Though the creators haven’t said much about the setting (“dystopian city”) or the time period (“indefinite”), early art shows robots lounging around the cramped hallways and a small flashing harness on the back of the cat. HK blends the legendary ominous aesthetic of the Kowloon Walled City with characters that seem more in line with the cute dog-bot that romped through the Recore trailer last year, complete with blinking blue eyes. In a piece of artwork released as a thank you to early supporters, one android reaches out tentatively to pet our furry friend. The robots scattered around the concept art don’t appear ominous at all—they actually seem pretty nice.

HK is by no means the first game to tackle Kowloon as an environment. Its density and crime rate made it an ideal backdrop for films about seedy activities like Bloodsport (1988) and Crime Story (1993), inspiring dystopian images of cramped cities in all sorts of media. You can explore the Walled City in both Call of Duty: Black Ops (2010) and Shadowrun: Hong Kong (2015), but neither of them feature a protagonist as charming as this one. It’ll be up to the HK project to prove to us that their Kowloon will be something other than a refuge for gangsters and villains, but if what they’ve given us so far is any indication, that won’t be a problem.

The HK project is still pretty vague in its description, and the only hint at a release date is “not soon,” but Koola and Viv are hard at work making HK’s kitty as cuddly as possible. They ask only for comments and virtual hugs as they continue their journey.