Between the pale blond mop that hangs just over his eyes and the sharp, unpredictable tongue he’s keen to unfurl for the cameras and notepads, Boris Johnson is probably the most ostentatious mayor in the English-speaking world. Many Londoners know him as the civic superstar who likes to huff and puff while his deputy and chief of staff handles the “daily graft of mayoral business.” Many outside of Britain know him only because he occasionally says funny things with a funny accent.

Like the time he boasted on a radio show, “I’m down with the ethnics.” Or when he referred to a certain aging action star as the “monosyllabic Austrian cyborg.” And especially when he called London Assembly members “great supine protoplasmic invertebrate jellies.” BunnyLord, the would-be mayoral star of Roll7’s upcoming Not a Hero, is the pixilated analogue to Boris.

“shoot all the criminals”

BunnyLord, an eggplant with ears protruding from a business suit, is a time traveler. “The future is in danger. Something terrible happens and he has been sent back in time by the Galactic Council to get elected Mayor,” John Ribbins, Roll7’s creative director, tells me in an email. If BunnyLord doesn’t get elected, bad stuff will allegedly happen. It’s the kind of videogame premise that’s easy to laugh aside, except when you realize how often the messaging at the center of real world political campaigns boils down to the same: elect X or the bad guys will win.

But so far, BunnyLord’s electoral ambitions have been thwarted. “The idea is that BunnyLord has traveled back in time hundreds of times in the past,” says Ribbins. “He’s tried being nice, he’s tried bribing people, he’s tried renewable energy —he’s tried everything.” None of it worked though, and so BunnyLord has decided the only thing left to campaign on is a tough stance on crime—i.e. “shoot all the criminals.”

In the current climate, when the criminality of young black men is often assumed, and protests over their death at the hands of police are ongoing, Not a Hero’s narrative context feels at first unsettling. But as the game unfolds, it becomes apparent that Roll7 is lampooning the idea that difficult problems can be solved by shooting them, not endorsing it. Unlike many modern AAA shooters that stumble through complex histories and issues with all the awareness and sophistication of an automatic, Not a Hero seems more interested in having fun with the futility of them. “Persuade undecided voters to your cause,” says the game’s website, “tackling the issues that matter by putting a gun in the mouth of those issues.”

More interesting than his ruthlessly cynical campaign agenda are BunnyLord’s understated non sequiturs. The garbling parody of a modern candidate speaks in a randomly generated style that falls somewhere between the logic of 80s shoot‘ems and social media Mad Libs. “Well call your mama in the room and poop on the badger, Sammy, you’re awesome,” exclaimed BunnyLord after one particular mission.

“I wanted to use BunnyLord to poke fun and be silly”

“Honestly, he kind of found his own voice,” explains Ribbins. “Obviously, at the start I just threw loads of random words into his text generator, but as we went along I started to get a better idea of what worked and didn’t work in the randomizer, and started to write the scenes accordingly.” What resulted from this iterative process was a character with as much personality, and in many cases more, than most actual mayors. “It’s super specific,” says Ribbins, “yet not specific at all.”

Boris is a popular mayor not because of his successful policies or enlightened views, but because he’s a charismatic goober. Rather than make a direct play at political satire, the early scenes from Not a Hero are surprisingly effective as parody precisely because they favor the ridiculous over the righteous. The way Ribbins tells it, “So many action games these days have these elaborate stories about complex geopolitical situations that invariably are solved by killing people in the face and I wanted to use BunnyLord to poke fun and be silly.” 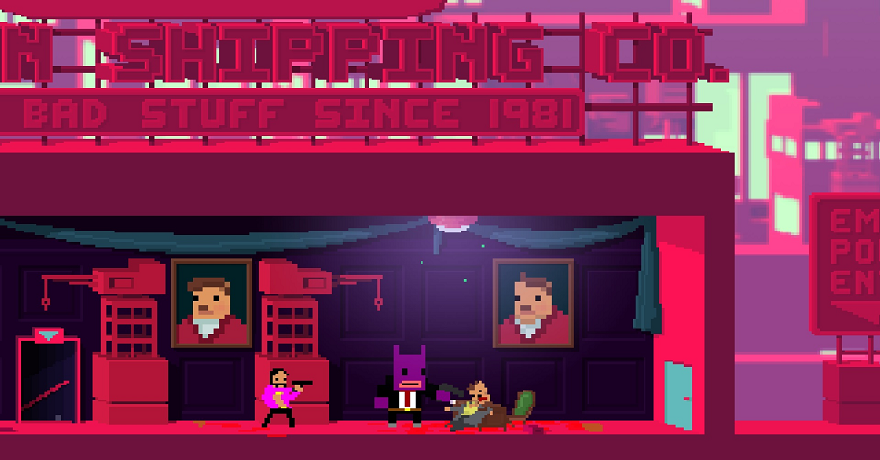 When one of the early missions to take out a high level criminal goes to pot, the player has to fight their way out of a building after the police show up. But BunnyLord considers the silver lining. “Kind of a double bonus with the voters though,” he says. “We took out a notorious gangster and killed a number of law enforcement officers in the process. We should probably focus the press on the notorious gangster bit.” Unlike Battlefield: Hardline, or the Arkham series, Not a Hero doesn’t try to cook the ethical books in seeking an excuse for its violence. There is none. You’re not shooting people for truth, justice or the American way. You’re doing it because an animal put on a necktie and told you to.

And this is where the player comes in. Picking from an array of different unlockable henchmen and women, Not a Hero tasks her with murdering different gangs and criminal syndicates so that BunnyLord can find success at the polls. More often than not, this means breaking into narrow warehouses and gutting enemies while on the way to planting an explosive or retrieving some macguffin (for example: a VHS of BunnyLord in compromising situations).

“we’ve actually made this cover system our own”

It’s here that Roll7 abandons the more fluid platforming progression of earlier projects like OlliOlli in favor of chaotic firefights. Not a Hero’s central conceit, the ability to fade in and out of the background at will, means that knowing when to stop and take cover in the shadows is more important than trying to seamlessly weave in and out of rooms.

In this way, the game is much like Blizzard’s 1994 Blackthorne, if the latter was sped up significantly and took place in a cartoon metropolis rather than the side-scrolling mazes of the planet Tuul. According to Ribbins, “[Not a Hero] takes its visual influence from BlackThorne but kinetically it feels a little like maybe Gears of War or Vanquish, but I think in the end we’ve actually made this cover system our own.”

These influences point to different ways of approaching Not a Hero. The ability to roll or slide into enemies to stun them propels the player forward, while the opportunity to snap into cover at any moment gives her the incentive to slow down and think more strategically. “It’s been a tough thing to balance,” says Ribbins, “but I think you can play the game in both ways.” And ultimately, the thrill comes from moving between both modes without thinking, like perfectly timing the gap between jumps and tricks in OlliOlli. Per Ribbins, “That’s how you look like a fucking badass.

Boris Johnson has never looked like a badass. And neither does BunnyLord. Instead, the thrill of frantically taking out a warehouse full of Russian Mafia muscle is what provides the playfully violent spark that highlights Not a Hero’s overall absurdity. Fresh from the slaughter, adrenaline still pumping, there’s BunnyLord to debrief the player on the previous mission while sucking down a milk shake at Edward Hopper’s childhood diner.

According to Ribbins the way Roll7 brainstormed Not a Hero went something like this: “’Let’s shoot people out of doors,’ ‘OK. Let’s do it!’ ‘Let’s have a dude that can just punch people,’ ‘OK.’ ‘Can there be Katana’s?’ ‘OK.’” It’s not hard to imagine policy discussions resulting from Johnson’s fascination with “bike lanes and bendy buses,” going much differently. When I asked Ribbins if he had been paying any attention to upcoming elections in Britain, he confessed, “I realized the other day that I didn’t actually understand exactly how the UK electoral system worked.”

As the title suggests, Not a Hero is beyond good and evil

“I think BunnyLord is kind of a comment on that,” he muses, “as it’s become increasingly apparent to us that BunnyLord Campaign Team actually has very little understanding of how elections are run.” Not a Hero is as much a colorful and bloody parody of the disconnect between games like Hardline and real-life politics as it is a celebration of the freedom that comes with embracing pure silliness.

As the title suggests, Not a Hero is beyond good and evil, emphasizing the aesthetics of flashing lights, pumping chiptunes and adrenalin fueled twitching while calling into question the slick morality of better known shooters. The cut and dry narrative surrounding BunnyLord helps underline this point. “He’s a Mayoral candidate, the future is obviously in danger and he needs to get elected,” says Ribbins. “But you have to solve these problems by killing people. As far as BunnyLord is concerned” he goes on, “killing people IS how you solve these problems.”