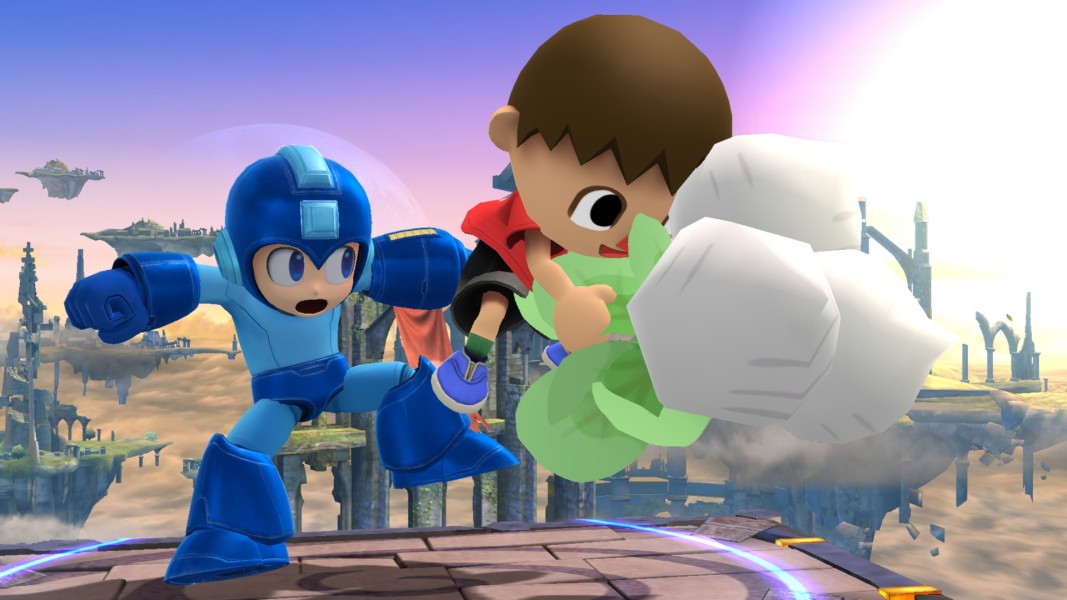 For its most basic use, you still need four steps. The Animal Crossing Villager first plants a seed into the ground. Then it needs to be watered, which can be done at a slight distance if needed. Then the tree has to be chopped down, which takes two thwacks before timbering over. If it lands, as it has an alright but not fantastic range, it will deal a decent blow.

But that’s not the only way to use the Animal Crossing Villager’s tree growing, chopping attack.

Once it grows, the tree blocks projectiles, becoming an arbour shield if you want to hang in its shade. Sometimes the tree will leave a chunk of wood behind, which you can throw after. Even if you aren’t near the tree after it grows, the Villager will swing the axe as a move, which, as you can probably guess, functions as an attack in and of itself—albeit a grisly one.

If you are made huge by a mushroom, the tree will also become massive once you plant it, making its range problem a thing of the past. If two villagers plant a tree too close to each other, one will wither. Because the demo only supports local network play, there’s a few theories I haven’t been able to test decidedly. Can you cut down another villager’s tree? If you can, can you also  “pocket” an entire falling tree to toss out later?

That’s all one move, for one character. And that’s all I alone know of. That’s what the new Smash Bros. seems to be about.

As we’ve explored before, Smash Bros.‘ most passionate seem to play a different game than the one that was made. The game, littered with randomizing items and potential upsets to tip scales for new players, is always stripped back for an incredibly technical experience. This is a fanbase that retreated to Melee as it fit their politics years later, something that has likely puzzled Nintendo since.

Nintendo used to seem intimidated by the devoted Smash Bros. fans. It was only a year ago that Nintendo was seeking to stop the game from being included at Evo, seemingly intimidated by the idea of their properties being used so triumphantly by a second party, for something they perhaps didn’t entirely understand.

That appears to have changed. In fact, to celebrate Smash Bros. at E3, Nintendo livestreamed their own tournament, letting challengers get their mitts on a game they’re passionately awaiting. Now that the demo for the new Smash Bros. is floating around, and I managed to get in on that sweet, high-Twitter-demanded action, I see now that Nintendo is embracing the devotees much more intensely than simply arranging matches. They’re designing Smash Bros. around the way they play.

While there’s always been a lot of calamity going on in Smash Bros., a large percentage of it was more discovered than created. Nintendo gave players the items, the move sets, the stages and a couple elements shared between them, but it’s the players who have been determined over the years to find and exploit the most efficient, aggressive ways to play. What attacks can pierce through other attacks, where is each character’s hit-box, and so on. You can’t help but wonder if Sakurai ever expected edge-hogging to be a thing.

Apparently, edge-hogging cannot be done in the new Smash Bros.

It is fans, not Nintendo, who have redefined the way the game is played, and that’s a gorgeous thing. It is fans who have made Samurai Gunn and Towerfall, which seek to create similar nuances, things for players to stumble upon in the heat of battle. It is fans who share their tips, their tricks, like advice into the ears of arcade strangers. It is fans, not Nintendo, who have developed Project M, their idyllic version. While this new game may not be Nintendo trying to cut them off at the pass, it might be the first time we’ve seen Nintendo start to meet them half-way.

The demo only lets you play as the Villager, Mega Man, Link, Pikachu and Mario, and only play on Battlefield, Smash Bros.’ neutral stage. So because I, and I’m sure oodles and noodles of others, want to play this thing, even if it isn’t much, it means we’ll be playing what we have with a bit of scrutiny.

I didn’t have to work hard to notice all the weird things the Animal Crossing Villager’s tree could do. These were field notes that could be gathered from about an hour’s of play. There were similar observations about a bunch of his other attacks, the Gyroid rocket, the pocket grab, the bowling ball drop. The tree felt like it had the most branches.

Nintendo is embracing the devotees much more intensely.

It feels like the years of insider tips from the other games were going in fast-forward. It feels like Nintendo is just giving it to us. This doesn’t seem like the moveset of the original characters that look basic by comparison. This feels premeditated.

Now, in the coming months, a lot more will be made clear. This is after all, a teaser, and maybe the Villager’s kooky move set is a quiet salsa sampler at Whole Foods, something intentionally put out there to make us wonder what the other salsas taste like. With other chips, even.

But it in any case, it is fascinating. Nintendo isn’t known to just go for fan service. Recycling their own nostalgia, sure, but still making games independently of a chorus. Over the years, Smash Bros. has fostered a passion perhaps only rivalled by their Pokémon base, and unlike Pokémon, a base which played the game radically to their own terms. Whatever anxiety Nintendo had when trying to tamper with Evo are gone, and now they’re embracing this evolved audience in a way we’ve never seen, with the game being tailor made for them.Who knows, in short, what will sprout out of the ground this time.