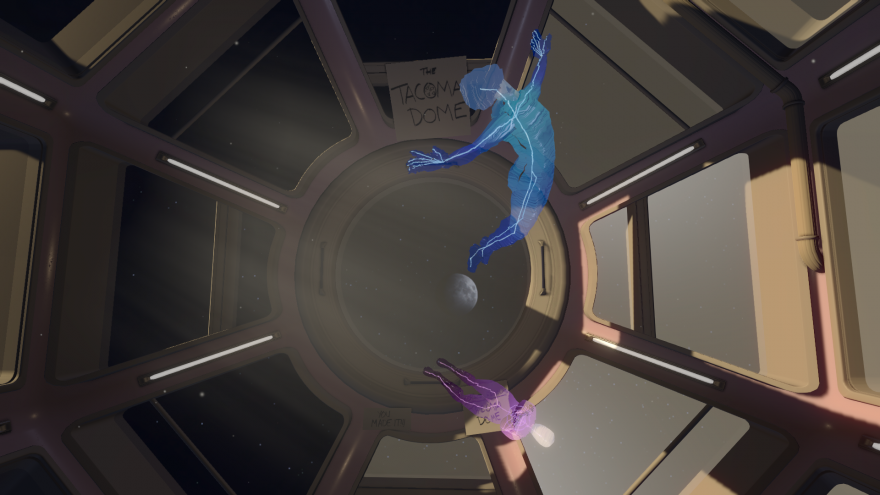 IGN has released the first 15 minutes Fullbright’s next game Tacoma, and it’s looking astonishingly good. We’d already gotten glimpses of its ship as Amy, the protagonist, slipped around in zero-gravity, transferring from surface to surface to navigate the empty ship, and we’d seen the first echoes of those that used to inhabit it: colorful human-shaped holograms, going about their lives on loop as Amy stayed quiet and watched.

we watch them converse and lament, joke and flirt and worry

But with this new footage we get an even closer look at the AR ghosts that drive Tacoma’s plot—we watch them converse and lament, joke and flirt and worry and, finally, fear, as the ship’s systems are compromised and they face T-minus 50 hours of breathable air and no working communications. This digital imprint of memory leads the player into locked rooms or closed drawers where each character and story is held; the rewind feature means you’re free to follow every path as the conversation diverges, one crew member practicing a speech behind a closed door as another pair banters about cooking methods and a second group discusses their imminent return home. The cat, like all other living organisms on the ship, is faithfully replicated.

But in the space between these cheerful glowing figures, the AI Odin hovers with no pretense towards humanity. It appears as a floating triangle with a single eye, almost comically similar to Illuminati symbolism; it speaks in a robotic voice, appears out of nowhere, and disappears just as quickly. The crew members treat it like another shipmate or a friend. At the beginning of the game, Amy is warned not to interact with it—presumably, it is the only sentient being left on the ship. The knowledge that Amy’s every move is tracked and recorded down to the movement of her fingers is unsettling as you explore the empty ship, watching these ghosts, wary of Odin.


Still, unlike Gone Home’s (2013) dark rooms and constant sound of rain, Tacoma doesn’t look that eerie. Perhaps it’s the bright colors of the AR recordings or the normalcy of their voices: they are reminiscent of the spirits in Everybody’s Gone To The Rapture (2015), who were so glittering and spatially present that the reason behind their haunting seemed less frightening. The question of what happened lingers—and the ghosts skip and glitch in key moments, a particularly unnerving thing to witness—but Tacoma feels like a lived-in space, one that once fostered community. It’s a tragedy that this is all that’s left of it.

Tacoma should be out for Windows, Mac, and Linux, and Xbox One in the spring of 2017.