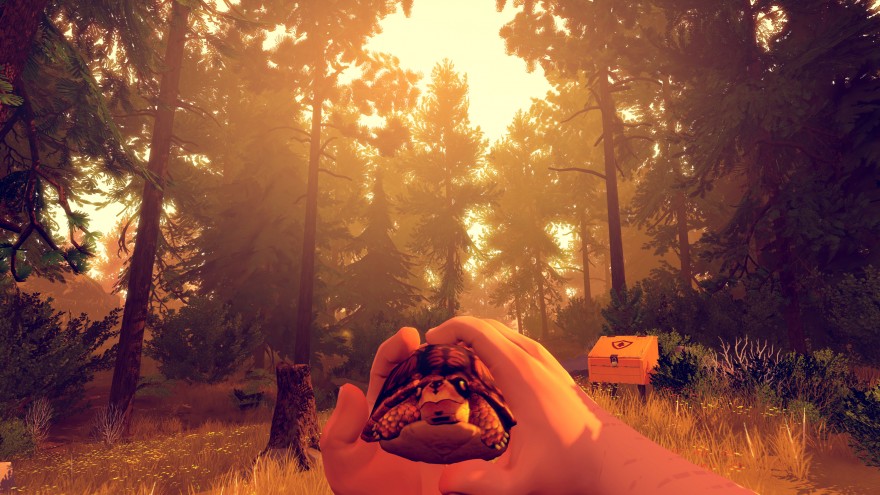 After over a year of teases, our tantalizing glimpses at Campo Santo’s Firewatch are finally getting more concrete, with the latest trailer hinting at a missing persons plot previously unspecified. Led by ex-Telltale, Lucasarts, and Irrational Games designers, Firewatch will focus on interpersonal relationships and atmosphere. As Henry, a new fire lookout in a wild Wyoming national park, you must (literally) learn the ropes on the job. Luckily, your seemingly trusty supervisor Delilah is just a walkie-talkie away, and more than willing to help out.

In the new trailer, we see the relationship between Delilah and Henry blossom a bit more. Campo Santo previously hinted that, depending on your dialogue choices, your affinity for Delilah could take many different turns. What I’m trying to say is: things might get a little steamy in this fire department (please don’t think about that pun for too long—and remember that only you can prevent forest fires). “I don’t talk to the other lookouts as much as I talk to you,” she says in a husky, yet vulnerable voice. “Not in the same way.”

Then, shit gets real. The two girls we’ve previously seen in the gameplay demo released during GDC are apparently missing—and you’re the last person who saw them. Then, shit gets even realer: someone is purposefully sabotaging your equipment, and Delilah is as confused and concerned about it as you are. Then, shit gets the realest, when an unknown entity decides to make a home out of your very own look out tower that’s some miles away from your current location.

But, honestly, the most notable feature in this trailer is neither the budding relationship with Delilah, nor the potential kidnapping. It’s the tortoise. Midway through, an adorably slow, happy little tortoise squirms around in your hand. “You think you’ll take to it? Being out here?” Delilah asks, as you look down at Sir Tortleton III (he has a name now—I chose it) and his ghoulish green grin. Um, yah, Delilah. I’m gonna like it here just fine.

The trailer also comes with the announcement that Firewatch will be available on PS4. So you can enjoy your tortoise with the power of NEXT GEN as well as on Steam for Windows, Mac, and Linux. You can expect a release sometime this year.

UPDATE: Apparently, we have Firewatch animator James Benson to thank for Sir Tortleton III, as evidenced by this absurdly adorable gif he tweeted out.