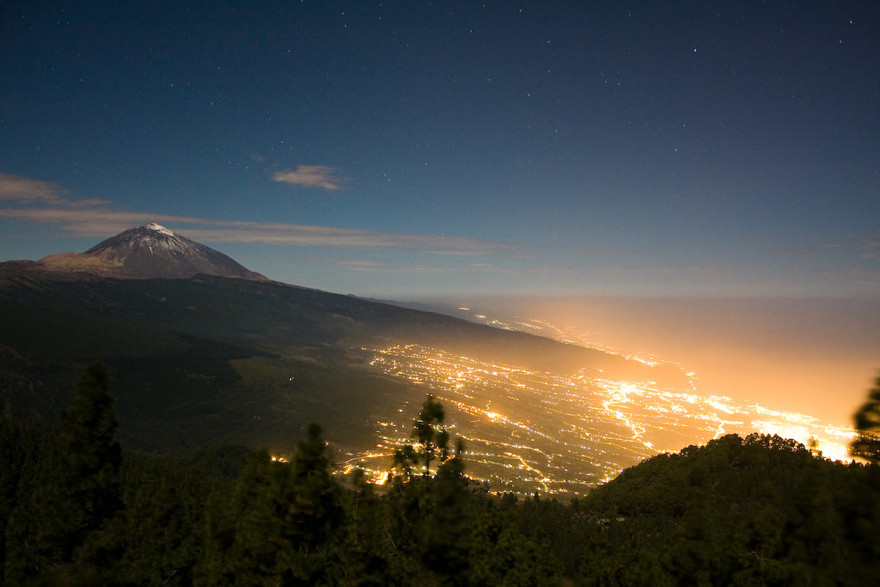 Humans have left their mark on the world, from our cities to the smog. For those of us living in these cities, this effect is more evident, including the loss of starlight. Light pollution hides the night sky from our upward gazes. But some artists are fighting to bring it back.

Landscape photographer Ben Coffman has become obsessed with the night sky. “I have rather romantic feelings about the night sky. I view it as this immutable presence, this view that hasn’t changed since before man walked the Earth,” he says. “It’s my connection to history. Sailors, explorers, and runaway slaves all navigated and were reassured by these same stars. They are literally the stuff of legend.”

Coffman explains that as camera technology has evolved, getting good night-time photos have become possible. His first digital SLR couldn’t even take night photos because there was too much noise in the dark images. But better tech in cameras have resulted in images that are sharper and have much more contrast. He now uses long exposures—up to 30 minutes—to create a photo where the light pollution from cities hundreds of miles away is reduced.

Coffman says, “The views of the night sky I’m able to capture now are much better at conveying the awe I feel while looking at the night sky. I couldn’t have conveyed that sentiment as well with older technology.”

But what if you could return the luminous pinpoints of light to our cities? With the short film “Blackout City,” Nicholas Buer imagines a London where no light pollution exists.

Buer shot London during the day and then processed the shots to look like night. The night skies were captured in the South of England, and utilized to be astronomically correct. Getting the day shots were trickier for Buer, waiting until the sun was obscured by clouds to find the flattest light possible. But then came the hard part.

Buer says, “I tried various post-production techniques such as keying the footage or creating track mattes, but after a lot of experimentation I found that the best results came from masking out each sky, each reflection, each foreground subject by hand. It was a very time-consuming process.”

So why did he share with the world a London without light pollution? “Blackout City attempts to make the invisible, visible, and its agenda is simple. To try and inspire people to reconnect on some level with the night sky; to leave behind the city lights, to travel somewhere quiet on a star-filled night and simply look up,” he says.

The loss of the starry night has not gone unnoticed. Every year, the International Dark Sky Association holds International Dark Sky Week, where people get a chance to see and celebrate the starlit expanse above us. Mark Gee created the video “City Lights to Dark Skies” for the Dark Sky Week of 2014. It starts in the city of Wellington, but moves to the nearby New Zealand wilderness to show the grandeur of a night sky as it passes, sped-up via time-lapse photography.

Gee says, “As an astrophotographer, I’m passionate about protecting the night sky and environment from the effects of light pollution. So I created a video for International Dark Sky Week to demonstrate to people the difference between a light-polluted city compared to an environment without light pollution at all.”

For Gee, it is more than about making beautiful photography for people to enjoy and contemplate. He took thousands of photographs for people’s health—physical and mental. “The effects of light pollution can also be detrimental to our health and upset the balance of nature,” he says. “It would benefit everybody to stop and enjoy the simple activity of looking up at the night sky—I personally spend many nights doing just that, and I’m always in awe of just how small we are in the grand scheme of things. It certainly puts life into perspective!”

The International Dark Sky Association , founded in 1988, states that light pollution hurts people by disrupting their sleep. It also damages nature, by disturbing the ecoystem of local animals. And, of course, all of the extra light is increasing energy consumption. It is also making astronomical study harder to achieve.

Beyond all of the practical considerations of the effect of light pollution, inevitably it is the poetic act of staring deep into the dark sky that we most miss.

“There are few things in life that can instil a sense of awe and wonder like the night sky,” Buer says. “There is a quiet solitude when you are in a wild place under a canopy full of stars and there is nothing quite like gazing into the unfathomable depths of the universe.”