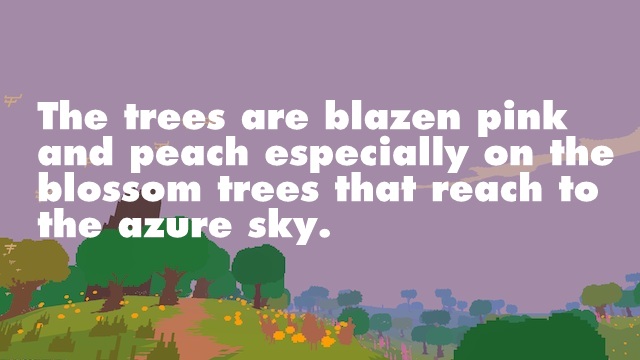 It’s confirmed. When kids today grow up and look back at the media they consumed as tots, they’ll think the same thing we did upon reexamining children’s classics such as Alice in Wonderland or the “Pink Elephants on Parade” singalong from Dumbo: “Whoa, that’s some seriously drugged-out stuff!”

Don’t worry. We have our own equivalent these days. It’s called Proteus.

This is because a primary school teacher who goes by prmrytchr (real name unknown, though he wears a wicked trapper hat) is encouraging creativity in his students by having them write about their experiences with Proteus, the experimental music exploration game for PC that’s kind of like playing a digitized Grateful Dead t-shirt. (The music is oh so much better than Bob Weir’s and crew, which should go without saying.)

In the words of prmrytchr, here’s what happened:

Children explored with enthusiasm and excitement. They soon found their way on to the island and quickly discovered what was and wasn’t possible. A buzz went across the class when someone found something new – particularly the more mystical elements of the game, including the standing stones, ‘fireflies’ and the changes in season. The animals (bees, crabs, rabbits) were popular too.

After playing, the tikes wrote in a journal about what they saw and heard. An excerpt:

Suddenly, the moon starts to drift further down the now orange tropical sky. Sinking below the snowy white clouds, the air warms to a blazing hot temperature, I can feel the blistering hot breeze eat at my bear arms. Now I can feel a furry animal bouncing over my feet. . .

The trees are blazen pink and peach especially on the blossom trees that reach to the azure sky.

Now I’ll stop quoting them for fear one of these child prodigies will nab my job from under me. Seriously, I just had to scrap my Proteus review. After the kids had written their poetic nonfiction, they compiled it all to a chapbook on their iPads. It seems Mr. prmrytchr’s classroom is high-tech. In the past year or so, there has been a movement in classrooms towards incorporating videogames in the curriculum, for instance at the Viktor Rydberg school in Stockhholm where Minecraft is mandatory.

I confess that I feel a bit conflicted by this trend. It’s probably just the Victorian in me, but shouldn’t kids be out in nature and writing poetry about hawthorns and melting sunsets and luminescent fireflies and discarded cicada shells rather than a visual representation of those things? I realize I’m starting to sound like an old coot from the English Department who buttonholes gutless underclassmen about how everything after Modernism is a lost cause on him.

Carry on, students, carry on.