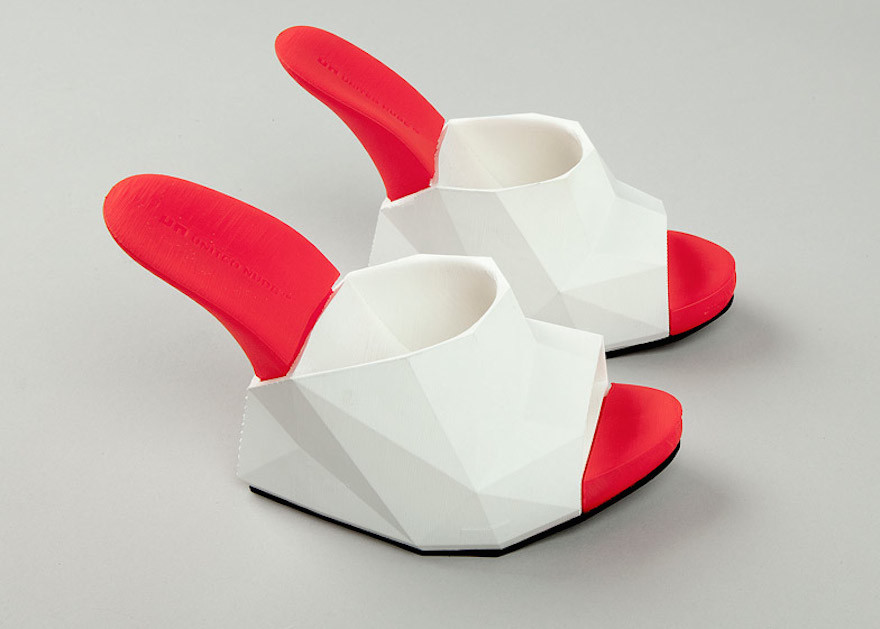 United Nude has produced an experimental heeled shoe that can be 3D-printed and assembled at home by anyone aiming to look like a 1994 Yu Suzuki character. The low-poly footwear is produced in three pieces: first the blocky main portion, then a toe, then a heel portion. DIY cobblers then fit the three pieces together, as seen below. This assembly is part-necessity, given that all of the pieces are supposed to be produceable in a small home 3D printer, but United Nude utilized the juxtaposition for aesthetic effect, too: “The fact that the shoe is made out of three parts actually adds to the design,” founder Rem Koolhaus said. They are not, he also noted, comfortable.

While there are a lot of comparisons to be drawn to the aesthetic of videogames in this work—and in other United Nude shoes, like these sensual, almost robotic boots, and this 3D-printed Hidetaka Miyazaki nightmare—they also feel like the New Aesthetic personified. The term references the confluence of the digital and physical realms in art and media. Harvard’s Matthew Battles says:

New Aesthetic is a collaborative attempt to draw a circle around several species of aesthetic activity—including but not limited to drone photography, ubiquitous surveillance, glitch imagery, Streetview photography, 8-bit net nostalgia. Central to the New Aesthetic is a sense that we’re learning to “wave at machines”—and that perhaps in their glitchy, buzzy, algorithmic ways, they’re beginning to wave back in earnest.

Now, we can wear them, too—comfort be damned.