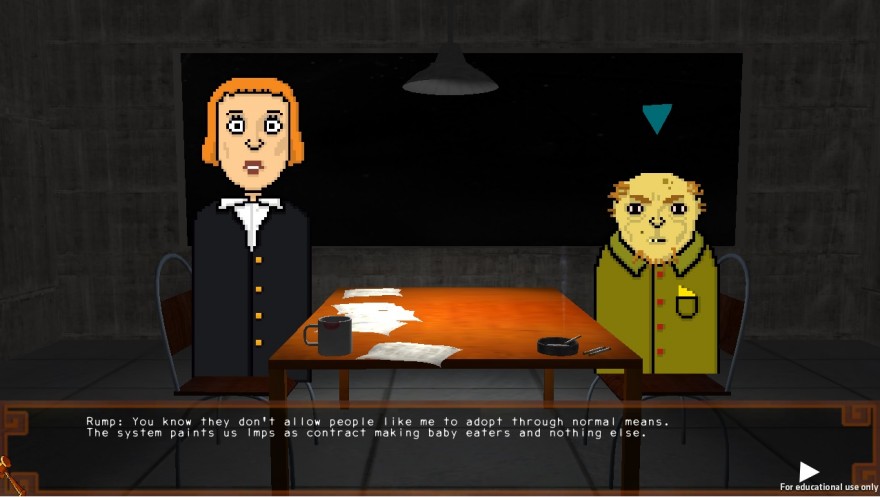 Rumpelstiltskin, that famous grim imp of fairy tale, isn’t fit to be a father, especially of a human child. If we’re talking exclusively to human law, and not any other legal system, this statement is a fact: a child-eating, bent-double monster that preys on the newly-birthed should never be given custody of man, woman, or child.

At interview, he sat opposite me, propped up like a sagging olive-green overcoat by the metal frame of a chair, and answered my questions with incessant grunts. The contrast between us was illustrated by the items placed before us on the desk. I, a mug of tepid coffee with an annulus of red lipstick upon the rim, and papers sprawled out displaying my obsessive detailing of the case; he, a bullet-grey ashtray hosting a propped-up cigarette that billowed an endless upstream of poisonous smoke, and two more cigarettes sat beside this, no doubt dreading the moment those cold, crackled imp lips would embrace them disgustingly.

“I just feel like the system is already stacked against me, an aspiring impish single father,” he gurgles out past his throat and into the air, turning it stale. He’s not wrong, and it’s my job as his defense attorney to win him the child that the helpless queen of the land had once agreed to give him in return for spinning an entire room of straw into gold, all in effort of her evading a beheading at the king’s order. It’s a back story true to the fairy tale, but this game updates it for the early 21st century, albeit Rump—the imp’s nickname fittingly referring to meat of the hindquarters—is no less vile and contemptuous than before.

His face is humanoid but warted and cracked: its geography describes an archipelago of moist ill skin protruded upon soft bulbous browns, his eyes sporting an entirely red gloss around the dirty pupils, while a rigid crack rips the sallow skin apart just above the chin to reveal an unclean hollow of broken molars and the rotting fatty hems of child flesh. It’s ugly, but I’ve seen this before for real, in the streets and on the television, in what could be argued are the worst human specimens.

And yet, here I am in a courtroom, believing my own half-twisted truths, manipulating the jury to see a false zeal in my client’s snarling facade. Every proposal I cast at the queen, defendant in this case, sees her writing her own condemning confession. She admits to being a frequent drunk, to knowing how much meth a baby could fetch in street trade, and confesses that she had broken trespassing law when sending a knave to the imp’s house to find out his name.

I barely have to try to win, and can only hope that Rump will ignore my previous pleads and talk about the apparently nutritious benefits of his imp milk when under questioning. That would surely sour the jury and put the favor towards the queen, while I couldn’t be accused of evading the best performance toward my duty. But no, the blasted imp talks of the prejudice against him, and fibs about how he has the baby’s best interests at heart. The scoundrel. The cheat. The liar.

Rump has the baby now, and I suspect he’s already written a recipe with which to dine upon it. At least it will perish before knowing the world. As a desperate clutch for a pacifier, I wonder whether or not it would have had a better alternative life anyhow; having been born to a careless, debauch mother and an abusive father. Is the purpose of this modernized fairy tale to illustrate the greed and depravity of both its species? It certainly seems that way.

You can play They Call Me Rump for free on itch.io.