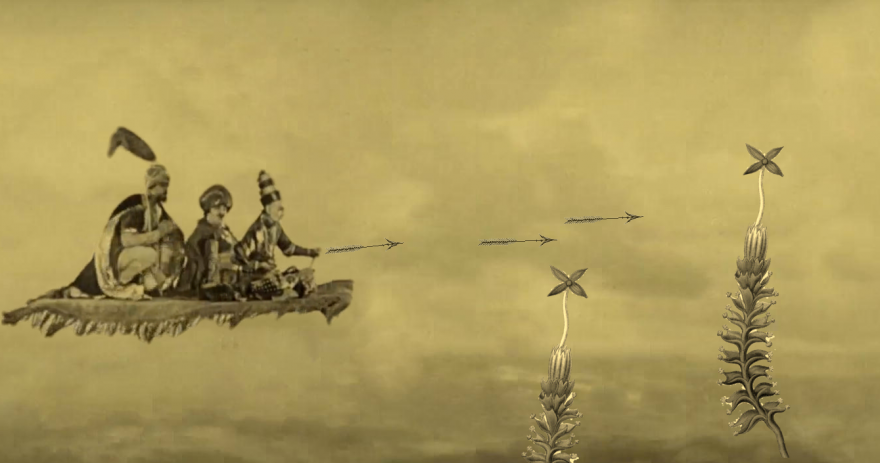 TOBAFCASS, or Thief of Bagdad – A Flying Carpet Arabian Side Shooter, may be one of the few games that can accurately hold that title. Inspired by the Douglas Fairbanks silent film of the same name (well the Thief of Bagdad part), TOBAFCASS has you controlling three adventurers on order from a Sultan to save a Princess.

Braving a sandstorm, the trio hop on their magic carpet and are on their way. It’s the typical, simplified tale one would expect from a ‘20s-era silent movie about “The Middle East,” but rendered here in the form of a side-scrolling shooter, it takes on a new, slightly surreal charm.

Rostok’s games tend to be unforgiving

It’s only made more odd for its use of real, live-action characters aboard the magic carpet you control; the game’s enemies made up of lithographic prints of various sea creatures taken from the German biologist Ernst Haeckel’s book Kunstformen der Natur.

Let’s not forget its soundtrack either: an electronic take on traditional Arabic music, lo-fi oud punctuating a backdrop of breakbeat drums.

According to Rostok, the game TOBAFCASS borrows from most is Agony, the bizarre and hellishly challenging Amiga shoot ‘em up from 1992, where you control an owl through a series of hostile worlds, blasting monsters with waves of echolocation.

Based on the two I’ve played, Rostok’s games tend to be unforgiving themselves. One-hit kills and few health points make getting far in TOBAFCASS pretty tough, and some of the puzzles in The Bear, the Cat, and the Rabbit (one of my favorite games this year) were as hard to penetrate as some of the isometric games of decades past it was made to resemble.

If you like a challenge and value some interesting visuals alongside, check out Rostok’s itch.io.