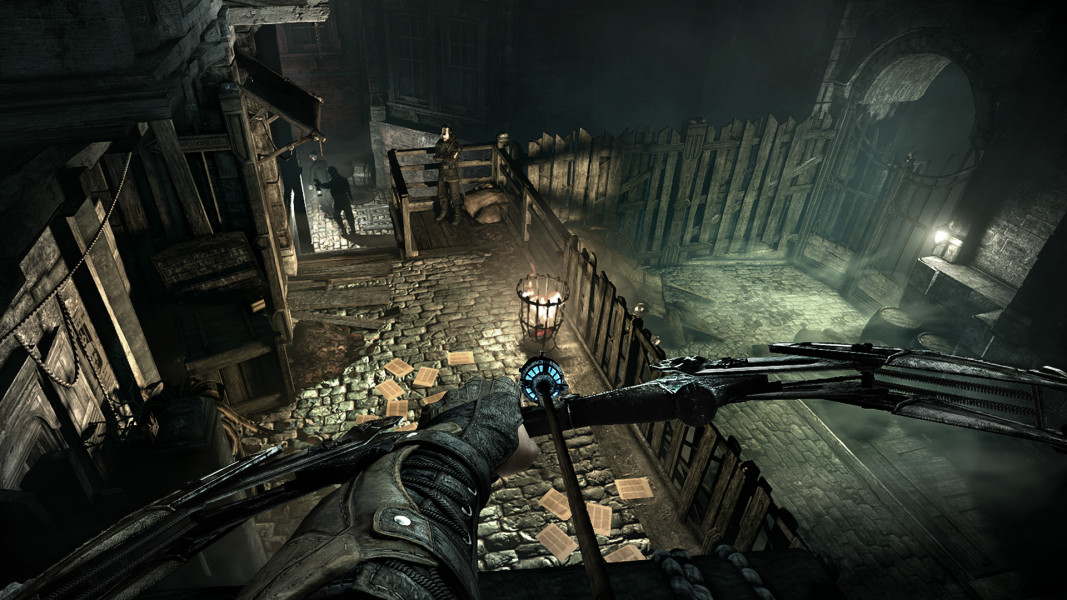 But then developer Eidos Montreal swept the new systems under the rug, saying that it was thinking about removing the mechanics all along. Internet hyperbole to save the day, as usual. But it does raise the question: What sort of world is Thief reentering? What is the state of the stealth genre?

Harvey Smith—who worked on the original Deus Ex before moving on to Arkane Studios and the celebrated Dishonored—thinks the genre has instead gone through a process of minor evolutionary refinement.

“For Deus Ex, and certainly for Dishonored, we deliberately went after the goal of making the game fun after the player gets busted,” he said. “In a way, this dilutes the purity of stealth, but it does so in the name of another kind of excitement.”

Smith and Arkane Studios co-creative director Raphael Colantonio believe that this added complexity creates more interesting ways of approaching a goal. Particularly for Dishonored, mixing together exploration with stealth and combat allowed players to manipulate missions with a degree of controlled chaos. Summoning a field of rats would attract the guards’ attention while blinking across rooftops would help the player remain unnoticed. Or you could crawl in through the sewers and kill all the guards one-by-one. These variations made the game.

With more tools like the sleep darts and razor wire traps, stealth afforded a predatory element to Dishonored.

Before that, though staying hidden in stealth games was essential to your survival. Being caught meant almost instant game over screens. Remaining undetected now leaves open more options for players to manipulate the world. With more tools like the sleep darts and razor wire traps, stealth afforded a predatory element to Dishonored and ways of fending off enemies once spotted.

Still, remaining completely unseen was still a viable option. Colantonio still believes playing as a ghost can reward players with more hidden insight into the game world and information than leaving a trail of corpses..

“I think that one of the rewards for players who stay hidden is the fact that they can observe the world and feel like they are peeking behind the scenes […] to peek in on the AI characters, to follow their schedules, and eavesdrop on their conversations,” Colantonio explained.

“Occasionally something surprising happens, or we get a piece of information (like a secret safe combination, or a bit of side story), and more direct players miss out on those things,” he said.

While the genre has matured, stealth has also permeated into other types of titles—much as RPG-style progression have become ingrained in everyday shooters. Limited enemy AI perception, or “analogue awareness systems,” as Smith calls them, have found their way into even more titles like The Last of Us, Far Cry 3, and the Assassin’s Creed series.

“[It] goes beyond ‘the stealth genre’ and pushes a game closer to simulation, toward something that feels more organic,” Smith said

Colantonio added, “[F]or a long time, AI characters were just magically aware of the player whenever they entered the room, but now many games support awareness based on sight and/or audio.”

Staying hidden is still hard enough to present a challenge but other, more lethal or direct options are still open.

This branching mutation has created a new action-stealth hybrid. In these games, staying hidden is still hard enough to present a challenge but other, more lethal or direct options are still open.  In Far Cry 3, coming up on a base hidden in shrubs and setting a captive tiger loose would be the perfect distraction, or for those lucky enough, wipe out an enemy camp entirely. In the Assassin’s Creed series, berserk darts opened up options to have guards fight your enemies for you.

The stealth genre has not only evolved: it’s spread. Even if games that only incorporate a light stealth element like Mass Effect 3, it can dictate the the way players tackle a level until they’re spotted.

Stealth games might not exist with the same bucket-of-cold-water difficulty they once had, but it’s too easy to say that the genre has been completely sullied. Rather, it’s modernized: growing in complexity, spreading its roots. For others that want a return to stealth in its purest form—without knocking enemies unconscious or ever being seen—Thief could be that game.