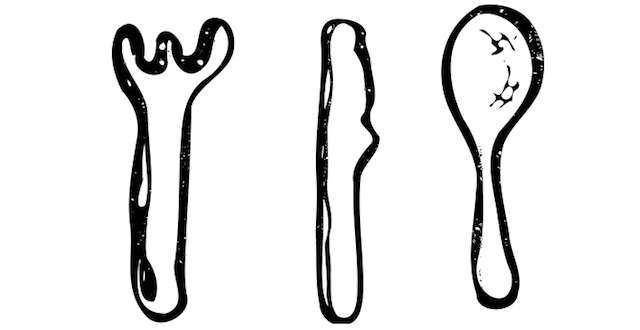 Descending a sunlit mountain path just after exiting the cave at the beginning of The Elder Scrolls V: Skyrim, I found myself at a crossroads. I could follow the stony trail toward Riverwood, the game’s first village, or I could take the road less traveled. That’s when I noticed the lovely insect floating above my head. The butterfly lit upon a large rock, then took to the air. I looked up, plucked the creature out of the air, and checked my inventory. I’d already plucked its wings from its body—presumably to be mixed into a potion. Rather than waiting to find a use for this strange reagent, I ate the wings. A golden aura swirled around my body and I discovered that butterfly wings can restore health. It was then that I decided to push west and eat everything in Skyrim that I could get my hands on.

At the base of the mountain I find a lake that drains into a fast-moving stream. There, just before the bridge, are three blessing stones. The three, jutting rocks were etched with the visages of adventurers—the mage, the warrior, and the thief. Engaging the deities in this way would begin a long journey toward glory. Instead, I plunged into the lake and found that I could pluck fish out of the water with my bare hands. The salmon was already cut into a neat pink fillet when I examined it.

A bee and a dragonfly.

The small island near the shore closest to me was buzzing with bees. Sheltered on one side of the island was an elven fisherman, idling casually in his campsite. I attempted to chat him up, but the alien-looking man didn’t have much to say besides a weak rationalization for his habit of poaching. I plucked one of the bees from the air behind him and popped it into my mouth. The dragonflies were much more difficult to capture. They hovered just above the surface of the water, but darted much faster than I could swim. It took a bit of flailing around in the shallow water before I caught and ate my first dragonfly.

Night came as I was stalking a moose hoping to taste some of its meat. A nearby wanderer serenaded me with a lute as I crept after the beast in the moonlight. But my aim was too poor and the animal too quick. I caught some movement out of the corner of my eye and followed it toward a small grave. A bit of cloth held down by a rock flapped in the wind. A skeleton rose from the earth and we fought. After the melee I noticed a small swarm of glowing bugs circling a small pine. I took one and tasted the thorax.

I found a small wooden shack near Half-Moon Mill. Inside was a makeshift abattoir with a freshly butchered cattle and some venison arranged on the workbench. A couple of pieces of gore appeared to have been kicked under the bench. Two rabbits hung from hooks. And in the corner, by a bale of hay, rested an enormous troll skull. Outside a chicken clucked, shuffling through the dust. I took to my knee, drew my bow, and put an arrow through it.

I pick all of her crops and sell them back to her, saving one of each to taste for myself. The wheat is edible but unappealing.

I chase game westward through thin pine woods, hugging close to the path. I see fox and rabbit, but they move too quickly to spear with my arrows. I eventually stumble upon a dead fox at the side of the road and take its pelt—there is no edible meat to be found on its corpse. The weather begins to break as I step into a vast plain. I spy an elk shambling in the distance and run after it. I loose and whiff a half-dozen arrows before one finds purchase in the beast’s flank. But that doesn’t slow him down. I fear that I’ve lost him when I see a wolf jump from the brush and take my quarry down in one fell swipe. I kill the predator, then examine the elk, finding a good red cut of venison on his corpse.

It is raining by the time I get to Rorikstead, a small weatherbeaten farm on the far end of the tundra. Small plots are ringed in by a low wicker fence. An uptight woman works her crops of potato, wheat, and cabbage. “We’re honest, hard-working folk here and we don’t suffer beggars or thieves,” she says. I pick all of her crops and sell them back to her, saving one of each to taste for myself. The wheat is edible but unappealing.

The largest building in Rorikstead is a long hall called the Frostfruit Inn. Inside a large fire-pit dominates the room. Rough tables set with plates and utensils ring the walls. At the far end of the room is a small bar where the proprietor plies his wares. “I only take real coin,” he says. “No handouts.” I spend all of my meager funds, looted mostly from the dead, raiding his larder, and opt to save the food for later.

Broke Tower Redoubt is a huge fortress that looms over a narrow mountain pass. The place is guarded by the Forsworn—a tribal bunch who attack on sight. I kill the guards outside and begin to pick through their base. I move room to room, rifling through cabinets stocked with supplies and tables set with the evening’s meal. The wheels of cheese are stowed on sparse yet orderly shelves. Bread is arranged on tables in whole, unsliced loaves. I find the slab of cooked salmon steak on a plate. I probably killed the man that this dish was meant for. Again, I save my loot for a later feast.

I stuff my face right there in the middle of the fight and when I’ve eaten the last crumb, my wounds close.

I spy a goat running across a narrow stone bridge. The span crosses high over the first inklings of a river, descending the mountains in rapids and waterfalls. I crouch and shoot at the goat, killing it with my first arrow. Beyond the bridge is a fork. I forgo the steep, uphill path for the main road where pilgrims travel on foot and horseback. I ignore their stories and push ahead and discover Blind Cliff Cave.

There’s nothing to eat inside this dim, misty cave. Just angry human denizens set on killing me. I struggle with groups of them, taking blows and arrows from behind while I try to fight. I’m on my last legs when I turn a corner and find three more enemies. One casts a fearsome fire spell that engulfs me in flames. I hack at them with my axe, killing two, but am almost dead when I turn toward the last of them brandishing her sword. I pause to open my sack, and eat everything I’ve saved inside. I gobble the loaf of bread whole and devour the grapes in one gulp. I put two whole cheese wheels into my mouth and inhale the grilled leeks. I stuff my face right there in the middle of the fight and when I’ve eaten the last crumb, my wounds close. I am healed. The lone enemy takes a crack at me, but the attack does little. I kill her and follow the cave upward to the beginnings of a tower.

I dig into a barrel and find a single raw carrot. I hear voices outside. Guards on the outside of the tower have heard me rifling through their belongings and now they’re coming to get me.

I eat the carrot anyway.