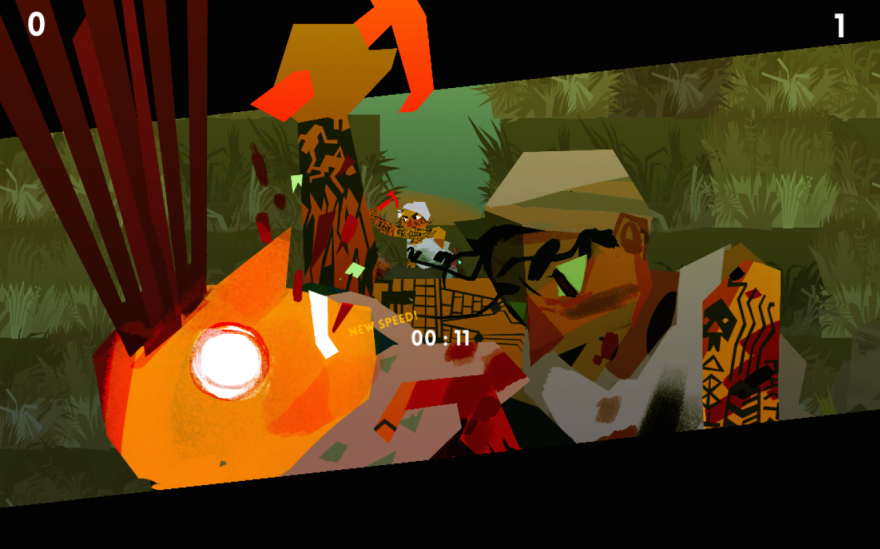 Over the past few years, the violent videogame has fallen out of grace in some of the communities surrounding videogames. Following decades of criticism for mindless, juvenile killing by mainstream media, the industry’s efforts to counteract its infamy has both opened and closed many doors. That’s why in certain academia and among smaller scale game-makers, violent games now tend to be seen as too gauche to even consider—a vulgarity only frat boys could enjoy.

And so it is, in the age of the “empathy game,” unabashedly violent videogames are slowly falling out of favor, and for some have simply gone out of style. But not for NYU Game Center MFA student Winnie Song, who seems to be working towards bringing bloodshed back into style—not that it’s necessarily her intention—following the premiere of her hack-and-slash hide-and-seek game Badblood from last month’s student show.

“Honestly at first, I was hesitant to say I was making a violent game,” Song admits. “I was afraid of people getting turned off by it, or just thinking that I had issues or something. Then halfway through development, I just stopped caring. I decided to make the game I wanted to make.”

Her initial inspiration was innocent enough, too. Song played a lot of outdoor games as a kid, and “nothing got my blood pumping like a game of hide and seek.” Her original concept featured a hot seat, turn-based multiplayer type gameplay, where players tried finding each other in an apartment building. Yet, something about the experience was lacking; that palm-sweating tension of the hide-and-seek game almost entirely absent.

Then Song had a vision: “this image of two people playing hide-and-seek in real time, on a loop, forever—every round punctuated by an act of violence.” In essence, she sought to solve the problem of local stealth multiplayer games, which tended to either show too much or not enough of the each player’s position. After some trial and error, Song finally arrived at the idea of a split screen in combination with randomly changing camera angles.

she sought to solve the problem of local stealth multiplayer games

In a round in Badblood, you must constantly orient yourself, trying to get a grip on the shifting, hostile, cut-throat environment—while simultaneously trying to search and destroy the enemy yourself. “It was the added cognitive challenge the game needed,” Song explains. “And it got at that primal, animal instinct we all exercise in a game of hide-and-seek.”

During testing, Song realized that, while under mental duress “human beings react unpredictably and uniquely. All players were highly adaptable and varied in their strategies for survival. There was no ‘right way’ to outsmart their fellow man—which is both scary and thrilling.” Players’ takes on the gameplay were wildly divergent, too, “some describing it as very tense and suspenseful, while others said it was very chilled out. One consistent reaction from players, though, was enjoyment of the hunt-or-be-hunted circumstances.”

Another consistent reaction Song noticed in players was more nonverbal. Those who watched a game of Badblood often talked about its violence, usually with a bit of mild shock in their tone. Yet, the minute those watchers became players, even the most communicative of the bunch dropped full sentences, and instead seemed only capable of communicating with their opponent in screams and grunts.

“That’s part of the reason I made Badblood so violent,” Winnie explains. “So people could feel both that primal aggression and vulnerability—how the viciousness of the attack effects both parties equally.” Unlike the violence of a first person shooter (which Song also admits to loving), the killing mechanism in Badblood is as personal as you can get. You learn a lot about human beings in that moment of bloodshed. “Because humans, as well as being vulnerable, are passionate—and having these two vengeful characters with blood on their minds, outsmarting and ambushing each other, is a way exploring that truth in one another.”

“In this game, murder is a very clear-headed act—the act of someone who wants to live”

But, whether winning or dying, Song ensures Badblood is first and foremost a fun experience. She worked hard on styling the kill-screens, so whether you’re the player getting your throat sliced open or the one doing the slicing yourself, both can look forward to the final exchange. Inspired by the blood-pumping violence of Tarantino movies, Badblood‘s aesthetic strikes that perfect balance between the appalling and enthralling, each instance of blood splatter like a descent into the seediest parts of human nature.

“There is a sense of determination in the way the characters in Badblood go out into the field, like it’s a stage,” she says. “In this game, murder is a very clear-headed act—the act of someone who wants to live. That’s my vision of the game: a hostile No-Man’s Land, where people try to survive each other.”

Though Badblood is still in the development stage at the NYU Game Center’s Incubator program and cannot be played by the public yet, Song has advice for when it gets its commercial release (most likely in September). “Don’t underestimate your opponent,” she warns. “A lot of deaths in the game are caused by being too careless, and showing too much of one’s hand. Anyone can win at Badblood, just like anyone can win at hide-and-seek. It’s just a matter of knowing your own surroundings, and recognizing what your opponent is capable of.”

You can keep an eye on Badblood through the official website, and keep up to date with creator Winnie Song on Twitter.