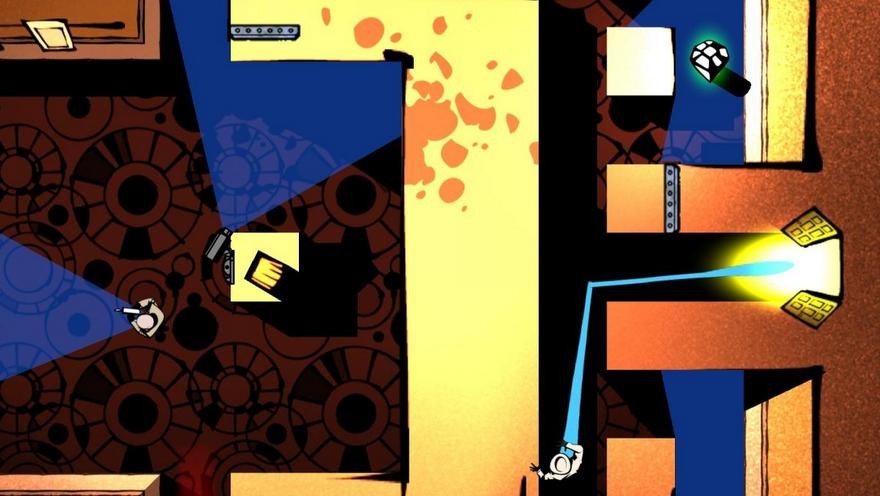 The noir genre hasn’t changed much since the middle of the 20th century. Its conventions have remained pretty much intact for decades. Modern noir still features cynical crime solvers, decked out in trenchcoats and fedoras, struggling against corrupt bureaucracies. Its settings and characters are still cast in black shadows, underscored by mournful jazz saxophones. For a lot of creators the ‘30s and ‘40s just haven’t died. Sure, there have been times when the genre has been abstracted to good effect—films like Fargo and many of Haruki Murakami’s novels have managed to maintain a cynical tone and ambiguous morality while leaving behind more explicit genre signifiers. But noir is often used less creatively, its weary detectives and smoky offices trotted out exactly as they’ve always been.

Moonshot Games’ Third Eye Crime belongs to this orthodox tradition of noir media. Its protagonist Rothko is an expert thief who lifts expensive paintings for money. He wears a brimmed hat and a suit; he gets in over his head when a simple job is complicated by a mysterious woman and a local mob boss; he narrates the story with phrases like “getting played like a cheap violin.” The only real difference between Rothko and the Marlowes or Jakes who came before him is that Third Eye Crime’s hero has a limited psychic ability that allows him to see where guards think he’s hiding.

This, of course, is the hook that is supposed to make the game stand out. Each of the levels that Rothko must navigate play out like a cross between Monaco and Metal Gear Solid, a top-down, blueprint-style perspective mixing with “vision cones” that show the area that guards or cameras can see at a given time. If one of the enemies spots Rothko they’ll head to where they think he’s hiding, a red splotch on the map that represents the protagonist’s psychic intuition. The DNA of a stealth game often shares more strands with puzzle than action games, and Third Eye Crime makes this obvious. Regardless of whether Rothko is breaking into a prison or chasing another character through a castle, the objective remains the same: get from the starting point of a room to the glowing door that marks its exit. The slow pace of the character movement and deadliness of every enemy means that every move must be carefully pre-determined. This thoughtful planning and death-by-detection makes Third Eye Crime feel like one of the most traditional stealth games in years.

As inflexibly reverent to the tropes of noir as it is to the stealth games of the past.

But, here’s the problem with traditional stealth games: the reward of successfully ghosting through enemy traps is usually outweighed by the frustration of learning how to exploit rigid, computerized patterns. Third Eye Crime is an experience built on repetition—on playing the first minute of a level over and over again because a minor slip-up led to immediate defeat. It is a game where the player feels like a god for slinking straight across a perilous level, but has usually only been able to pull this off by restarting that same level a number of times beforehand. If the story was a bit more interesting there might’ve been a bit of salve for this kind of annoyance, but the noir plot is as inflexibly reverent to the tropes of that genre as it is to the stealth games of the past. Rothko’s story is a boilerplate drag full of unsurprising plot twists and rote characters. The Sin City-style comic sections that convey this straightforward tale of dangerous dames and shady politicians are similarly uninspired—they’re just competent reproductions of an aesthetic that everyone’s seen before.

Third Eye Crime offers noir and stealth game staples as they are and is content to let the strength of past accomplishments in these genres speak for themselves. This doesn’t seem like the greatest approach, given the value that innovation brings to well-worn experiences. In recent years stealth games have been (pretty successfully) redefined by developers like Klei Entertainment, Pocketwatch Games, and Arkane Studios. While there is a place for traditionalism in design, time only moves forward. Stubborn adherence to the modes of the past only goes so far. Third Eye Crime would be a better game for recognizing this.