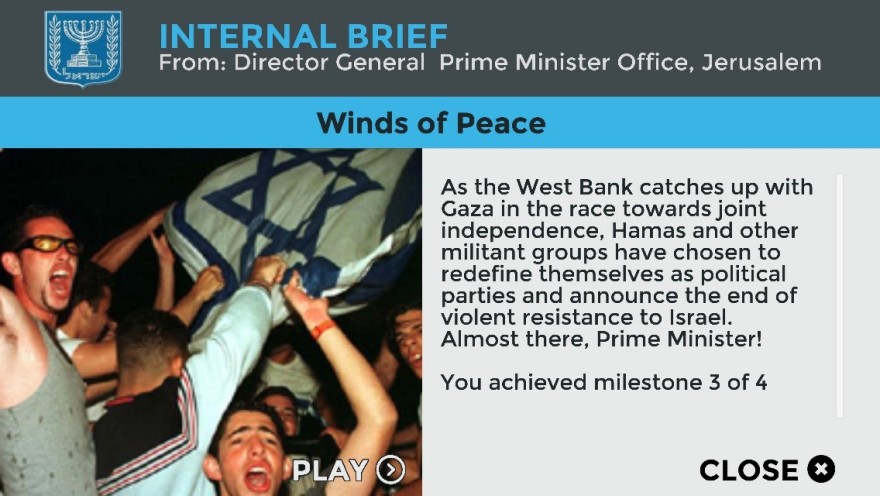 I solved the Israeli-Palestinian situation over the weekend, and the experience didn’t fill me with hope for the future.

Let’s backtrack a little: Benjamin Netanyahu is still Israel’s prime minister, Palestinian statehood is still far from a reality, and international pressure or support for any just outcome is lukewarm at best. All of which is to say, my solution could only exist in a fictional universe. And so it does—I was playing ImpactGames’ PeaceMaker: Israeli Palestinian Conflict, which was recently updated for iOS and Android.


PeaceMaker tries to play down its fictional side. It is very much of this world, opening with a montage of archival clips that goes back to the 1940s, including Winston Churchill’s inspection tour of Julich, Germany. The clips that follow tell a depressing story of violence on both sides interspersed with the occasional summit. The opening montage is reasonably evenhanded though narrow in its focus on high politics. There is no real room for the broader effect of the last 70 years on the welfare of all involved. This is serious statecraft, the intro signals, and that impression is only furthered by the game’s dashboard, which is full of dials measuring changes in popularity occasioned by each decision you take. At the center of the screen is a map resembling the one used in the Civilization games. As crises arise, different cities will appear in squared off crosshairs. Make no mistake, PeaceMaker’s design tells you: This is serious work.

Who said peacemaking was hard?

You are working as a head of state, either Israel or Palestine’s—your choice. If you can’t choose, the game will do so for you. The differences between the two positions are largely flattened by the game’s mechanics. You make decisions about politics, security, and construction. Each of those decisions causes the games’ Israeli and Palestinian popularity scores to shift. Achieve a 100-point rating on both sides, and peace will have been achieved. The game’s central conceit is that the average action will make one side marginally happier and the other marginally less so. This is both true and facile: Peace is hard. But that is PeaceMaker’s real insight into the peacemaking process. So, sure, it’s hard to find policies that please both Palestinians and Israelis and that goes a long way to explaining why both sides are where they are today.

But in PeaceMaker: Israeli Palestine Conflict, a mutually acceptable solution can be achieved. Actually, I pulled it off on my first try. The game had randomly assigned me the role of Israeli prime minister. Mazel tov, I muttered under my breath. The job, it turns out, is not that hard—at least if you aggressively buy off your citizenry with economic stimulus packages, ignore your ministers, use the police to tamp down protests, crack down on settlers, very gently pressure your Palestinian counterpart, and ignore all news involving Iran. Twenty minutes later, I had cruised to a two-state solution. Who said peacemaking was hard?

PeaceMaker tries ever so hard to be reasonable, but its path to victory is that of a supremely fanciful game. Each individual move is plausible enough, but the possible combinations boggle the mind. In that respect, the game comes to feel like geopolitical Tony Hawk. Initially, I found this thrilling: For the first time in my life peace and Palestinian statehood were within reach. After a few minutes, however, the absurdity started to eat away at me. Was there really no decision that was too unpopular to end the game on the spot? Did I really have an unlimited amount of time to achieve peace? Was the support of my constituents and government really that stable? The biggest luxury in PeaceMaker is time and patience. Yes, the conflict it lightly fictionalizes has been going on for decades, but the average politician does not last that long. After 30 minutes of radical peacemaking, what I really wanted to know about PeaceMaker was whether my avatar could meet the same end as Yitzhak Rabin.


Following an appearance at a 1995 peace rally in Tel Aviv, Rabin was shot and killed by Yigal Amir, an extremist who believed the prime minister was betraying the Jewish people. That assassination and the context out of which it emerged is the focus of Amos Gitai’s documentary, Rabin, the Last Day, which opened in America last weekend. Seeing as memories are short, it’s worth returning to the time of the Oslo Accords, which were meant to lead to Palestinian self-determination (though not statehood). Rabin, the Last Day brings back the fevered reactions to Rabin’s negotiations with the Palestine Liberation Organization’s Yasser Arafat. Gitai shows posters with Rabin depicted and scenes of extreme parliamentary rancor. (Rabin was also the target of multiple failed assassination attempts in the year leading up to his death.) The film is not exactly a whodunit—the proximal who is the only thing we really know—but it is an investigation into how the events of November 4, 1995, came to pass. There’s plenty of blame to go around.

I tested PeaceMaker on Friday, and that would have normally been that, but I couldn’t escape the Rabin question. On Sunday evening, I finally gave in and fired up PeaceMaker for one last test. I played as the Israeli prime minister using the most difficult setting available and set out to become the most polarizing politician in the country’s history. (To be clear: My policies bore no deliberate resemblance to Rabin’s. I was purposely more impractical and polarizing just to see how the game would react.) I attempted to demolish settlements and walls, rolled back military and police deployments, sent aid to Palestine while spending nothing on domestic policy, and offered my Palestinian counterpart as much support as I could. Consequently, I was very popular in Palestine and desperately unpopular at home. There are no elections looming around the corner in PeaceMaker, but if there were I’d have had a better shot in Ramallah than Tel Aviv. Still, no matter what I did, I remained in government and untouched.

I broke PeaceMaker after just five minutes. The game’s website indicates that it is possible to be removed from office if you are too unpopular, but that is not what happened to me. A video announcing a terrorist attack popped up, as such videos periodically do in the game. When the video came to an end, however, I could not return to the action. This had never happened when I was playing to win. I was stuck in an infinite loop, left with nothing to do but watch the footage over and over again. I was still in office, but fundamentally powerless. Time refused to move forward. I conducted the experiment a second time and met the same fate. PeaceMaker’s narrative may not feature the likes of Yigal Amir and it may indeed be possible to get kicked out of office, but the fact that the game breaks down in situations of extreme polarization is perhaps more revealing about its worldview.

That is a fitting encapsulation of the PeaceMaker: Israel and Palestine Conflict experience. The game has an immense capacity to be imaginative—the two-state solution is achievable in a remarkably brief amount of time—but that imagination only extends so far. The game cannot conceive of individuals acting in poor faith or outside of ‘reasonable’ parameters. Indeed, it fetishizes a narrow definition of reasonableness. Members of your side may disagree with you, but the game expects them to act reasonably. History, however, has shown that the sort of reasonableness PeaceMaker traffics in is in short supply, both domestically and internationally. Would that more of human behavior matched ImpactGames’ models, we might be better off.