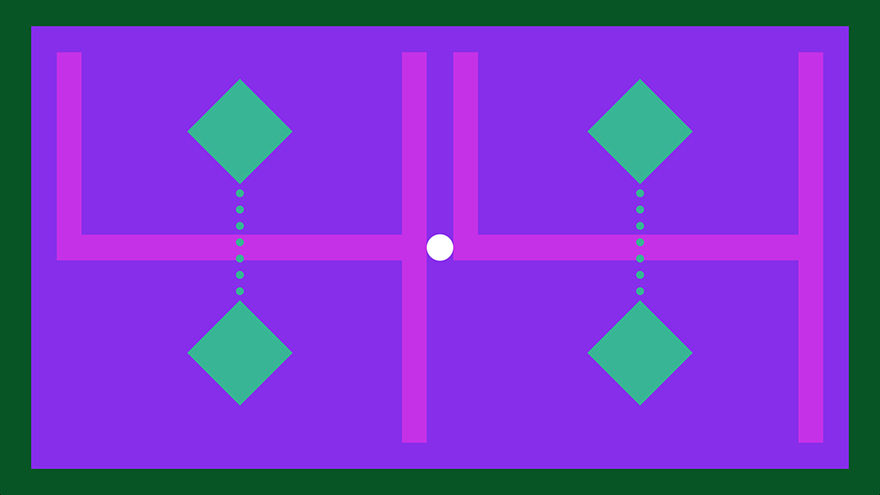 Thoth works on certain illusions. A static screenshot would make you think this twin-stick shooter is more in line with Jeppe Carlsen’s previous game—the rhythm-based, minimalist platformer 140 (2013)—or that your dot in Thoth is kettled in against mean squares that look like descendants to Geometry War’s (2003) shapes. Thoth may only have a few matted colors at a time, but it is very loud; a mouse that roars.

it invokes stages of fear

Those squares, and many other bad shapes, are 3D in a 2D world. The way they float appears more like a gelatin warble, or a figure lashing around underneath a plain-colored sheet. Those hidden corners and contours can slip out and end you suddenly. The noise they make comes from your local industrial drone-art installation. Frosted wails echoing in void spaces. They cool down when your game does, and crash back at full volume in the moment things pick up. They are cut by the clatter of your spraying bullets, which sound like mad footsteps from older arcade games. In fact, there are arcade game strands throughout, homeopathic drips—the jingle between levels has a specific Dragon’s Lair (1983) ring.

Unlike Geometry Wars or Robotron (1982)—the latter being Carlsen’s chief inspiration—Thoth is not based on chasing scores, instead it invokes stages of fear. You are not attacked by endless waves of enemies before a high score screen. You can only take one hit. Checkpoints are set three stages away from each other. Each short segment pits you against aggressors that are specifically paired to make your time with the game a cruel nightmare. The most satisfying element of this structure is that you’ll often experience the thrill of being cornered, your guns-a-blazing, stuck in your last stand and coming out on top.

Usually, each of these three sets have their own twist. Enemies generally float towards you with a slow magnetic pull, but sometimes they will have a red rover chain between them that can also kill you. Sometimes the enemies are spire-shaped, and are only able to slide side-to-side like automatic doors. Projectiles from others are rare, though some enemies will spit a cube at you when defeated. Sometimes walls of spikes will close in, or activate between kills. One will inflate itself into a massive donut after one if its friends is killed.

It is decidedly ruthless

Every enemy, when defeated, isn’t immediately out of your hair. It will leave behind an imprint; a shadow form that rips a window into some starry sky, and continue to pursue you. One of the more dire enemies demands tact when facing it as it expands perpetually, but can be beaten back into itself with a few bullets. When it’s completely destroyed, it will began to expand much faster, manifesting this time as the window to the starry void that the dead become, and having already been killed cannot be contained again. Killing enemies only makes them vengeful ghosts. I feel like there’s a joke about that somewhere.

Thoth’s main addition to the twin-stick shooter is its constant intimidation tactics. The short segments you set out to beat—64 in all—keep you aghast constantly, and you’ll learn quickly that even when things look peaceful it can mean that something deadly hasn’t shown itself to you yet. Silence is just an opportunity for a bomb to go off. This isn’t a surprising revelation considering that Carlsen was the lead puzzle designer at Playdead for Limbo (2010) and Inside. One of the earliest challenges in Limbo involved a giant, razor-thin spider falling out between the shadows of the trees and striking you down. Once you know that the beasts are out there, you approach everything with a lot more caution—Thoth has similar lessons to teach.

Being cruel makes Thoth hard, but it doesn’t necessarily make it interesting. The kind of knotted dance your fingers have to do in the similar Soft Body is more dynamic, interchanging, and captures a sense of brutal intensity without completely relying on it. The rhythmic layering of Everyday Shooter (2007), another twin-stick shooter with a strong sense of audio, uses sound and music to elevate it beyond its unrepentant mood. Thoth has a two player co-op mode, but when one player dies they transform into a shape belonging to the void as well—the most vicious of them all, in fact. Thoth isn’t here to make friends. It is decidedly ruthless and daunting, a challenge with matched aesthetics, but not a whole lot more than that.