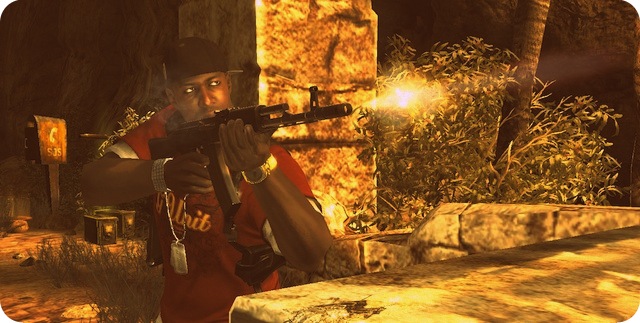 Yesterday it was announced with misgiving that THQ, the publisher responsible for completely respectable titles such as Saints Row and Darksiders 2, was folding. This was not unexpected, as the facts of the company’s fiscal woes were widely publicized. I’m not here to muckrake through the aftermath like a greedy grave robber. You can get that elsewhere. I’m here to pay tribute to a fallen great.

Like any large publisher, THQ was a purveyor of the marketable. Yearly WWE installments, plastic drawing tablets, and licensed fluff for kids were their forte. The first THQ game this games writer played was Home Alone 2 for the Super Nintendo, a bad movie and a worse game. The company was founded in 1990 by a co-founder of LJN, a publishing house known for deplorable NES games. In time, THQ would add respectable properties to their portfolio alongside the Bratz and Hello Kitty fare. These were core games that garnered good reviews from core critics; your Red Factions, MotoGPs, Darksiders, Warhammers.

Some of THQ’s most beloved titles weren’t necessarily “good” games. 50 Cent: Blood on the Sand received middling scores and just a 71 average on Metacritic, but to those in the know, the game was incredibly fun. According to Drew Millard, a former Kill Screen writer turned music critic at Noisey,

Blood on the Sand was such an amazing game because it quite literally put you in a 50 Cent song. Killing terrorists. With gigantic guns. There was a button that let you scream the word “Fuck.” It took a look in 50 Cent’s cold, dead eyes, and reflected exactly what it saw.

50 Cent was a paragon of THQ’s library. Here is a game that technically wasn’t good enough to be picked up by an Electronic Arts or Take-Two, but was way more fun than it had any right to be. THQ traded in the kind of software that lacked the gloss, and didn’t take itself too seriously, but was plainly, simply fun.

It could be speculated that the pressure to produce bigger, better games is ultimately what did THQ in. There is plenty of talk in the industry about how games with middle-tier budgets are being eroded on both sides by games with astronomical allowances, like Call of Duty, and small PC and mobile games that are cheaper to make. With the demise of THQ, it sure looks like this is the way things are headed. THQ’s more popular properties are being divvied up by other publishers as you read this. This may result in shinier, flashier titles that aren’t as enjoyable. The less popular franchises may disappear.

Risk aversion was the real value of the market space THQ occupied, but after the economic collapse of the aughts, even that space was risky. In it’s final year, THQ was forced to back out of publishing deals for some of the most highly anticipated titles in all of gaming. Pan’s Labyrinth director Guillermo del Toro was stranded without a publisher for what was to be his first game due to THQ’s solvency issues. The status of the long-awaited Devil’s Third by Ninja Gaiden director Tomonobu Itagaki is left in limbo. The first-person shooter Metro: Last Light, made in collaboration with the Russian sci-fi author Dmitry A. Glukhovsky, will be published elsewhere.

The best days were ahead for THQ, but no more.