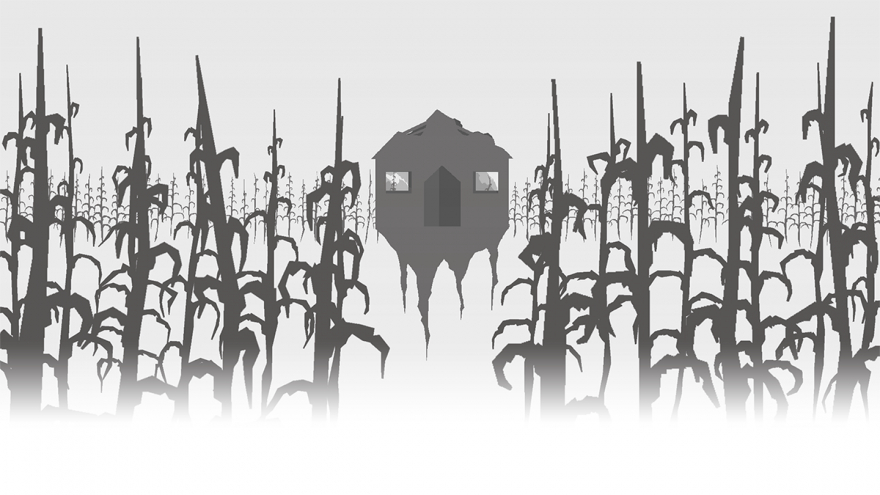 [This article contains some spoilers for Three Fourths Home]

“How does this game know me?” is a question I was forced to ask myself. Three Fourths Home may take place amid the flat fields of rustling cornstalks in , but that didn’t stop it feeling strangely close to home.

It’s a text adventure with a stylish wrapper. As Kelly (mid-20s, like me), you drive nonchalantly homewards across the scenic farmlands of the American mid-west, unwisely talking to a concerned mother on the phone at the same time. It operates like a phantom-sequel to Glitchhikers. You’ve done the casual cruise to your dilapidated grandparents’s house (where it hovers in the air with the earths roots hanging from its foundation), thought about the universe, and analyzed inwardly. Now you’re rushing home (“but not too fast”, as your brother reminds you) to your family, back to reality.

Three Fourths Home meets us at that chaotic intersection in life.

Unfortunately, there’s a thunderstorm coming and, well, I knew it before even playing the game, as early as seeing “Sad” as the default graphics settings—this isn’t going to end well. Conclusion aside, it’s the narrative exposition that has glued itself between the follicles of my memories.

Most of it has you talking politics, responsibility, and nostalgia with Kelly’s complicated family. You can fiddle with the headlights to release the nervous energy during the more grating discussions. I found that turning the tape deck off (a satisfying clunk), forcing myself to listen to the harsh slashing of the rain, while confronting dad with his alcohol problem, to be comforting. You don’t have to do this; you shape Kelly’s relationship with her faceless family through a number of conversational choices.

It was in discussing how Kelly had moved back home after a failed attempt to escape her native countryside, and bad talking her lazy father with her mother, that caused me to become suspect of creator [bracket]games of having stalked me. My life was being told back to me as part of a fiction, as if it was a lie, and I would suddenly awaken from a 25-year-long dream. Perhaps it wasn’t just a scary coincidence.

It might be that it’s the common story of a generation. Kids growing up being told they can have everything if they work for it (“just get through college”, my own mother would innocently beg), are slapped about the face with rising house prices and depressing bouts of unemployment as soon as they step out the front door. The average age of failed fledglings living at home with mom and pops is, apparently, 27 years old these days. Family matters cannot be escaped. Your old bedroom mocks you as you sleep inside it. Sometimes we get fed up and have to drive for miles at a time, alone, in order to meditate.

Three Fourths Home meets us at that chaotic intersection in life. It’s between the longing past and uncertain future, somehow still on the fringes of teenage despair, not yet fully taking on the burden of adulthood. Parents argue about each other’s health and the unknowingly hurtful words of little brothers bring us to tears. For moments at a time you fluctuate between loving them and hating them. Then it all comes crashing down during a torrential storm; nothing else matters but them. Your mom’s voice breaks up on the other end of the phone…

The phone’s tone suddenly changes to that of a flatline heart rate monitor. Did you even say goodbye?

You can purchase Three Fourths Home on the Humble Store as well as itch.io.