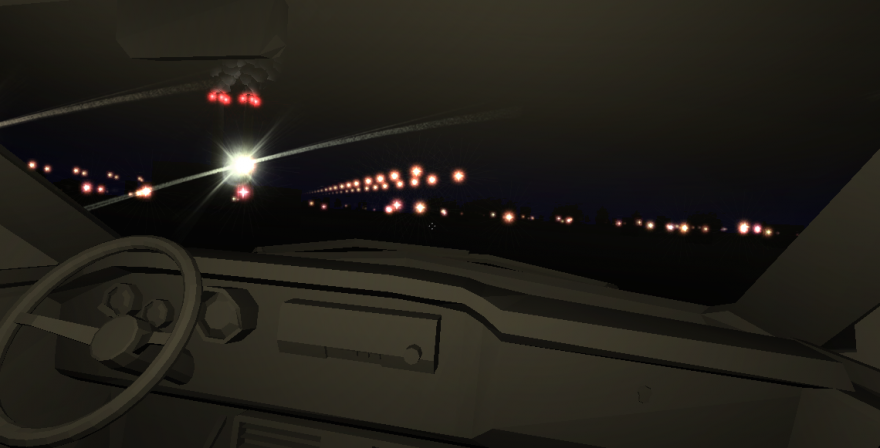 I used to call The Tiny Bang Story my “lullaby game” on account of its reliability in sending me to sleep at my desk in the late hours of the night. It’s a gentle, soothing hidden object game with hand-painted artwork that you can complete in less than an hour.

I used to deliberately put it on while I was feeling dozy in order to put myself to sleep with a smile (I used to struggle to nod off and, sometimes, still do). Its soundtrack was the main culprit in this somnial ritual. Seriously, listen to this—it’s music that’s meant to be slept to.

its only graphics option is “drowsy.”

Nowadays, I tend to read a book to put myself to sleep. Although, sometimes I have been known to vouch for the more traditional snoozing while watching a film in bed. That can be annoying, though, especially when you subconsciously listen to the same 30-second DVD menu singing to itself all night.

But, every now and then, I do come across a videogame that I’d classify as apt for putting myself to sleep with. Below are three of the more recent ones I’ve snuggled up next to. Perhaps you could try it out, too.

We’ve all been there. It’s late, you’re on the road, and all you want to do is sleep. But you can’t. You’re still driving. Ugh.

Night tune is a game that wants to transport you to that irritating situation, but voluntarily, so that you can finally fulfill the fantasy of actually sleeping when you can’t (without causing a car crash). This is why its only graphics option is “drowsy.”

It places you in the passenger seat of a car. It’s dark outside. Hazy city lights peer in at your half-closed eyes. When looking at the car’s dashboard, a hand icon pops up, indicating that you can interact with the cassette player. Clicking it brings up your computer’s files so that you can select your favorite music track.

Once the song starts playing, all you need to do to finish off this ceremony is to switch off the overhead light. Your head sways, drunkenly, the orbs of light blur, and the bass of the song is buzzed up to complete this vehicular oneirism. 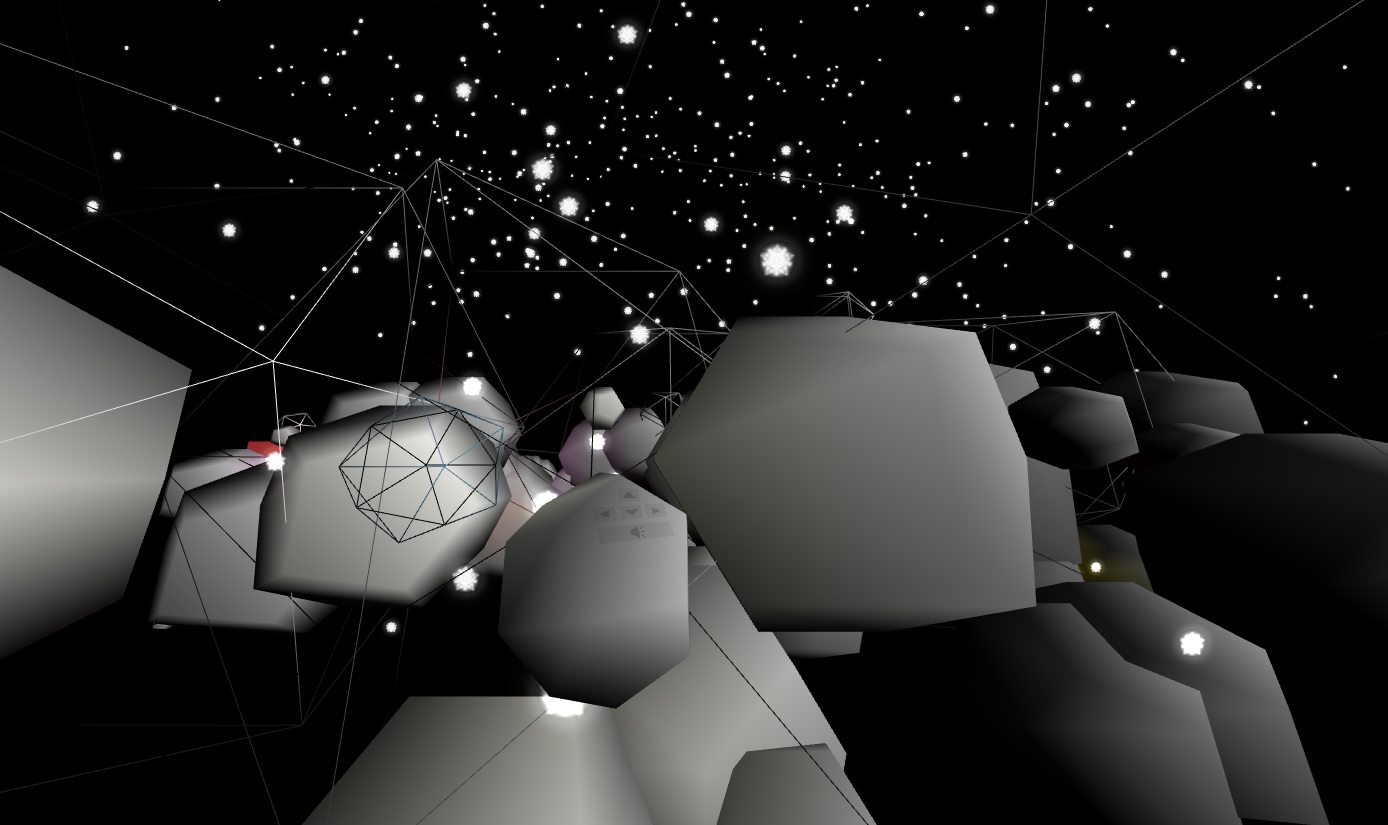 Key to a “lullaby game” is a low level of interactivity and a serene soundscape. EleVR’s Child has both. The music was made first, with its collection of asteroids and traced geometry being added afterwards to provide a space interesting enough to fly around, but not detracting from the sounds.

As said, the interaction is low-key. You drift around, twisting and turning, and nothing more. Its creators says that the interaction “exists just for the purpose of triggering sound events while having the space change to reflect the appropriate mood.” The result is as if you’ve fallen into an outer space soup; boulders as croutons, the stars as blemishes in the hot gloop.

Your only encouragement toward anything comes from the reactions of the soundtrack. It’ll send out chords that shimmer softly according to your position. Occasionally, colored lights will appear to further set the mood. It requires only that you dawdle and it will reciprocate with its space choir. 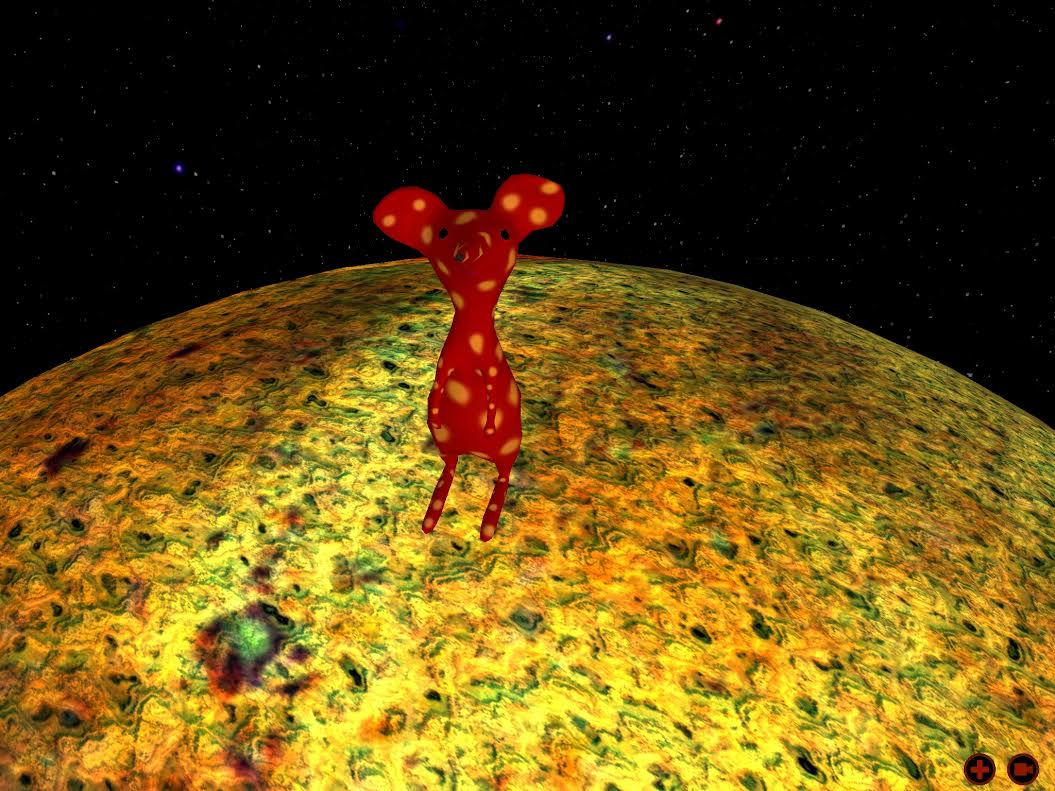 We’re in space again, but this time we have a friend, sorta. Hovilig is a pet simulator, except your pet doesn’t always care for your company.

Hovilig, that yellow-spotted red kanga-mouse up there, might as well be one of the Clangers. It talks to you through its own musical language and body gestures—turning its head, hopping around, vibrating with giggles. You can talk back by tickling its belly, or pulling on its floppy ears, or strumming out notes on the large leaves of the planet’s only tree.

But the plesantries of musical communication won’t last long. Hovilig doesn’t need you to look after it. And so, if you hang around for too long, it will snap, and push your view through the camera into the depths of the universe. Keep up being an agitating overseer and you’ll soon run out of cameras to switch to.

This may not sound like an appropriate game for going to sleep to. But it depends on how you play it. If you’re a cat owner, you’ll know that all affection has a limit, you just have to learn to recognize when to stop. The same goes for Hovilig: play music with the little space mouse, enjoy the tickles, and go to sleep happy. But outstay your welcome and you’ll quickly be exiled.