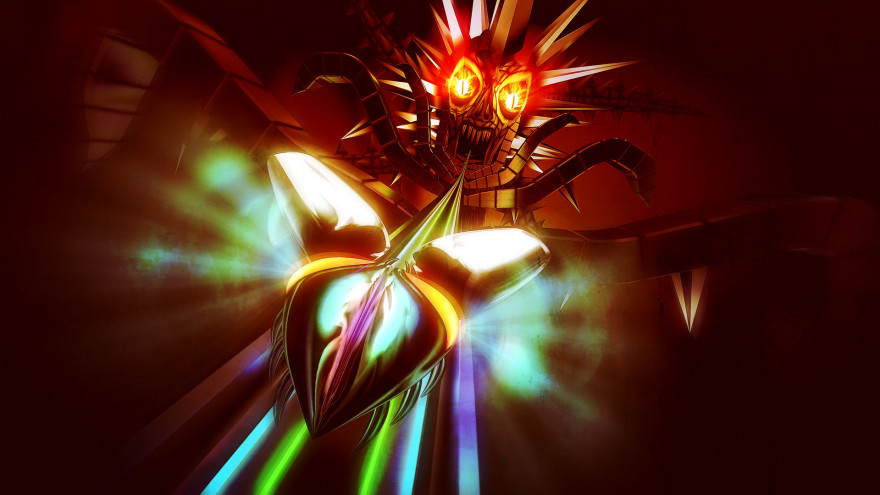 Thumper is so fast. Like, holy shit, not even my eyes can keep up with whatever’s going on in the new trailer—how are my thumbs supposed to? This trailer, as you can watch below, is one minute of totally uninterrupted footage of Thumper at its more advanced stages. It’s like pushing your face up against a passing train. What you should be able to see is a chrome-coated space beetle grinding arse-ways against corners, hopping and fluttering above obstacles, and occasionally switching lanes. But what you might only be able to see is a light show moving at 1000 mph.

This whole game is wild. It looks like the cover art for a progressive rock album electrified to life with giant, Dr. Frankenstein-style tesla coils. It sounds like an aggressive band of robots accelerating their instruments toward hyperspeed. It’s a rhythm game made of metal, one that thrashes about at every beat, hanging on to the edge of the world as it shreds a course around it. This, we have been told, is “rhythm violence.”

DROOL, the studio making Thumper, has led with this idea of bringing violence to the rhythm game genre for a couple of years now. It’s the two founders’ defiant breakaway from the safe strumming and party hopping that they worked on previously at Harmonix—on titles like Guitar Hero, Rock Band, and Dance Central. One of the founders, Brian Gibson, seems to be tapping into the loud, searing noise rock of his longtime band Lighting Bolt with Thumper. Marc Flury, the other founder, is the one putting the nuts and bolts on this monster. Together, they’re making a game about a beetle blitzing its way towards its nemesis; a giant, floating, maniacal skull called Crakhed. It seems it was only a matter of time before they confessed that they were taking us to hell.

“That game is going to kill people.”

For that is how Thumper is now being presented—”Thumper will Drag you to Rhythm Hell” is its latest promise. But it isn’t the only game taking us to hell this year. Last month saw the arrival of Devil Daggers, which envisions hell as an abyssal arena that fills fast with flocks of demonic, cackling skulls and bony, flying centipedes. Then there’s DOOM, due out this May, which as its latest trailer shows us, will reboot the classic shooter as it should be: bloody-fisted, full of muscular demons, and fast as hell. Together, these three videogames are bringing us a united vision of hell, one defined by its speed and immediate violence more than anything else. There’s no pissing around here.

But of these three games it’s Thumper that’s daring us to shove our face ever closer to the underworld. Yep, the damn thing is coming to PlayStation VR. “We’ve spent the past few years making Thumper the most intense two-dimensional experience possible. Wouldn’t a VR version just be too intense?” so says DROOL. “Well, we can confirm that not only is it intense, it’s completely overwhelming!” Yeah, I bet it is. Goddamn.

My editor put it best upon seeing the new Thumper trailer and hearing that it would be coming to PlayStation VR. “That is an irresponsible use of virtual reality,” he said. “That game is going to kill people.”

Get prepared for your death-by-screen as Thumper will be out for Steam and PlayStation 4 later this year. Check out more on its website.