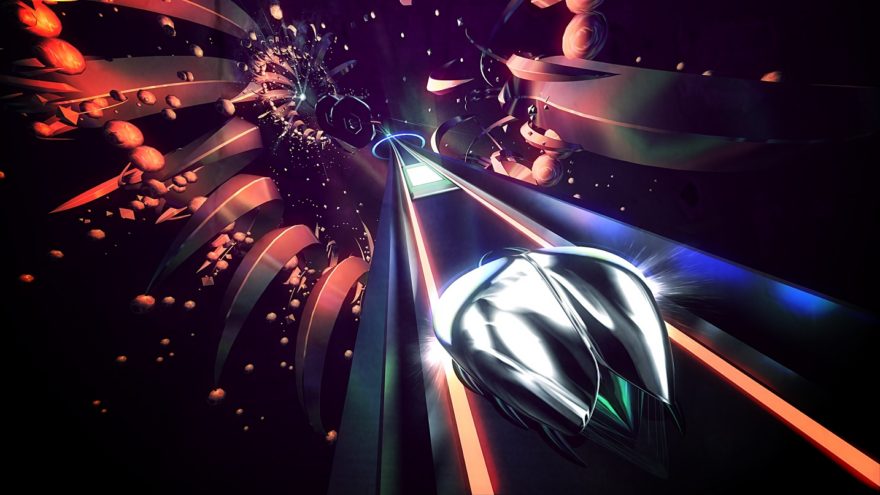 I’ve only been to one Lightning Bolt concert in my life, but it left a serious impression on me. The band—comprised of duo Brian Gibson on bass and Brian Chippendale on drums and vocals—set up their gear on the floor in front of the stage with a stacked wall of amps behind them. The music is loud and fast, a flurry of noise-metal bass churn, blistering drum rhythms, and distorted, indecipherable shouts. The crowd was a compact mass of bodies, not so much a mosh pit as a sweaty blob fighting against the shape of its container. There was no concrete line separating audience from performer; the band in perpetual risk of being swallowed whole by the undulating pool of fans. The spot right in front of the drum kit is the most intense—whoever is there has arguably the best view of the show in the venue, but they’re also the most at risk of getting shoved into a swirling drumstick.

In addition to playing bass in Lightning Bolt, Brian Gibson has also worked as an artist on several tentpole music games over the years, including Guitar Hero (2005) and Rock Band (2007). Since then, he’s formed his own studio, Drool, with ex-Harmonix programmer and designer Marc Flury. It’s fitting, then, that for a good chunk of Drool’s debut game, Thumper, I felt like I was the one teetering over that Lightning Bolt drum set, barely retaining composure against a relentlessly applied pressure. In Thumper, you control a chrome scarab careening down an endless twisting highway (basically the album cover of Journey’s Escape as a videogame). Like many rhythm games, Thumper asks players to tap a button in time with onscreen cues, limiting the complexity of possible maneuvers to one button, plus one of four cardinal directions on the thumbstick. But don’t let the simplicity fool you. Thumper makes up the difference with menacing timing, an intolerance for failure, and a degree of graphical distraction that will obliterate most players on their first time through.

In playing Thumper, you’re ostensibly flying through 2001: A Space Odyssey’s (1968) Star Gate scene, though if that’s the case then it seems to have been distorted by DOOM’s hellworld. The landscape is a red void, inhabited by the floating skull demon that concludes each level, and a host of starfish fractals that erect obstacles along the way. There’s a cold distance to the game’s overall aesthetic, which makes it all the more arresting when so much of it is right in your face. You’re able to execute “Perfect Turns” by flicking the thumbstick in the direction of the outgoing path just before slamming your body against the wall. There are moments when you’ll see a turn pop up on the spindly path ahead, seeming to offer plenty of space to ready your timing and execute a maneuver. Just as often though, the distance induces anxiety as you struggle to find the correct rhythm in the lead up. For all the reflective surfaces, hollow tubes, and endless expanses, the feeling of playing Thumper can be quite imposing and claustrophobic.

Thumper is a trial by fire, or explosive chrome, as it were—there is no “Easy” mode or free-run practice area. This extends to the music of Thumper, which eschews four-on-the-floor bangers and even the frenetic-yet-metered patterns of jungle or drum and bass you’re likely to find in many rhythm games. Instead, the soundtrack is spartan cascades of power kit drum beats, as if you ripped the rhythm track out of an action movie trailer and set it to loop. There are patterns, but in many cases they aren’t apparent unless you hit all of your marks. This means you can’t feel your way through stages by matching the beat; you have to create an additional drum fill that compliments the backing track. This was one of the trickier aspects of Thumper to wrap my head around, as it’s such a divergence from the way most rhythm games function.

As such, I struggled with the middle half of the game (there are nine levels total). The difficulty spikes early on and my scores quickly dove from alternating As and Bs to consistent Cs. The tracks become unpredictable and near impossible to execute without taking hits and dying in an effort to learn the patterns of turns and thumps necessary to clear a stage. Quick turns in tunnels seem downright unfair for those looking to sail through levels on their first attempt. There might not be a Sword of Damocles looming overhead in Thumper, but there are hundreds of tiny guillotines lying in wait to decapitate you at a moment’s notice. There are times where the game is on the verge of becoming a slog.

I just had to learn how to listen to it

However, upon reaching level six, I started to better recognize the game’s patterns and curveballs, even clearing a few stages on my first try. All of a sudden, deaths seemed less the game’s fault than my own. I went back and played levels I struggled with before and breezed through them with only a handful of fatal errors. It’s not a rare thing to get better at a game with more practice, but it’s worth noting in regards to Thumper for fear that the intense difficulty might be taken as bad design. The truth is the contrary. Thumper is less unfair than it is uncompromising, and feels right in line with the recent crop of run-based, arcade-style games (e.g. Spelunky and Furi) where the progress is incremental and the deaths are many. The struggle not only makes the payoff of slick execution in Thumper quite satisfying, but it’s also revelatory. It turns out the game was telling me everything I needed to know, I just had to learn how to listen to it.

Thumper is a remarkably physical experience despite the fact that you control it with such modest thumb gestures. Other music games have supported the more complex movements of full-body dancing and complete band simulations via plastic instruments. So, at first glance, Thumper appears to be a return to the simpler days of Amplitude (2003) and Frequency (2001). However, unlike those games, which felt like they were better suited to being played with an MPC than a gamepad, Thumper’s controls feel uncompromisingly situational. There is no scale recognition, only movement prompts, and the basic controls reinforce this. Notes have been replaced with actions: thump, slam, grind, launch, etc. And each of those actions comes with an onomatopoeia-ready sound effect that illustrates them in a pronounced fashion. The reverberating “BOOooOOoom” of bass rumbling after landing a stomp at the end of a jump is particularly satisfying, but my favorite is the knife sharpening “SHHHHHHINK” when you simply hold “Up” on the thumbstick to open the beetle’s wings at the correct time. It makes me want to go listen to Photek. 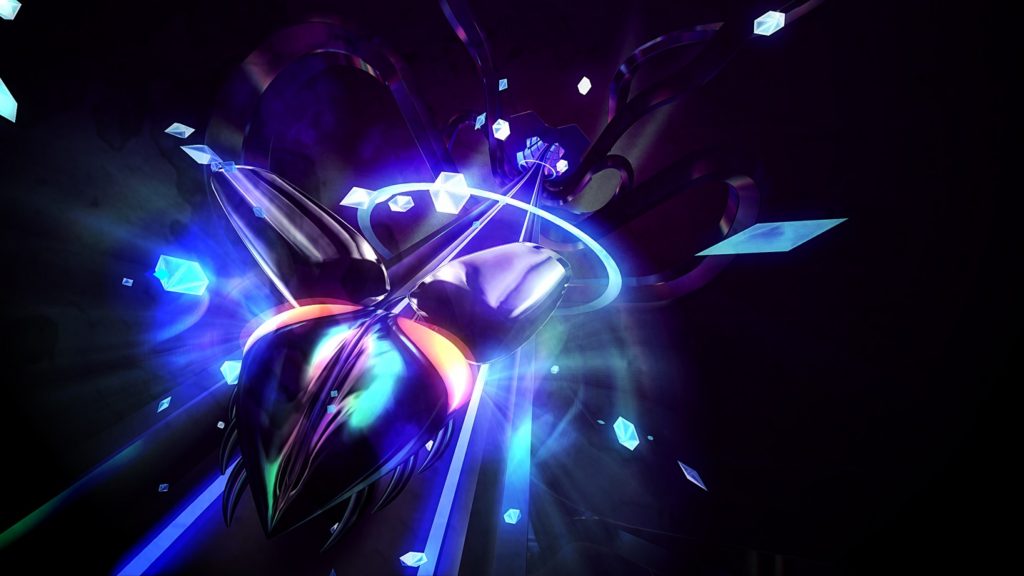 I might have started off playing Thumper bracing myself from falling on Lightning Bolt’s cymbals and toms, but by the end I felt like the one holding the drumsticks. There’s something to be said for the sensation of Thumper’s mid-game, where survival is the goal, ignorant of whatever score comes along with it. You’re the audience member just holding it together long enough to see the show. But to truly feel in control of Thumper is to feed off of a kind of daredevil bliss. When you can see through the frenzy and begin playing with restraint, you might not feel like a musician, but you do feel like a performer worthy of an audience. Thumper doesn’t come with a wall of amps and heaving waves of bodies crashing all around you, but it does successfully channel that sensation all the same.