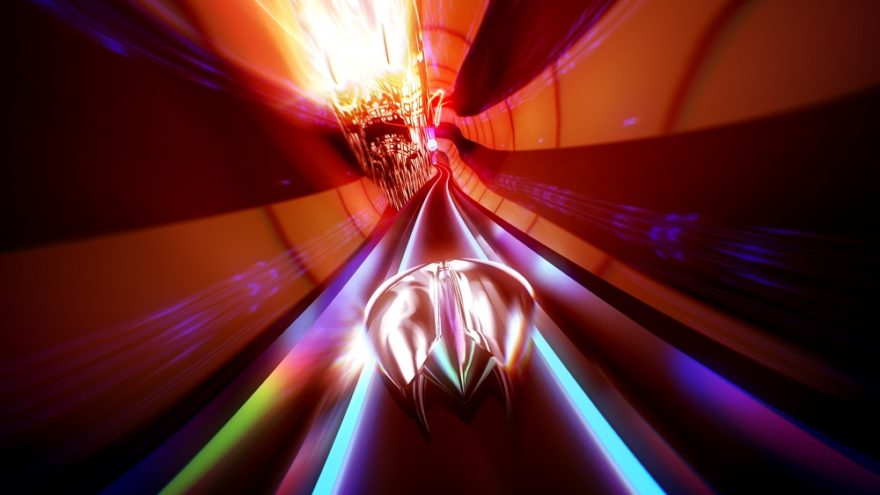 Thumper may not be the first rhythm game to feature a craft accelerating down winding paths in sync with the beat, but its aggressive assault of color and sound and speed promises to perhaps be the most hypnotic. The intense and otherworldly  “rhythm violence” of the game has been gestating since developer Drool formed in 2009, and now, like its titular chrome beetle, is finally set to emerge on October 13th for PlayStation 4, PlayStation VR, and Steam.

“an overwhelming sense of speed and monumental dread”

In a recent PlayStation blog post, co-founder Marc Flury discussed what you should expect when the beetle lands and begins grinding its way into your life. Aside from the game itself, the pounding soundtrack that your beetle shreds along through the game’s vivid soundscapes will be released on a collector’s edition vinyl album designed by artist Robert Beatty.

The relentless speed and looming metal leviathans have only grown faster and more imposing since we last saw Thumper in March—Flury touts how the game’s improved movement, grander scale, and more polished effects have now coalesced to “create an overwhelming sense of speed and monumental dread.” One can only imagine the intensity of these refined tracks when experienced through VR, especially as Thumper has already proven to be a game of near-unmatched frenetic speed and bombastic style.


This is why it is somewhat surprising when Flury promises there’s more of Thumper‘s grind-and-slam approach to rhythm matching and its hellish worlds—that twist and roar to the music—to be revealed in the coming months leading up to the game’s arrvial.

Prepare your eyes and ears for Thumper on PS4, PSVR, and Steam. More details on the game and Drool can be found on their website.