In 1993, LucasArts released Star Wars: X-Wing, a space flight simulator that let the player fly as part of the Rebel Alliance in missions focused on ambushing Imperial forces and gathering intelligence. The game received near universal critical acclaim for its authenticity as both a window into the Star Wars universe and as a flight simulator that reproduced in excruciating detail the difficulty of piloting for the Rebel Alliance. In X-Wing, nearly every button on the keyboard serves a purpose, from shield and energy management to changing cockpit viewpoints, making the dogfights a careful balance of ship maintenance and white-knuckled shooting. The game did, however, have a few rough edges indicative of the studio’s inexperience with flight simulators, the ships sometimes handling clumsily or chasing objectives that could only be fully understood after multiple failures. It makes sense, at least in retrospect, to think of these rather insignificant stumbles as part of the Rebel Alliance’s own sloppiness of sending groups of ragtag freedom fighters against a colossal military outfit; the game carries a sense of underdog charm in the Alliance’s guerilla strikes against the Empire.

LucasArts rectified many of these small quibbles a year later with the release of Star Wars: TIE Fighter, a more polished title with better resolution, improved sound, and sharper AI. More importantly, the game presented the first instance in Star Wars history where the perspective shifted from the story of the noble Rebels to the machinations of the evil Empire. The player steps into the flight boots of Maarek Stele, a character named only in a supplemental booklet (and later official strategy guide), who pilots various ships for the Imperial Navy on missions that range from repelling Rebel attacks and securing new technologies to intervening in a civil war and rooting out Imperial traitors. The focus on maintaining the Empire’s seat of power gives TIE Fighter a much grander scope than X-Wing, which, again, makes a certain amount of sense, considering the Empire’s expansive control and vast resources. As an Imperial pilot, I rarely felt like more than a drone sent to repair the occasional hitch in the Empire’s political machinery, working to keep the Empire from running at maximum efficiency. As a result, TIE Fighter inadvertently becomes a game as much about the functional aspects of fascism as it is about tense dogfights and galactic conflict.

TIE Fighter begins after the Rebels’ evacuation of their base on Hoth in Empire Strikes Back. The iconic Star Wars text crawl cascades across the screen, only here John Williams’ “The Imperial March” provides the score and the language of the text is replete with hyper-nationalistic spin. Explaining how “Rebel terrorists … struck a cowardly blow at the new symbol of Imperial power” with the destruction of the Death Star, the text lauds Darth Vader’s commitment to “swift justice” and the Empire’s mission “to eradicate rebellion and restore law and order to the galaxy.” The association of the Empire with fascist regimes like Nazism has always been clear, from the officers’ uniforms and regalia to the actual name of their troops as “stormtroopers,” but TIE Fighter reproduces directly the language of nationalist propaganda. The game continues with a speech from Emperor Palpatine that explains how the Empire is “on the verge of success” despite the destruction of the Death Star and the botched Imperial assault on Hoth. 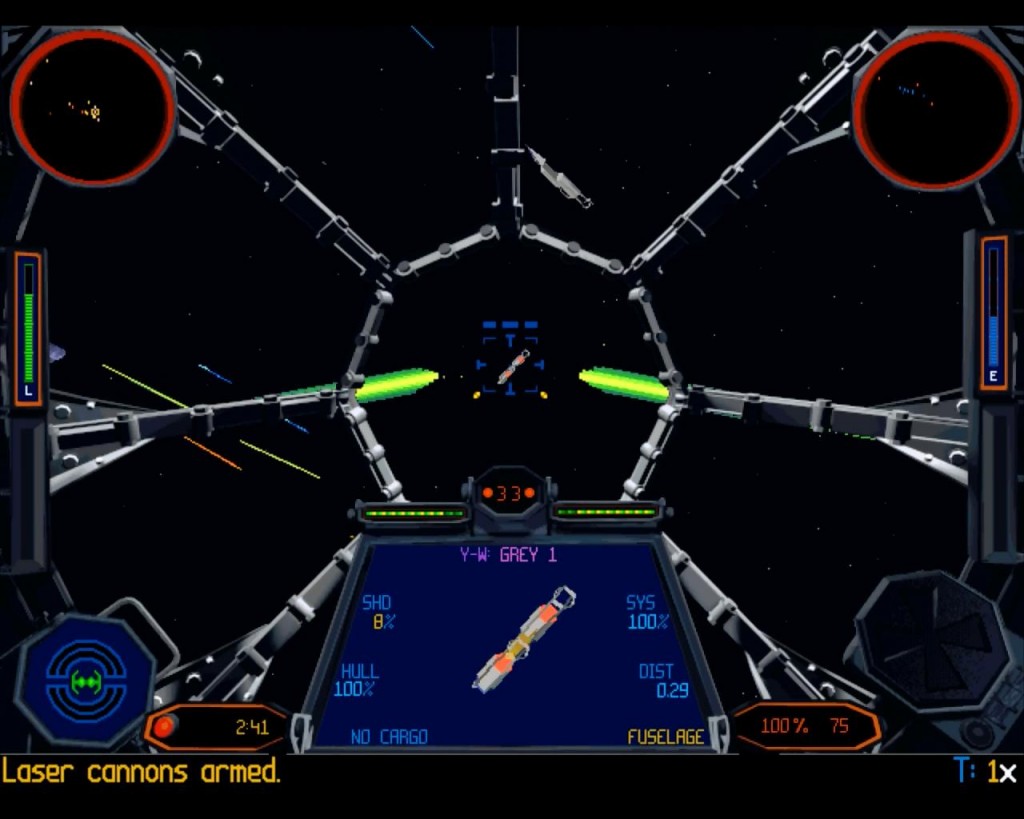 This language mimics the nationalist rhetoric circulating across Italy and Germany that gave rise to fascist ideologies in the wake of World War I. Adolf Hitler famously detailed his philosophy of propaganda in Mein Kampf, explaining that “the art of propaganda consists precisely in being able to awaken the imagination of the public through an appeal to their feelings” in order to reach “the broad masses of the people.” Believing in the power of repetition and the gullibility of the crowd, the Empire wields information as deftly as it does its military branch, promising a galaxy of peace and order while downplaying the threat of the Rebel Alliance. TIE Fighter’s glimpse into the rhetorical strategies of the Empire shows a side of the Star Wars conflict beyond the dynamic battles and simple political narrative of the films to convince the player of the virtues of Imperial ideals.

Political language, of course, comes secondary to the actual operations of the Imperial navy. Here, TIE Fighter borrows more from Benito Mussolini’s Italian fascism than from Nazi propaganda. While the Emperor bandies words in the political arena, the Empire’s military adheres more closely to Mussolini’s dictum in “The Doctrine of Fascism” that “War alone … puts the stamp of nobility upon the people.” Mussolini calls for national unification by abdicating the indulgences of individuality in favor of “the State as an absolute.” Likewise, pilots in TIE Fighter are indeed rewarded for their success, but their objectives always inform a connection to the Empire’s cause, foregrounding the importance of the Imperial progress rather than individual accomplishments. Here again, TIE Fighter elucidates a more complex picture of the Empire—one that promotes collective order and efficiency as pathways to peace.

the player strives all the harder for recognition

Much like the fascist ideals that inspired the Empire of Star Wars, such philosophies often came at the expense of the people fighting for them. Consider, for instance, the disposable simplicity of the TIE Fighter. Essentially a shieldless cockpit held precariously between two tall hexagonal wings, the Twin Ion Engine starfighter serves as an example of the philosophy driving the Imperial war machine: victory by overwhelming force. Mass-production forms the technological backbone of the Empire’s war efforts; consequently, the TIE Fighter’s effectiveness comes not from its individual power but from its inclusion in a swarm of other fighters, each as expendable as next. The Imperial navy reduces the complexities of war to ruthless calculus, a game of numbers winnable by amassing the largest fleet.

For the player of TIE Fighter, however, being a faceless pilot in a swarm makes any personal victory all the more satisfying. Piloting a fragile, cheap ship forces the player to prioritize evasive actions instead of aggressive force, and as a new recruit, the player must prove herself by completing missions in the TIE Fighter, TIE Bomber, and TIE Intercepter. While X-Wing begins with the player piloting a shielded craft, TIE Fighter makes the Empire’s value of the player clear by withholding the more heavily-armored Assault Gunboat until the player can survive her first few missions. As the game progresses, the Empire invests in more specialized craft like the TIE Advanced (later named TIE Avenger), and the TIE Defender—but only after the player secures the supplies and intelligence required to develop them. The stakes of the missions, too, increase in complexity as the player progresses, beginning with simple bureaucratic inspections until the player eventually flies in formation with Darth Vader or rescues Emperor Palpatine from a traitorous kidnapping plot.

This mission and equipment escalation proves to be the game’s masterstroke. Even as the Empire upholds the concept of unity by diminishing the worth of the individual, the player strives all the harder for recognition. The faceless and voiceless protagonist of TIE Fighter may believe fervently in the Empire’s goal of peace through order, but games as a whole (and certainly the games of the early and mid-nineties) insist on the player’s importance as an individual, reinforcing her worth through rewards. In the beginning of the game, the Empire expects the player to fail, to die as one of the swarming pilots crashing against the Alliance in hopes of overwhelming them. Only through skillful flying can the player survive long enough to gain the recognition she deserves as one of the Imperial navy’s top pilots—a victory assured through the sheer number of pilots still speeding headlong into the fray, ready to die for the ideals of an uncaring Empire.

That drive to become a key component in the Empire is what I remember most about TIE Fighter when I first played it over two decades ago. Though I enjoyed X-Wing, flying under the Imperial insignia was far more engrossing, beyond the novelty of flying for the enemy every other piece of Star Wars media told me to hate. There exists an undeniable clarity to the Empire’s mission, despite the dehumanizing, mechanical political ideologies that inspired it. Admittedly, I have become recently troubled by the game’s seductive reveal of the Empire’s reliance on propaganda and the ruthless disposability of its pilots, and I would wager that the game wants the player, to some degree, to embrace and interrogate the values that drive many of the mission objectives. In fact, I’m sure of it—just as sure as I am that damn near any cause could seem noble to someone willing to be swayed by some clever rhetoric and a show of power.