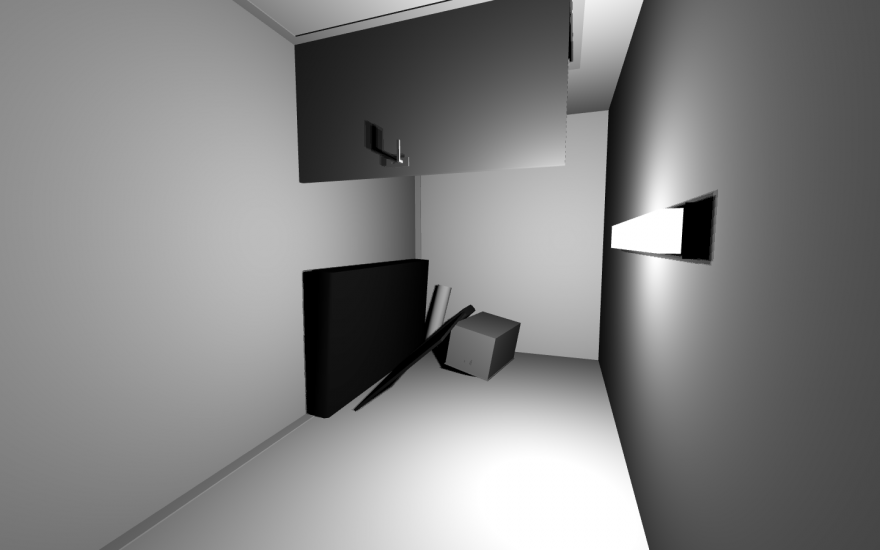 A room enclosed on all sides sits naked in grayspace. Inside is a trunk, a bed, a tube, a radiator, a light, and little else. A sharp sound swells and suddenly the room snaps out of place. Now it is upside-down. You can’t even enter through the open doorway, barely able to peer inside through the window, the objects once sat neatly now thrown into disarray across a ceiling that is now a floor. The sound comes again and the room changes, again. It sits as it did before, at the center of a square cut of rock floating in a void, but now a duplicate of the room slumps on one of its corners at a diagonal like a schoolyard bully pinning down their victim. At the next swell and switch you are returned to a single room; this time it has abandoned the floor and hangs above you in a brutal pose, suspended in emptiness.

To understand Pippin Barr’s latest project, titled v r 1, it is best to know where it came from. Barr’s fidgeting digital room, which dissembles and rebuilds itself a number of times, is a duplicate of “u r 1,” which is a single room located in Gregor Schneider’s childhood home in Rheydt, Germany. It is said that inside that house there is another room with no door handle on its inside, and only a decorative knob on the other side—if the door is shut, the person inside is trapped forever. This is only believable because Schneider has, since the age of 16 when his father died, relentlessly re-renovated and reconfigured his home into a claustrophobic maze of crawlspaces, fake partitions, and dark corridors. Rooms are built inside rooms, colored lights suggest different times of day throughout the interior, and in the cramped and dank basement there is a noticeably incongruous disco ball hanging from the low ceiling.

It is unknown as to why Schneider was compelled to this project now known as “Totes Haus u r” (Dead House u r), but many have perceived it as a result of trauma; his father’s death playing on his mind and manifesting as a psycho-architectural passion. That is conjecture, and in any case, Schneider has a keen interest in Expressionist art, fascinated especially with more morbid works during his younger years that involved screaming human faces and auto-mutilation (the urban legend of John Fare is an example of his taste). And so what some see in “Totes Haus u r” is a transformation of Schneider’s interests into interior design—it’s this that has attracted museum and art curators to his home.

If you disregard the accusations of perceptual disorder and mental unrest, Schneider’s work and vision becomes wholly artistic.  Daniel Bimbaum, who visited Schneider’s house and interviewed him in 2000 for ArtForum, provides insight on the German artist’s chief interest: “He is interested above all in forms of existence that escape perception—substances, spaces, objects, and qualities that remain hidden. When one wall is built in front of another, a space is created between the two. […] The invisible works are just as significant as the visible ones to Schneider, and the very distinction between the two might be of minor importance to him.”

the uncanny and creepy effects of Schneider’s room configurations

The suggestion is that Schneider is actively testing our boundaries, quite literally pushing and shifting them to see how we, in our physical bodies, are affected by different forms of architecture. Navigating his home requires squeezing through gaps and crawling through muck, but perhaps more importantly, a lot of the spaces are inaccessible as they are hidden behind newer walls or barricaded by concrete. The Guardian‘s Jessica Lack adds to this that our fascination with the house “reveals how compelling we find the most disquieting aspects of the human condition.” She doesn’t see only a house but a metaphor for the interlocking parts of our psyche, going so far as to seeing Schneider’s basement as alluding to the nefarious under-house nightmares of Fred West and Josef Fritzl. The spaces hidden by layers of walling are the parts of our mind we lock away if this interpretation is to be carried further.

With v r 1, Barr hoped to replicate Schneider’s cluttered interior space in a virtual environment, and to see how digital architectural tools grant further experimentation. “I was most interested in seeing how creating doubled spaces differs in a virtual setting,” Barr writes, “notably the idea that doubling is trivial in this context, amounting to nothing more complex or laborious than ‘cut and paste’.” The goal was to achieve the uncanny and creepy effects of Schneider’s room configurations but the minimized labor means wilder restructuring was required—placing a room inside a room isn’t as impressive in a virtual context as it is in a cramped house next to an industrial complex in Germany.

Barr’s best efforts come when he lets the room forget its orderliness. While upside-down, its contents sprawled in the heap they fell into, it seems as if a sleeping man has angrily tossed over to rest on a more comfortable side, or, more grotesquely, they resemble the collapsed organs of a retired body. The room takes on a menacing quality when hanging over you; a beastly monolith suddenly woken from its slumber due to a human opening a cavity inside it to use as a home. A personal favorite, though not particularly unsettling, is when the room arranges its walls and objects in a neat line from tallest to shortest across the ground. It’s reminiscent of how flat pack furniture is sold in parts to be screwed together. In this occasion, it acts as a reminder that every wall, every brick, every object placed in a room is given meaning through our perception of it. Seeing each wall panel as an individual object breaks the illusion that the virtual room has agency or personality of its own, not even when it is constructed as part of a living space—all meaning and purpose is of our own projection.

Schneider was met with controversy in 2008 upon saying that he wanted to build a space in a museum that people could die in. His reason wasn’t for gruesome display but so that people had the option to die somewhere beautiful rather than be subjected to the clinical tones of a hospital room. He wants to subvert the customs that have grown as to how we use and inhabit architecture and home spaces. Barr’s project ventures into the same territory but has us turn our attention to the virtual equivalent and the vast potential it has to exist beyond their human trappings, exemplified by four walls joined at the corners, crowned by a ceiling.