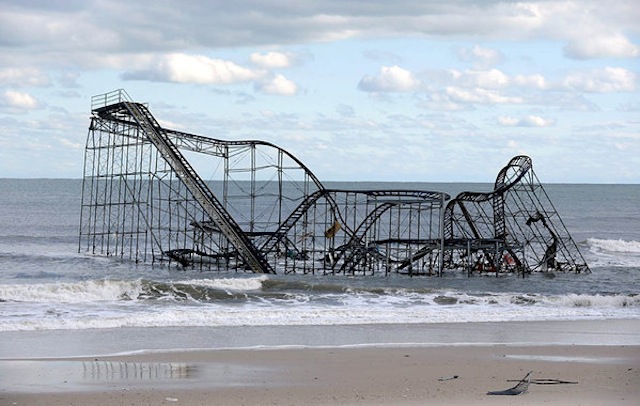 by Jamin Warren
@JaminWar
There was a hurricane last week.

And last Friday, Jason Kottke, apparently tired of the posting of superfluous nonsense, decided to do something about it:

Publishing on kottke.org is suspended until further notice. The situation in New York and New Jersey is still dire** so posting stupid crap seems frivolous and posting about the Sandy aftermath seems exploitive.

I found the missive curious. After all, we make sense of tragedy in our own particular way. If you are the fine purveyor of cat videos, then what better way to stand up to Sandy than to continue posting cat videos? Life marches on and all that. I don’t know if Jason makes a full-time living from ads on his blog or not, but that is usually a good metric for who continues to write after Sandy and who doesn’t.

Anyway, Jason was suggesting something else — that there’s a time a place for all things and his ten+ years of posting some of the best, most astute linkbloggery in the game was, at that moment, somehow not needed. What was needed were volunteers in Red Hook, power generators in Staten Island, and hugs in Breezy Point.

And all this left me in a curious state this past week. I live in Williamsburg, but on a hill, and not by the water. What I can say is that the incongruity between the carnage of CNN, the gas shortages, the subway closings, the flooding, and my own perch where the worst damage was slow internet and a tub full of wasted water was strange and disquieting. Life hummed on in my neighborhood as if nothing had ever happened and the video footage of the overturned cars, the fires, and tears couldn’t have seemed further from me.

On an existential level, and to Jason’s point, I was left with a strange feeling that my current life’s work as the owner a video game arts and culture company didn’t seem all that important. It’s how I make my living after all. But how did my current occupation speak to this current moment, if at all?

I’ve always believed that games, like any art form, should be able to speak to any aspect of the human condition. Yet at a party this past weekend in lower Manhattan, just hours after the big switch was flicked and light flooded to darker recesses of SoPo (that’s, um, South of Power), I found my conversations drifting towards Assassin’s Creed III. This left me, again, torn between my attachment to the fledgling medium and the relative immaturity of its output that I often find myself defending. It’s unsettling really — that lingering possibility that they are only games after all, and despite my posturing, they are no more able to speak to the human experience than any frivolity could. Bummer.

One possible defense is that games that deal with epic disasters — Crysis, The Last of Us, Fallout 3 — give us a window into the apocalyptic and a chance to flirt with an uncertain future without embracing its necessary horrors. A character in David Mitchell’s Cloud Atlas observes about the terrors of Alfred Hitchock:

The key to fictitious terror is partition or containment: so long as Bates Motel is sealed off from our world, we want to peer in, like at a scorpion enclosure. But a film that shows the world is a Bates Motel, well, that’s…the stuff of Buchenwalkd, dystopia, depression. We dip our toes in a predatory, amoral, godless, universe–but only our toes.

When I play The Walking Dead, I experience the desperation of an apocalypse. So when the possibility of a New York wracked with fear and suffering arises, am I somehow able to summon surrogate experiences to put my mind at ease? There is a light at the end of every blockbuster. But where are the games that genuinely cancel out the possibility of hope? Certainly, looking at the photos from Breezy Point, I get the sense that no game could actually access the tragedy of losing one’s home.

I suppose what I’m suggesting is the development of a true sense of tragedy in story-based games, a world not gilded by the adolescent desire for a triumphant ending.

So that’s one possibility.

The other is more pat but perhaps more telling. Some argue that games are objects of escapism and merely serve to distract. On its face, I find this argument insulting, but then again, entertainments have always served the social function of distracting people from their ills. The soccer game played by opposing Axis and Allied forces on Christmas Day during World War I was only a sideshow from the carnage that was to ensue the next day. But it was also a moment of humanity and hope. And perhaps that is the place where games shine. Maybe in the darkness and  of the Far Rockaways, there is a family playing Stratego by candlelight, and laughing.

There is a light at the end of every blockbuster. But where are the games that genuinely cancel out the possibility of hope?

The night of the hurricane, before my Internet lurched to a stop, I traded turns of Letterpress, the hot -shit new iOS word game you should be playing, with several friends. The wind was starting to gust, my girlfriend was receiving very frightening emergency text messages from Sprint, and I was propped upright, going to toe to toe with friends in other parts of the city. Even when the power dropped out and access to electricity became sparing for friends in Manhattan, each turn I received was a reminder that at the moment, they were safe, safe enough to be superfluous.