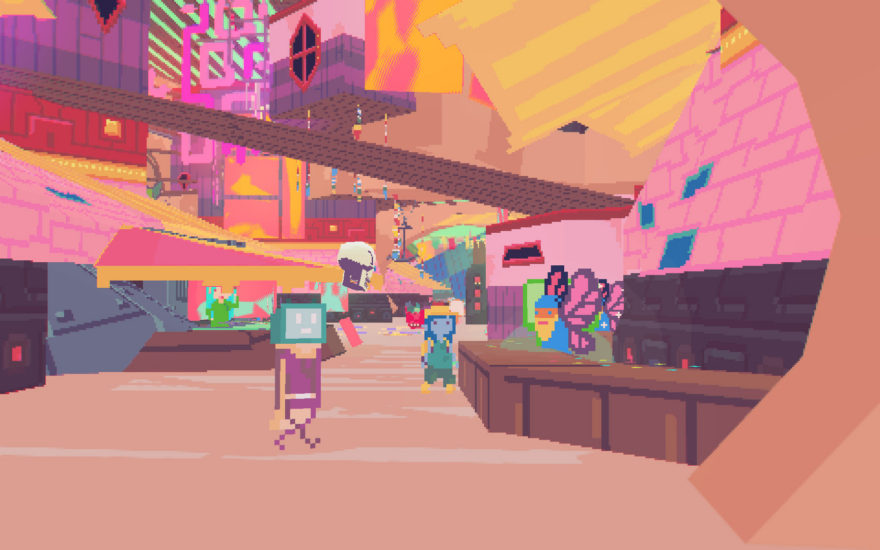 After nearly two years in the works, Sundae Month’s lo-res sci-fi adventure Diaries of a Spaceport Janitor has a release date; it’s September 16th, and will be available on Steam and itch.io.

Yes, there’s about to be a new trash person in town. As an Alaensee woman with a municipally-subsidized trash collecting job, you’ll take in the trash. Incinerate it. Take in the trash. Incinerate it. Routine is at the heart of Diaries of a Spaceport Janitor, as per the job. But maybe—just maybe—you’ll be able to get off Xabran’s Rock, the place that treats you so terribly, with a little bit of deviance.

As futuristic as it might sound, being a spaceport janitor is not an especially enviable position to be in. This is doubled by the fact that much of the spaceport “treats you like shit,” according to designer James Shasha. However, Shasha quickly adds that this is only a fraction of the experience—the game’s colorful and cute visual design offsets the reality of the situation—their idea being that Diaries of a Spaceport Janitor parallels the complexity of the world we live in. “It’s a critique of, like, wage slavery and capitalism as a method of consistently keeping someone in a certain place in society,” Shasha said.


In that way, Diaries of a Spaceport Janitor’s economy is inscrutable, inaccessible. Keep ‘em confused and they’ll stay in their lane, right? Sundae Month took reference from Porpentine’s text adventure Skulljhabit (2014) in regards to its relatively random payment system. In Skulljhabit, you’re not picking up trash, but shoveling skulls into a pit. You’re paid a nonspecific amount of money for your work. “She wanted to encourage players to build their own superstitions,” Shasha said of Porpentine’s system, “and figure out what things could affect how much money [they] get paid.” With Diaries of a Spaceport Janitor, the relationship between the amount of trash you burn and the amount of money you get paid is ambiguous—to a point. “There’s a sweet spot, that’s just ambiguous enough that you’re kind of confused, but just responsive enough that players feel like they can affect it, which is what we want,” Shasha said.

Gender—or lack thereof—plays a part, too. “Players step into the role and play as a femme-gendered or ambiguously-gendered character,” Shasha said, “and obviously you’re not human and there are no humans in the game, so it doesn’t make sense for it to be exactly analogous to human gender.” The aliens of Xabran’s Rock aren’t shy about their feelings towards you, as a femme-gendered janitor. Sundae Month used catcalling as a way to “evoke, sort of, this idea that you’re at the bottom and there are a lot of perhaps intersecting ways in which the spaceport treats you like shit,” Shasha added.

Despite the hardships of Xarbran’s Rock, Sundae Month wants the world to be a place players want to come back to. “We wanted to capture this feeling of wandering around and getting lost in this strange marketplace where lots of weird things are happening,” Shasha said. The obvious focus for the player is on trash—picking it up and burning it—but Diaries of a Spaceport Janitor‘s world hints at something deeper. The game is billed as an anti-adventure, but there’s something about its world that begs for adventure, for exploration.

See Diaries of a Spaceport Janitor’s new trailer on YouTube, and pick up the game when it’s released September 16 on Steam. Follow Sundae Month on Twitter.