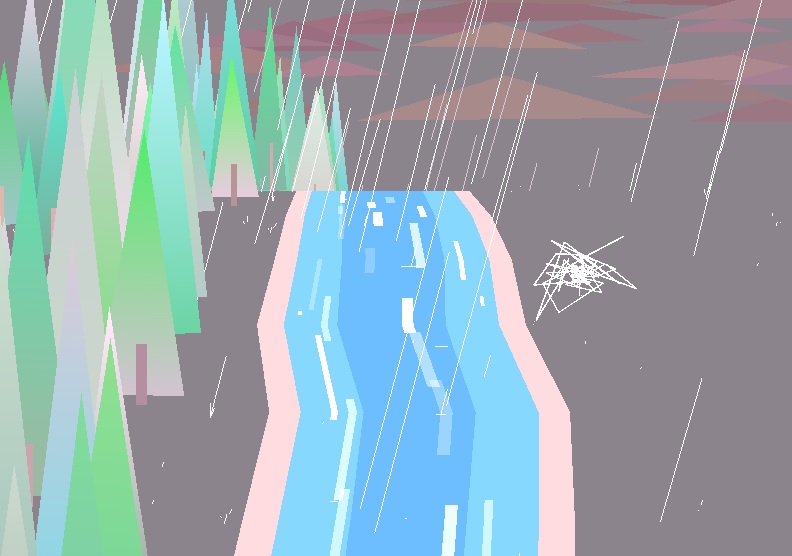 It’s a quiet day next to a peaceful river, the sun has set. A steady rain falls. It’s time to tell the forest to fuck off.

TELL THE FOREST TO FUCK OFF is a small downloadable game for Windows and Mac, created by Tak. Short and to the point, TELL THE FOREST TO FUCK OFF is exactly what you’d imagine based on the title. You, a small bipedal stick figure with a irregularly shaped head, shake with the kind of penciled-in rage of a mid-level bureaucrat, and then let it all out in an enraged yell, knocking down a nearby log. The forest has felt the might of your wrath.

The micro-game manages to capture an interesting feeling in being surrounded by nature, but also being incredibly frustrated. Naturalists have long created a relationship with the outdoors, and games have tapped into the more peaceful aspect of that, from watching a summer rain in Minecraft (2009) to exploring the cute loveliness of Botanicula (2012). But where is the frustration that American naturalist Henry David Thoreau mentions in the anger and prose of his writings—“the savage in man is never quite eradicated,” he once wrote—among these depictions of nature? That’s where TELL THE FOREST TO FUCK OFF steps in.

It’s a situation that’s less treehugger and more tree-puncher, but nevertheless still appreciative of the environment it encapsulates. “I think I just like the juxtaposition of a pleasant setting and being too mad to appreciate it,” Tak says. In order to “yell,” you have to hold down a button as the screen slowly fills with more and more white lines. Once released, they wreak havoc on the surrounding region.

The game was made over the course of about a week around New Years, and features random character and forest generation, which Tak said made it feel like “everyone gets their own little place.” The title, in all its profane glory, came first. The experience formed organically after the fact.

TELL THE FOREST TO FUCK OFF is free and available to download for Windows and Mac on itch.io.