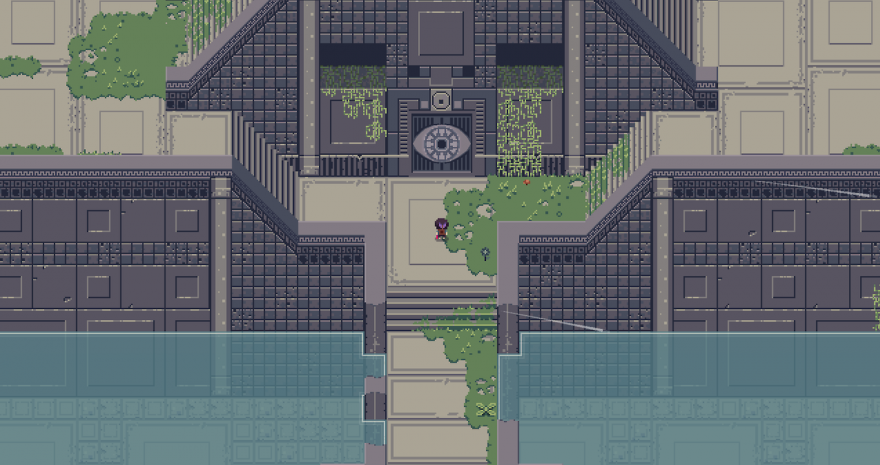 You start at the bonfire after you die, and you make the journey again, and you don’t have an option about it. You start at the bonfire. That’s where Mark Foster, Dave Fenn, and Andrew Gleeson, the trio of young developers behind Titan Souls, intend for you to start. Of course, they are much too polite to admonish you for your kvetching.

“I still don’t know,” Foster admitted from the Airstream trailer where we’re sitting, playing the game. “It’s weird, why are we at E3?” Foster and crew are at E3 because they won Ludum Dare in December of 2013 with an early version of Titan Souls. Their thoughtfully conceived top-down action game brought the attention of Devolver, who will release an expanded, upgraded version of the game roughly seven times the size of its predecessor early next year on PC, Playstation 4, and Playstation Vita.

Both the original iteration and the new one reward a patient, analytical approach and relentlessly punish carelessness. “We were worried when we made it—we’re proud of it—but it’s super-hard, so it’s a bit of a risky sell,” Foster said. “But people seemed to be into it because it makes it really intense.” And it is indeed intense. A grand total of one Titan was defeated in that trailer between three Kill Screen writers over the course of dozens of attempts. But there’s a purposefulness to this game, as there was in the Ludum version.

“In this [the Titans] get a lot more complex,” Fenn explained. The team also decided to base the health system more in reality, which is to say they made the process of dying much more abrupt. “So like if you take an arrow in the fucking face you’re dead,” Gleeson said. “It’s not like, ‘Oh a massive fist’s hit me, I’ve lost 5 HP,’” Foster added. But while these changes may make the game difficult, they also serve the much nobler purpose of teaching players to slow down, to think, and to approach their game with a certain type of respect. “You’re gradually learning,” noted Forster.

“It’s kind of avoiding a certain type of pacing. We’re avoiding the kind of game where you try over and over again rapidly,” said Fenn, “like we really want people when they start to fight to prioritize staying alive, and then their secondary priority is killing [the Titan]. They need to, like, really value their life in that moment.” And that’s why you you start at the bonfire: so you can spend the time on your way to the fight learning to value your life. And that’s really very good advice.