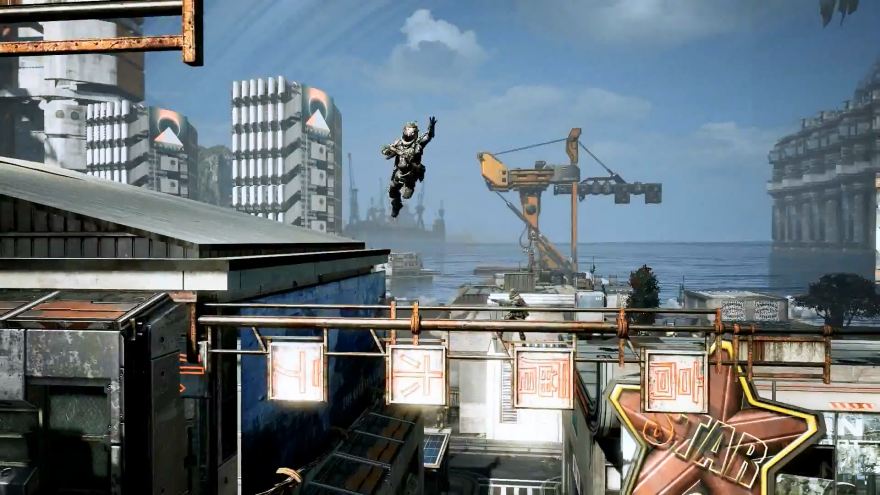 True Detective did not change the game. The HBO series came out hard with sharp writing, nearly impeccable performances, and cinematography that dazzled and contemplated, but it did not reinvent celluloid. Despite what the loudest voices on the internet and my apartment may think about the ending (we vehemently disagree), it’s almost universally accepted that this show helped reinstate the dramatic prowess of a shirted Matthew McConaughey and Woody Harrleson (with his variety of hair-thickness), and it also raised the profile of young writer/producer Nic Pizzolatto. True Detective accomplished this success through something maybe more difficult than changing the game: a thorough understanding of the medium of crime fiction, filtered through the history of cinema and television as well as their most expressive and captivating elements, and just nailing it.

Like True Detective, Titanfall came out swinging, and those who got in on the beta were instantly opinionated. It couldn’t be avoided, as the game’s cover image in Origin stated that the game had already won over 75 awards. Awards are bullshit but large numbers loom and 75 is a pretty large number. Surely Titanfall would have to be changing the proverbial game to earn such respect. This lured out the cranks. Comment boards across the web are drenched with pitchfork-waving, blunderbuss-packing, and “this that and the other thing did it better” painted on poster board.

These early criticisms of this team-based multiplayer online-only shooter—namely, that it clearly cobbled from the history of the genre—weren’t wrong. Titanfall isn’t anything we haven’t seen before: Quake had its arenas, Tribes and Mirror’s Edge brought fluid verticality to the table, the many iterations of Unreal Tournament and Battlefield ushered in hectic team-based mayhem, multiplayer online battle arenas introduced us to goons as target fodder, and Halo/Call of Duty/Counter-Strike have guns locked up. What’s Titanfall got that these games don’t?

Realistically, nothing, except the presence of all of them. Titanfall earned these awards by taking the best of those games and more, throwing them into a pot, and boiling it all down to a condensed, creamy soup. But it is delicious. The game that remains takes the tastiest cuts and cuts the gristle of kill-streak bonuses (12 kills in a row should be its own reward) and permanent perks (burn cards are pretty sweet because, let’s be honest, perks should be for those who need a helping hand). Some people like the fat, and good for them: they still have every game named above, and probably several to be released.

What’s surprising is how magnanimous the game is in its offering. Most of us don’t want to be benched for four quarters, and in that Titanfall respects every level of contribution. It’s true: if the best you can do is take down the grunts, then by all means do so. Hunting pilots for their higher point value can also lead to death by surprise and lost time, precious seconds shaved off your mech drop time and points that can be earned by picking out the hapless drones and their (mostly entertaining) chatter. Let the non-leet play and contribute, sayeth Titanfall, and so they shall; and hell, if you lose, even a successful evacuation feels like a small victory. Try the many game modes until you find one that fits; enjoy the maps galore (and to come) built to be parkoured around like you were a born ninja.

Let the non-leet play and contribute, sayeth Titanfall, and so they shall

It’s that thing you find, either hopping around and mowing down grunts or nailing headshots in a high-tier game, or doing anything inbetween, that matters in Titanfall. None of these “socialist,” “fun-for-everybody” adjustments to classic formulas would be worthwhile if the game wasn’t, yes, fun to play. Beyond even the well-curated design cribbing from the history of first-person shooters, Titanfall also rips from gaming’s first successes: The agility, [emoticon for kissy face], it’s simply bellissimo. Running around and double-jumping is a joy, sticky and slick where it matters. These maps were made to be thrillingly traversed and exhaustively explored—the first real sense of environmental freedom I’ve felt since Mega Man X.

And what is a falling Titan if not the logical extension of Mario’s super mushroom? You’ve gone from small to big, and now everything around you that is small (and within gun/punching range) should immediately prioritize its own safety. It is, notably, not invincibility; even the grunts carry rocket launchers. A goomba can shrink an overconfident Mario with impunity and the same can be said for many of my lost Titans.

In high school, I was conscripted against my will to play soccer. Our team was a mess: disorganized and mostly running around laughing like silly maniacs. We were 0-0 with two ties to our name. At the end of the season the parents were livid with the coach, sniping at him throughout our final pizza party about the losses, until he finally tapped a glass and asked the team if we had a fun season. We erupted in genuine cheer, good friends by the end with a lot of sad but funny stories about our “playstyle.” Titanfall, like my coach, was more concerned with fun than winning. This sense of dedication to a player’s good time by offering several ways to contribute, along with the on-point distillation of decades of enjoyable game design, is why Titanfall is already spoken of so highly.

Also, time is a flat circle, so you know, even if you lose, you end up back at the start, ready for another match.