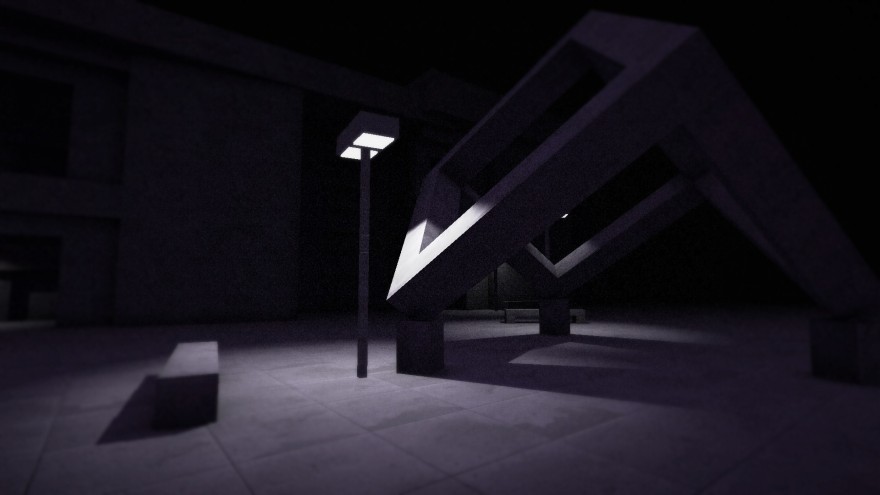 Here’s an idea: death is never scary in videogames. The lead-up is. The chase through the corridor, the misjudged jump soaring through the air, any tense moment spent clinging to the last slither of a health bar—it’s the uncertainty that’s scary. When you’re in a situation where you could die in an instant, you sit up straight in your seat, clench everything that can be clenched, and let out a mute scream. That’s terror. If death comes it’s a relief.

Tonight You Die, a new videogame by Duende Games, is an exercise in drawing out that uncertainty. It begins with a message on crumpled paper. “Tonight you die,” it says. It couldn’t be any clearer. You click to drop the note, revealing a dark blanket draped from the sky, it swathing a concrete urbanscape laid out before you. It is night. You have no time to deliberate. For it is now that you are expected to die. The paper said so. You are going to die.

But you don’t. At least, not right away. There’s time to walk forward. But how much time? Your individual footsteps have a satisfying bite—a waxy beat of “tack, tack, tack”—on the grey slabs. Is this the last thought you’ll ever have? You don’t know but you keep walking to find out. The city in Tonight You Die is in disguise. There are lamp posts and benches that suggest a degree of human civility exists here. As if the architect thought to light the way for nighttime wanderers, even a place for them to rest their weary feet. This is not the case.

The sight of a lamp post lighting a bench underneath a concrete tower goes from a curio to uncanny as it repeats itself. No matter where you go this basic scene doesn’t change and it becomes unsettling. More and more of these tableaus appear, stretching out for eternity, presumably having eaten the horizon long ago. You may try to outsmart this labyrinth by taking an unlit corner rather than following the appeal of light, or changing direction suddenly midway to your destination. This won’t work.

a victim’s last paranoid scuttle in the dark.

Only two elements ever change as you walk lost and alone through this brutalist maze, and you do not affect them. The first is the formation of the stone structures that accompany the lamp posts and benches. Some appear like inactive fountains while others are hollow cubes sunk into the ground. They could be pieces of conceptual art but given the visual fuzz and impending doom of the experience they’re closer to monuments of suffering. Along with the steep, sharp raises of the monstrously tall buildings near to them, these carvings have an unspoken malice in their tense anatomy.

All of this is second to the only other deliquescent aspect of Tonight You Die, and it’s perhaps the most important part of all: the music. LA-based group GRYPT provides a recipe of undulating drone rumbles and menacing horror textures that scrape like fingernails down your bones, ignorant of any flesh. As the sounds grow louder so, too, does your fear of the unknown. A noise of gates opening, stalkers creeping, turning your exploration into a victim’s last paranoid scuttle in the dark. Everything behind you is the killer.

Tonight You Die is a potent music videogame. It doesn’t seem to be one at first, but upon finishing it once or twice its single song structure should be apparent. It differs from other music games in that it doesn’t beatmatch or have the environment dance. Instead, it drills down on the imminent nightmare reaped in GRYPT’s song “Tonight You Die.” Singer Romie Romak’s ghostly incantation of a death incoming is turned into a terrorscape made of ominous masonry. Now that’s scary.