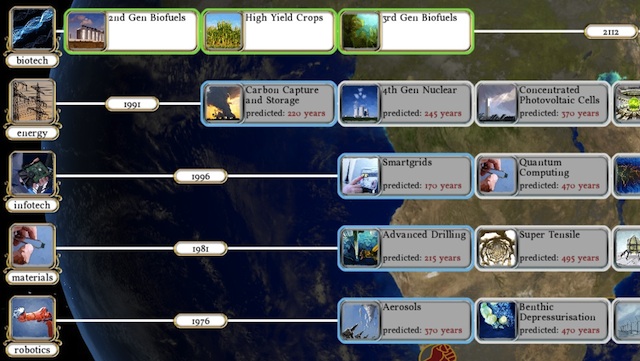 The end of the world is always a bit of a bummer.

There was the time that oil production ground to a halt and war broke out like a rash. I quit out of that session, assuming nuclear armageddon wasn’t far behind.

Then there was the time when my less-than-stellar environmental policies led to Roland Emmerich-scale disaster. To the residents of Southern Africa: I’m sorry about the flooding. And the extinction of the white rhino.

But the times that really got to me were the times when I was fired. When the nations of the world would just decide that, no, they didn’t want me dicking around with their economic, social, or environmental policies. These are always the worst because, while the end of the world sucks, nothing’s worse than being disliked by everybody on the planet.

Every time I start a new game I abandon my optimism at the menu screen: I have to get used to the idea that I will never win a game of Fate of the World.

Had it been released 20 years earlier—at the height of the edutainment boom, with Where in the World Is Carmen Sandiego? and Oregon Trail—Fate of the World might’ve been a household name. It could’ve been a game that frustrated a generation, instead of a game that just frustrates me. It belongs back in the era where learning and fun weren’t mutually exclusive. In Red Redemption’s PC game, you play the head of a global environmental initiative meant to keep countries in check and ensure that we don’t all drown in melted glacial water. Basically, you play as Captain Planet and Dominique Strauss-Kahn rolled into one (minus the sexual harassment). You are supposed to stop the world from its collision course with natural disaster, but if you’re me, it never really turns out that way.

Most of the game is spent looking at the globe, a sort of guilty reminder of what’s at stake. Every turn, I play cards to enact a new policy in a region. There are several types of scenarios, but they all have a long-term objective along the lines of “don’t die before a certain year.” The first time I played, the very first time, I played with a casual obliviousness to the ecological issues at hand. I was going to be President Salgado, broker of world peace, feeder of the hungry. India, Southern Africa, and Northern Africa were given the bulk of my attention, as I overhauled their education and medical sectors and propelled them into untold levels of prosperity and a newfound ability to tell awful “First World problem” jokes. There was one problem with this: their newfound level of wealth also came hand-in-hand with more pollution and higher emission levels. I raised the quality of life of millions, and somehow destroyed the world.

Yet the opposite tack, employed more out of spite than a motivation to win, didn’t do much better. The goal was to lower emissions and the causes of global warming and ecological chaos, but not to outright ruin the quality of life of a nation. If a region thinks it’s being ignored, it will kick you out, limiting the scope of your policies and money that can be used to play cards. That’s why Fate of the World is so frustrating: because it doesn’t limit me in any specific way, it doesn’t push me to an ideal solution. Instead it lets me form and implement a plan with a tremendous amount of freedom, only to show how it can and will fail. Stop oil production? Well, what’s going to replace those energy needs? Also, I’ve screwed up the Middle East’s economy, and they’re not happy about that. China is now leaning heavily on coal now, too, so, I’m back to square one. Fate of the World frames each decision as an ecological one.

I raised the quality of life of millions, and somehow destroyed the world.

I feel at this point that I have to be say that I believe in climate change and that we humans have something to do with it; and that means that I believe that every decision I make eventually becomes an ecological decision. This is a stance taken by the game as well, so if you don’t share that belief, maybe you won’t enjoy playing Fate of the World. Maybe a lot of other people also believe in climate change, but it’s become weirdly taboo to talk about with strangers. In my day job I exert the least amount of effort to make human connections with people, and that means that I lean on the weather regularly to make up for the conversational effort I’m not willing to put in. Toronto has been going through one of the mildest winters in its history: snow hasn’t been able to stay on the ground more than a few days. We had 70-degree days in February, when we’re normally neck-deep in snow; and after a strangely snowless winter, we had snow in April after a stretch of spring weather. A portent of the End of Days if I ever saw one. But none of my thousands of strategically asked “How about this crazy weather?” has yielded a single sentence about climate change. Not a single one.

For all the videogames that take place in post-apocalyptic worlds, like Bastion and Fallout, it’s Fate of the World that provides the bleakest outlook to the future. I recycle (sometimes, when it’s convenient) and I planted a tree once, but that’s insignificant. It’s a drop in the bucket. Even changes on the macro level, the ones that affect whole parts of the world, might not be enough. A part of me thinks that we’re all doomed and that I might as well give up right now: What can I do? What am I, really, if not the slightest fraction of a percentage point in the grandest scale of things? What is the point?

And yet, I keep trying to save the world, one more time.