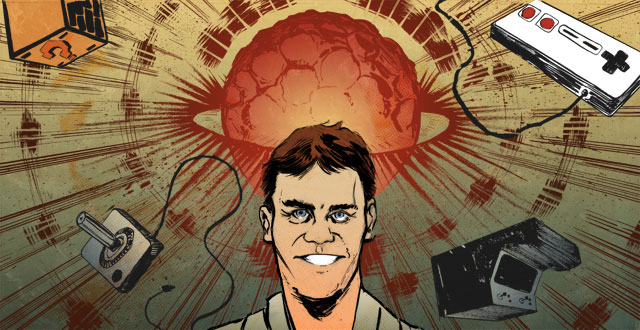 Two years ago, I was running late. This is not unusual, but in this instance, I was at a conference called DICE in Las Vegas, and my tardiness had a particular consequence. I had check-marked a particular talk on the schedule by a Carnegie Mellon professor named Jesse Schell. The title was innocuous enough: “Design Outside the Box.” The response was not.

Schell’s talk on the implications of games on everyday life and mundane activities like brushing your teeth presaged the coming fixation on “gamification”—a term that has been used to describe the influx of game mechanics into non-game activities. At this year’s DICE, Schell “debated” Brian Reynolds, lead designer at FarmVille maker Zynga, on the concept of gamification, and one word kept popping up in the dialogue: pleasure. Schell spoke with us on what pleasure has to do with games, and why FarmVille isn’t the same as gambling:

This is a basic question. What is pleasure?

I don’t have any formal psychological training, but there’s a lot of debate over what that word means. I would say it’s just things you like doing. We don’t understand pleasure very well at all. You use the word pleasure and people start making sex jokes. It’s an area we’re not comfortable talking about.

How did you get interested in this idea of pleasure?

I’m an entertainer and I make games. I’ve talked about where games were going for a while, but usually no one cares what I say. I had a realization that this gamification talk was just the tip of this big iceberg that people weren’t aware of. The iceberg is that the nature of design is really changing. It used to be that design was about efficiency and effectiveness, but now it’s about what people find pleasurable. You’ve been seeing it bit by bit over the 20th century. Something fundamentally has changed in the nature of society.

You create games for a reason: to be pleasurable. If it’s not pleasurable, you don’t want it. What happened is that people are realizing that game designers know something special. They have special knowledge which other people don’t have, and that could be applied to all kinds of things. What gamification means—it’s not making everything into a game—is understanding what’s wanted. So how do we take this knowledge, and how do we adapt it to things that aren’t games and make those pleasurable?

Since game designers have all this power, do you think they need a formal code of ethics?

I talk about this explicitly in my book, and I invoke one, but not in any formal way. Game designers can’t have it both ways. You can’t say that game design is important but [you] don’t have any ethical responsibility. It needs to be important and stand up to moral consequences, or you need to say that it’s trivial. People should be responsible for what they do.

That makes me wonder if game designers will be regulated someday if they don’t regulate themselves. It seems like some opportunistic politician could point to a constituent who’s spent all their money on FarmVille and argue that games need to be controlled like gambling does.

The question is, what is people’s potential to ruin their own lives? People can ruin their lives with anything. That’s what Don Quixote does—he’s a man who ruins his life through too many dreams.

Gambling is a special case. I don’t believe it’s regulated because it ruins people’s lives. The reason it’s regulated is because people would run dishonest operations. If you run a dishonest gambling operation, then people take the law into their own hands. That’s a problem.