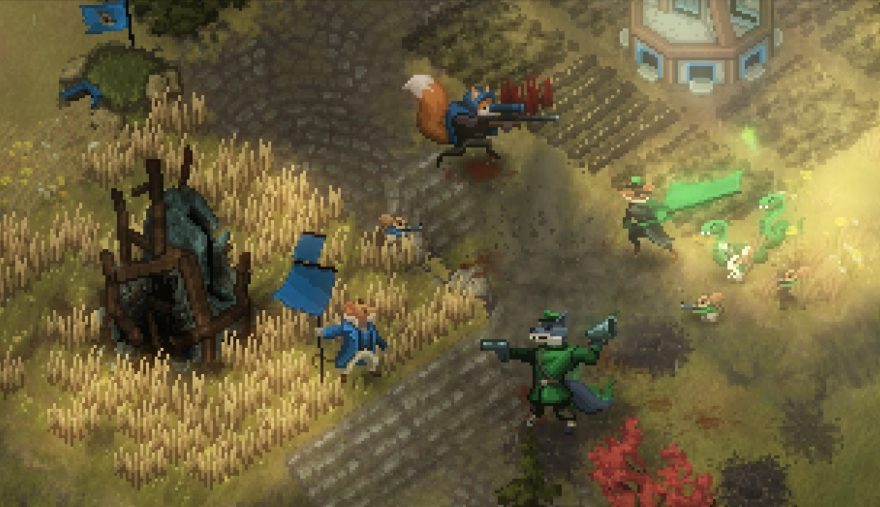 Pocketwatch Games, the studio that brought us bungling co-op heist game Monaco (2013), is back with Tooth & Tail, an arcade-style strategy game based on the Russian Revolution. While still deep in the development stages with Tooth & Tail, the studio does have a video that shows how matches are able to play out in under 20 minutes (pretty quick for a strategy game). The trailer is truly a teaser of what is to come, with a few shots of a battle between mice carrying contrasting colored flags and tearing down the castles of their enemies.

As the title alludes to, Tooth & Tail has you controlling a mice faction of up to seven units or structures that must destroy the other faction to avoid being eaten. Yes, you heard that right. “Food is a natural currency in an animal world, and so the events of Tooth and Tail are all built around meat and starvation,” said Andy Schatz, the developer behind the game. “Tooth and Tail‘s revolution is driven by factions that differ on who gets to eat and who must be dinner.

Tooth & Tail was directly inspired by classic real-time strategy games like Command and Conquer (1995), but it comes with a simplicity that mirrors competitive chess rather than, say, an expansive experience like Company of Heroes (2006). The controls, which are meant to be played with a gamepad over a keyboard and mouse, fit the usual adage—easy to learn, but difficult to master. Schatz said that this design was to help bring in a broad variety of players to the strategic genre while still delivering an entertaining brain burner.


Beyond that, there are certain historical parallels with the game to consider. As World War I began creeping up on the Russian Revolution, food became the most valuable resource. Supply was either non-existent or too expensive for the average citizen to purchase, especially in St. Petersburg, the capital. On top of that, farmers would often hoard food for their own use. The brutality of the animal world is often blurred with the human world during times of war. This is put on display in Tooth and Tail, where food is the No. 1 thing on your faction’s mind, even if it means death.

Interestingly, Tooth & Tail has already built a community before the game has been released. With a Discord channel, multiple tournaments and an active Twitch stream, you can already see plenty of buzz building around the game.

Find out more about Tooth & Tail on its website.