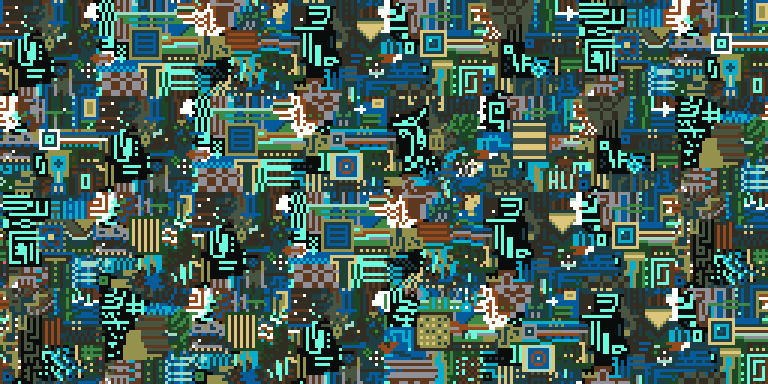 If there’s one artist who knows what it’s like to make art quickly, it’s Michael Brough. When I asked him for his help to track down all the games he made this year, he made me a list of seven games and said it was a “slow year.” After a string of successes last year (including the wonderful Vesper.5) Brough has continued being unsigned hype, making games that feel like alien love poems sung by computers.

Become a Great Artist in Just 10 Seconds was made with Andi McClure for the Ludum Dare game jam. Each level gives you a goal (a portrait, a landscape, Starry Night) and then asks you to replicate it. My usual method is to randomly stab keys on the keyboard and try to recreate the stargate scene from 2001: A Space Odyssey. You won’t learn to paint the classics, but you will have an excellent glitch art maker of your own.

Brough’s breakout hit of the year is 868-HACK, a game that I can’t recommend enough. It’s a small, tightly focused roguelike with a surprising amount of depth. 86856527 is the germ of the idea made for the 7 day roguelike challenge. They both look and play similarly—you’re still guiding a smiley face through a 6×6 grid collecting points and avoiding enemy programs—but playing them back-to-back reveals the small flaws that make 86856527 too oppressively difficult. Among other things, 868-HACK proves how helpful a tutorial can be, and how inspiring leaderboards can be.

Experiment 12 is a compilation of short games from various indie artists, each riffing on the idea of a person escaping a facility. Who is this person? What did they escape? Where are they going? Each of the games attempts to ask those questions. Brough’s game is clever and a bit maddening. You guide the patient out of the facility, and when you do, another screen with another patient in a different maze pops up. Now you have to guide both of them to the exit, your movement affecting both characters at once. Get to that exit and you control three characters. You can see where this is going: This is Brough at his flashiest, like an infomercial salesman screaming, “But wait, there’s more!”

scarfmemory is as far away from Brough’s alienating circuit boards and glitch aesthetic as you can get. Using the text-based Twine, Brough tells, through straight-forward prose, the story of a scarf that he made, and its loss. It’s a simple story, simply told. Brough uses the hypertext format to go on parenthetical asides and ramble, but he avoids easy melodrama and broad emotions for a very specific story. This is easily the best game about knitting this year.

While most of Brough’s games are meditative or ask for a bit of patience, Post-Future Vagabond isn’t afraid to throw an enemy right away and announce it with a cyber-yodel. It’s a twitchy, fast-based shooter: Move around the grid collect bombs and blast your enemies to move to the next level. The usual structure unfolds. More levels unlock new wrinkles and enemies and power ups. Except that Post-Future Vagabond is part of the SHARECART1000, a group of games that share the same save file. Play one of the other games in the SHARECART and Post-Future Vagabond warps. Maybe it’s slowed down, maybe you’ve jumped a few levels, maybe you die instantly because you suddenly have no health. Like so many other games by Brough, there is the game, and then the game that you think you’re playing. Through his career, he’s become adept at creating these moments when you finally see past the cold logic of a game and find that there’s something altogether much weirder underneath it all.