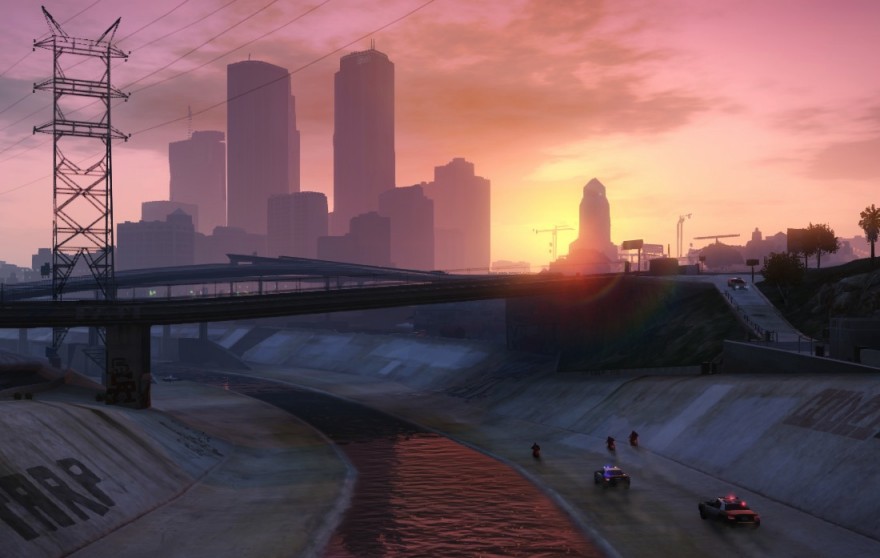 There’s a lot to discover in Los Santos: from the beaches to the celebrities to those cool masks on Vespucci Beach, it’s pretty damn difficult to summarize it all in just one list. It’s a difficult game to quantify: too big, too various, and probably too over-exposed to tally up. So, don’t worry about having to choose between “Top Ten Misogynistic Quotes” or “Top Ten Outfits for a Beachside Massacre.” It’s a game about having it all, and so you, reader, should have all the lists we’re not running about this game.

1. Top Ten Songs to Have Playing During Run-Ins with the Police

Example blurb: Down on your luck? Driving a stolen semi-truck down the PCH while surrounded by eight police interceptors? Take a word from the wise: context is key. Flip on Los Santos FM and prepare for some smooth Bush-era magic with 2005’s catchy serenade  “Glamorous” from Fergie. Her keen commentary on the anxieties of success in the early 21st century can’t help but ease your mind as you pull out a grenade (or four), and dream of the “flossy flossy” as those Crown Victorias fly off the highway.

2. Top Ten Worst Choices I Made in the GTA Economy

Example blurb: I’m not a fickle man. I shop the sale racks, take advantage of the nearby falafel house when I can, and consider shopping on Cyber Monday. But when I’ve found the perfect car somewhere on the streets of Los Santos, I can’t help but get a little…extravagant. My Übermacht coupe had nearly $50,000 of upgrades, tune-ups, and retouches, and, boy, did I fly around on those hills. But then, caught up in a drug deal that I didn’t even expect to be violent, my baby saw the bad end of a sticky bomb. Welp, bye-bye ÜberBessie. Hours of yoga ensued for karmic peace.

Example blurb: There’s no one in GTA quite like Mary Ann Quinn. How often are we incentivized to work out in this game, or ever? When a 45 year-old soccer mom clad in Lululemon is screaming that she’s going to outrun your ass, you get … going. I’m not sure which felt more satisfying: her potty mouth ripping apart the size of my penis, or the strange affection toward her that I felt afterwards.

Example blurb: Los Santos is supposed to feel vast, infinite. It’s not merely a playground to rob banks, get wasted at strip clubs, and hijack airplanes. And, while it’s nice to blow off some steam on the back nine at the Rockford Country Club, nothing beats a ten-minute tourist bus tour of Vinewood. The game’s script kicks into high-satire mode and you can watch fast food restaurants, the rich-people architecture, and the immaculately designed billboards slowly roll by in the sunset.

Is anything more satisfying than driving down the American highway, especially when it feels a lot like the Autobahn?

Example blurb: Crucify me if you wish, but I’m a sucker for some GTA vintage. There’s nothing quite like the Banco in San Paleto Bay. I know that the scent-generating controls Microsoft prototyped were eventually discarded, but I swear that I can immediately smell the mothballs when I enter. I mean, where else are you going to find old bowling shirts in San Andreas? Neon-green work pants? Definitely not at Suburban … fuck those yuppies.

6. Top Ten Best Excursions to Take Out of the City

Example blurb: Is anything more satisfying than driving down the American highway, especially when it feels a lot like the Autobahn? San Andreas is your oyster, and the easy theft of those computer-generated cars beckons for you to crack it wide open. If you’re feeling adventurous, head to the exotic redneck farms just west of Sandy Shores. Chat about incest with Bob, Jim, and Bob, and consider just how damn impossible it is to treat every interest group with fairness while you cook up some meth with Mary Sue next to the outhouse.