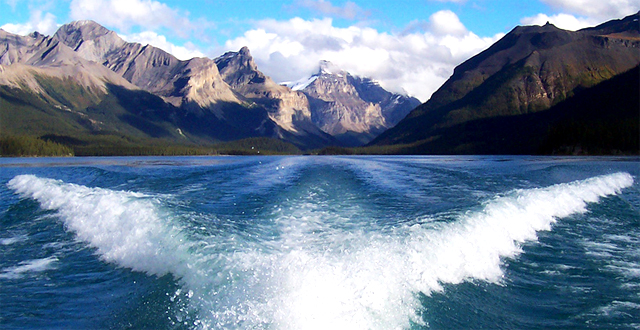 Some of us have trouble sleeping. We place our heads on a pillow and we’re forced to acknowledge all of the personal, social, and global fears that exist in the backs of our minds. We hesitate to linger on them in our waking hours: We change channels in the middle of a news story, we fly through Google Reader, and we direct our focus onto escapist media that we can process without facing our mortality.

The solution to this existential problem is disguised as a solution to a practical problem. We have somewhere we need to be, sooner rather than later. So, we thought, “Speed would be nice.” Our cars got faster, followed by our news sources, our films, our restaurants, and our Internet. We gained an outlook on the world that made sense of this madness, if only barely: “I’ll sleep when I’m dead.”

In Hydro Thunder Hurricane, as with most videogames, we’re never really dead. On the contrary, all human frailty is cast off in exchange for the pure power and mechanical nature of the speedboat. We no longer need to sleep. We don’t even need to slow down. If the game has a brake button, it is the rare player who is actually aware of it. There are only two speeds: boosting and not boosting.

Hydro Thunder Hurricane portrays speed in such a way that it seems like a defensive and necessary response to the world. Probably its most memorable course is Area 51. Never mind that the game manages to credibly set the infamous warehouse (in reality, nested in the middle of a desert) in an unknown body of water. It also brings to life every speculation and fear we have about what that warehouse represents. As we speed through Area 51, we stumble upon secret military operations, brutal human experiments, and a portal to an unknown alien world. We are brought face-to-face with a government that is uncaring, secretive, and disloyal to its citizens. We are referred to as “intruders” and “unauthorized personnel.” The further we delve into Area 51, the more disturbing these realizations become, culminating in the voice of our government pledging “allegiance to our alien overlords.”

There is no way for us to engage these problems in Hydro Thunder Hurricane. Imminent disaster and dilapidated environments are only a means to acquire more of that invaluable commodity: boost. The announcer serves no purpose in this game except to remind us of the same thing over and over again. We need boost, because we need to go faster. Whenever we acquire boost, the announcer shouts, “Ready to boost!” or “Hit that boost!” Miss a boost? He reminds us that “you could have gotten that with a boost jump!”

Every course asks us to stop, look, and take in the surroundings. Some of them place us in the best possible position to view their beauty. Others put us in precarious situations. At times, we pass by natural and manmade landmarks. Other times, we feel our surroundings closing in on us, threatening our destruction. If nothing else, these settings and locations demand a measure of respect, but we don’t have time.

Even when danger isn’t imminent, the tendency to speed through our surroundings remains. The sewers of Paris and a racetrack in Tokyo would be beautiful if they weren’t mere collections of blurs and ramps. Bits of the scenery are obliterated merely because they stand in our way. It’s no wonder, then, that when we visit the gods during a race in Asgard, they do everything possible to destroy us. Every time, our own desperate acceleration refuses defeat and we emerge victorious against them, even if we remain in eighth place.

There are all kinds of ways to distract ourselves from our surroundings. Still, we have to acknowledge that the game itself is only a temporary escape. Each race inevitably drops us back into a menu screen, where we have to make a conscious decision to continue. Eventually, we will have to put the controller down and turn off the console. We’ll have to face life.

If you’ve ever tried going to sleep after a day out on the boat, you know how tricky it is to convince yourself that you are finally on stable land. The bed seems to tilt and warp with the room when your eyes close. Imagine, then, the sense of extreme restlessness that the Hydro Thunder racer might experience at night, having spent the day floating on a liquid foundation, flying off of waterfalls, and rebelling against fate.

Top Down is a monthly column about the worldviews expressed in games.